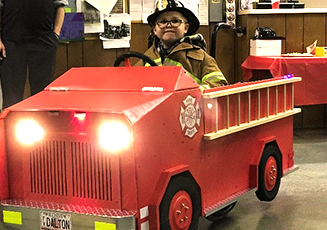 Every year at the end of October, millions of kids dress up in funny clothes to take over the streets in communities across America on a mission to collect all the candy. Sweets aside, for most kids, part of the fun is making an important decision: what they’ll be for the big candy collection.

For kids in wheelchairs, costume choices can sometimes seem limited. But thanks to Magic Wheelchair, a nonprofit organization that creates custom costumes for kids with disabilities, the field of choices is widening — and putting a smile of the face of every kid in a wheelchair while giving the rest of us some serious costume envy in the process.

This year, Magic Wheelchair and a Rockford-based build team, ScaryHouse, teamed up with MDA to choose a special kid with big dreams and an even bigger heart to receive one of these custom costumes.

Dalton Harvey of Franklin Grove, Ill., is an energetic 11-year-old boy with Duchenne muscular dystrophy who also has autism and is non-verbal. He’s also enamored with all things firefighters — which is why ScaryHouse stepped up to create an amazing fire truck costume to fit over Dalton’s wheelchair, completed with his own authentic firefighter uniform and all the bells and whistles (literally). 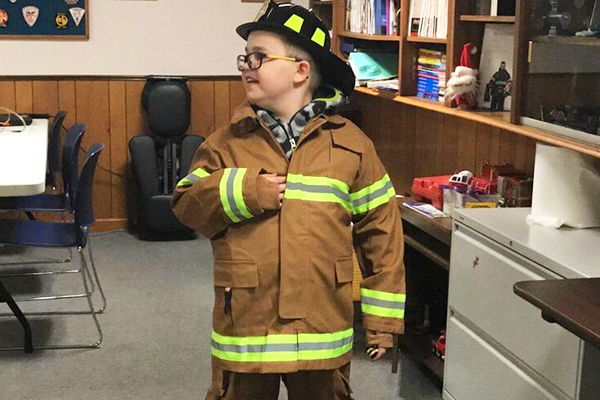 Four builders from ScaryHouse dedicated approximately 40 individual hours for development and another 50 hours for the actual build of the costume during the course of four months.

Once the costume was ready, members of the Franklin Grove Fire Department, who also happen to be close friends of Dalton and his family, offered to host a special reveal party on Oct. 22 to mark the occasion. Although Dalton is non-verbal, his smile in reaction to seeing the costume for the first time spoke louder than words. 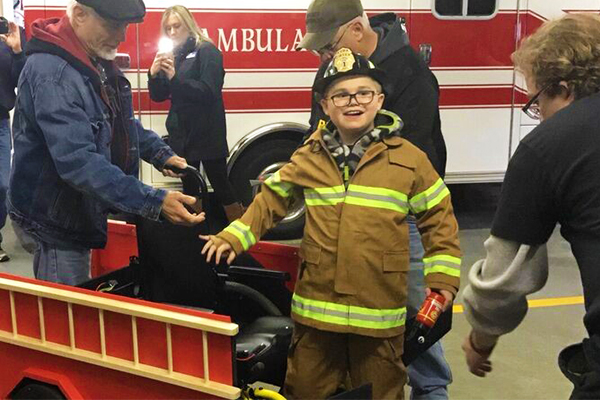 “Dalton couldn’t wait to get into it,” says ScaryHouse director and build team leader Dan Gildea. “The Franklin Grove Firefighters went to Dalton’s house with their big engine to pick him up and bring him to the fire station. He is familiar with the station and he went around and ‘inspected’ all the engines and emergency vehicles. Then the firefighters helped him into his own little firefighter overalls, jacket and helmet. After all that, he was delighted to end up with his own fire truck.

“Kids in wheelchairs are bound to tackle life in a different way than the rest of us,” Gildea says. “Their wheelchairs impact nearly everything they do. I imagine it’s always a little less inspiring to have your wheelchair affect your costume so dramatically. We wanted to build a costume (for Dalton) that enhanced the wheelchair so that it became an asset to the costume.” 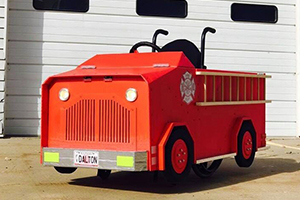 When asked about his favorite part of the costume, Dalton immediately put his finger to his lips and said “whoo, whoo, whoo,” which is his sign for fire truck.

“The truck is the clear favorite,” says Dalton’s mom, Tammy. “But getting the suit was amazing for him too — he wanted to put it on right away. And for the fire truck to actually have all the working parts was just amazing. All of those elements make it an incredible design.”

After pulling out all the stops to make the costume reveal extra special for their buddy Dalton, the Franklin Grove firefighters put their newest “recruit” to work putting out a (prop) fire using a real fireman’s hose: 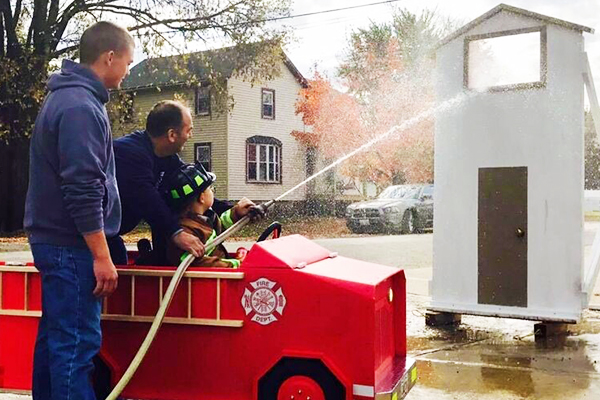 Tammy, who is the principal at Ashton Franklin Center Jr./Sr. High School in nearby Ashton, Ill., thinks Dalton’s firefighter fascination is fueled by the continuous love and support he receives from these hometown heroes.

“I guess (his interest) comes from our close friends in the department,” Tammy says. “Every home (high school) football game, we go out to the ambulance to see all these guys and they are so patient and kind. Every single game they take him through, let him wear a vest, give him stickers, let him sit on the gurney, go through every single drawer. They always make him feel welcome.”

For Dalton, not much can top hanging out with his firefighter friends — except maybe when they make a visit to MDA Summer Camp.

“That’s his favorite day at summer camp — the firefighters,” Tammy says. “If you ask him what he looks forward to the most about going to camp, or what his favorite part was about camp after he returns, it’s always ‘whoo, whoo, whoo!'” 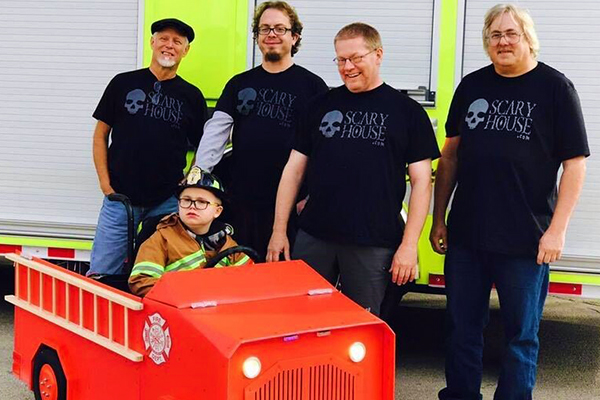 So what’s next for Dalton and his fierce fire engine costume?

“We’ll have to contact his school to see if he can bring the truck,” Tammy says. “It might be a bit much to have the sirens going there all day. But we go trick-or-treating in Ashton, so he’ll take it out then. And I know it’ll be out at our house all the time.”

As for Tammy, she hopes that people see the power in having a strong sense of community after reading about her family’s Magic Wheelchair experience.

“From MDA recommending Dalton to ScaryHouse wanting to do this for a child that they don’t even know, and for the fireman to do all this for just one boy in their town … all of those entities coming together to make a kid’s dream come true is an amazing thing.”

Sign up to learn more about how you can help kids like Dalotn live longer and grow stronger.