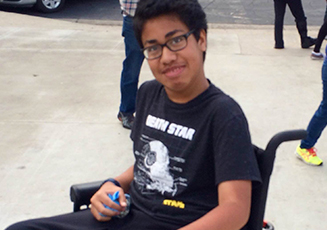 Aaron, 16, is an avid fan of rock music from ’70s to the ’90s — he looks up all the facts about songs, composers and artists as he is listening to them.

“He is a veritable fount of trivia on rock music,” says his dad, Richard.

Aaron, who was diagnosed with muscular dystrophy in early 2007, takes piano lessons now and plays keyboard in his church praise band. In between his studies as a junior in high school and taking college prep courses, he likes to hang out and jam with his guitarist friend Ray.

Ray recently started a GoFundMe campaign to raise funds for a mobility van for Aaron so they can go to concerts, festivals, conventions and, of course, jam sessions.

Being involved with MDA has been Aaron — and his family’s — jam, too.

After Aaron’s diagnosis, his family met an MDA representative who helped get the family involved in local events.

Richard was invited to be a Jailbird at an MDA Lock-Up event nine years ago and has been a “repeat offender” ever since. He and other community leaders join forces with MDA and agree to be “locked up” at a networking luncheon event to raise money for their “bail.” Donations raised help kids and adults break free from the harm of muscle-debilitating diseases.

This year, Richard raised more than $5,000 at the Bakersfield, Cali., MDA Lock-Up event — making him one of the “most wanted” in the state.

“With my busy schedule, I am able to do quite well through the Lock-Up participant center website and by sending out emails,” Richard says. “In my emails, I share that Aaron and I hope that a cure for muscular dystrophy is found in his lifetime.”

For those looking to get involved with MDA Lock-Up, Richard offers some words of encouragement.

“Just keep thinking that you are contributing to research that may one day save many lives. One of the benefits is it personally challenges you to meet a fundraising goal — and even exceed it — and spread the word to your contacts about this debilitating disease that strikes so many boys and girls.”

Aaron, Richard and a few firefighters from the Bakersfield fire department have also participated in the annual MDA Fill the Boot event. Richard has had great times helping and getting acquainted with local firefighters during the event.

“We’ve been working with Capt. Scott Dragoun for 10 years — he’s a champ,” Richard says. “The guys give up their day off to raise money for kids like mine. I’m just so proud because they typically raise significantly more money than other much larger departments around the state.”

Want to participate in an MDA Lock-Up fundraiser?

Find a Lock-Up Event Near You

Creating a Network: How Hiring PCAs Gave Me Confidence and Independence, In College and Beyond