Mindy Henderson was diagnosed with spinal muscular atrophy at 15 months. Her parents were told she would not live to be 3 years old, but Mindy has far surpassed and exceeded expectations. Mindy now holds multiple degrees, has a successful career and is happily married with a daughter. Mindy has a passion for making the impossible possible and sharing her story with others. 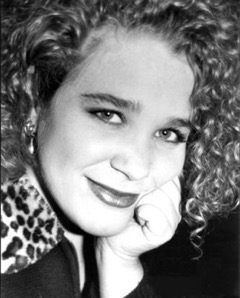 We finally met when I was 15, and you made me feel pretty. I had watched you from afar for so long, but you were forbidden. You were a fascination, and once I was old enough, you were as good as I thought you would be.I was self-conscious and shy and awkward. My physical infirmities made me feel ugly, but you gave me confidence. It is true, what they say — you took my natural self and enhanced it. And for the first time, I believed I might be pretty.

Strangers told me I had beautiful eyes. You helped call attention to something besides what made me feel unattractive and unlovable. You were more than a $5 tube of black ink from the drug store.

We’ve had a lot of good years together, but lately, your wand has become too heavy for my weakened arms to raise. My fingers struggle to hold you at the proper angle, and I’ve suffered from eye-poke syndrome and raccoon-eyes in increasing failed attempts to sweep my lashes into graceful doe eyes.

I’ve fought to give you up. I’ve tried going without, but I feel inadequate again without you. I’ve tried letting others help, but the eye-poking continued and much as I love you, I also love my eyesight. And, as with most love triangles, this one can’t continue.

So we are at an impasse. My hand has been forced. I choose my eyesight, and I have to let you go.

For a while, I mourned the loss of you, and more so, I mourned what the loss of you represented. It frightened me, and saddened me, but after I surrendered, an amazing thing happened. I found a new love. I went on a blind date with eyelash extensions … and once again, I felt attention move to my eyes instead of any disability.

I know what you might be thinking — this is a superficial relationship. And it is. But there is something deeper there, too. I see loss as I look in the mirror each morning. But dangit — I’ll be darned if the broken reflection that stares back doesn’t have doe eyes.

Sign up to learn more about how you can help MDA families live longer and grow stronger.