In the summer of 2014, the ALS Ice Bucket Challenge took over all of our Facebook feeds. What started out as a curiosity – why is that person I haven’t spoken to in three years dumping ice water on their head? – turned into a viral sensation overnight. Chances are you were probably challenged by someone you knew.

When I first learned that this spectacle was being done in the name of ALS research, I wanted to learn how it got started, and more importantly, why. Soon enough, I came across the story of Pete Frates, an ALS patient who helped start the Ice Bucket Challenge. As the phenomenon garnered worldwide attention, attracting athletes and celebrities, I felt a mixture of happiness and sadness. I was happy that ALS was getting so much attention, but I was also sad that it started because patients like Pete were being diagnosed with this devastating disease in the prime of their lives.

I was drawn to Pete’s story in particular because he was a Boston guy like myself. In addition, he was a former baseball player at Boston College, and as fate would have it, I was headed to Boston College in the fall of 2014 to start business school. I saw how the BC community rallied around him, even before the Ice Bucket Challenge, and it helped to reassure me.

As someone with an adult-onset form of muscular dystrophy, Miyoshi myopathy, I was nervous about how I would be accepted by my new classmates. I could barely walk and used crutches to get around, and I would need help from classmates to hold my backpack and pick me up if I fell. His story gave me hope that I was entering a community of support.

Business school turned out to be one of the best experiences of my life, but it was incredibly difficult. It was a mental and physical grind for two years straight. The mental toll of classwork, exams, group projects, moving to New York City for an internship and finding a job after graduation made getting a good night’s sleep difficult. Additionally, my body buckled under the stress, and I lost a significant amount of strength during this time. I was in physical pain constantly, and there were days and weeks where I was feeling down. But my classmates kept me afloat. In fact, two of my classmates knew Pete personally – one played baseball with him and the other was a grade below him in high school. They both spoke highly of him.

In addition to the support of my classmates, friends and family, I also sought out stories of inspiration during this challenging time in my life. Pete’s story figured prominently, and quite frankly, it’s hard to put into words the impact that Pete has had on my life. Apart from sharing the bond of being BC alums, my connection to him runs much deeper. Every time I wanted to make excuses for myself, complain about my situation, or feel jealous at my classmates’ boundless energy, I thought back to Pete, and his attitude in battling ALS. I don’t equate my condition with his for one second, but I used him as a role model for how I should respond to the day-to-day challenges in my life. I still do.

As I followed his journey in the subsequent months and years, and saw him adapt to the relentless progression of ALS, I noted his reaction to each new milestone and how he took it all in stride. Even today, he still takes it in stride, finding joy in the small things in life, including his family and his daughter Lucy.

Last May, I graduated from the Boston College MBA program, a triumph of sheer will and determination. It was also a testament to all those who helped me – my friends, family and the complete strangers whose stories I used as inspiration in my darkest moments. If I could have given a speech at graduation, Pete Frates would be one of the people that I would have thanked. 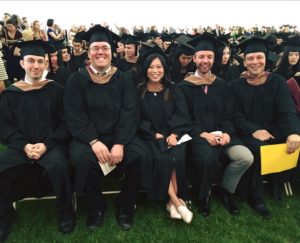 A couple weeks ago, his family went public with the news that they were struggling with the costs of Pete’s care, making an appeal to the general public for support. They estimated they spent $3,000 per day on care, which comes out to around $90,000 per month and over a million dollars a year. Even for someone like me, who is active with MDA and knowledgeable about ALS, that figure still came as a major shock.

If you are a family member of someone with ALS or another disease that requires around-the-clock care, you are probably nodding your head, already familiar with the astronomical costs involved with caring for your loved ones. This cost may not even account for lost wages or the countless hours spent caring and worrying.

For the general public, the Frates’ disclosure was a wake-up call to the financial toll of ALS. I saw comments from people who thought that some of the money raised from the Ice Bucket Challenge went to help Pete; others said they had only considered the physical impact of the disease but not the emotional and financial aspects.

For three years, Pete has been a guiding light for me on my path to acceptance, an internal tug of war that continues to this day. Boston College’s motto is “Ever to Excel.” It applies to Pete in the way he lives his life, and it applies to all MDA family members and patients in how we face what life throws at us to the best of our abilities. We may face pain in our muscles, our wallets and our heartstrings, but in doing the best we can day after day, with what we have, we excel in our own way.