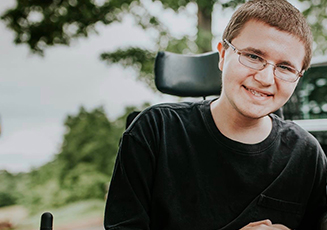 Raymond (Ray) Walter, who has Duchenne muscular dystrophy, graduated college with degrees in physics, mathematics and economics at age 18. He is currently continuing his doctoral studies in mathematics and physics at the University of Arkansas, where he is a Distinguished Doctoral Fellow and National Science Foundation Graduate Research Fellow. Raymond has also recently been awarded the prestigious U.S. Department of Energy Office of Science Graduate Student Research (SCGSR) Award.

Ray Walter is not your typical graduate student.

Having graduated high school by age 14 and graduated college by age 18, Ray, now 22, is currently working on two graduate degrees at the University of Arkansas.

While Ray has passions for poetry, music and literature, he gravitated toward math and science at a young age. In third grade, when Ray’s dad realized Ray was beyond his math class level, his father started giving him math workbooks for fun. The rest, as they say, is history.

During his explorations in academia, Ray has genuinely enjoyed his studies and become grateful for the academic community of which he is a part.

“In my academic departments [math, physics, economics], I was recognized and respected for what I was doing,” he says. “My research awards were for the research projects I proposed and my past showing that I could keep my promises — that was the case for my National Science Foundation (NSF) award, and it is the case for my Department of Energy (DOE) award. When I crossed the stage to accept my undergraduate diploma and several hundred faculty stood in applause — and thousands of others cheered — I realized that I was part of something greater than myself.”

Ray’s academic career continues to have no boundaries: He recently accepted the highly prestigious SCGSR Award. This award consists of an appointment to a three- to 12-month research project full-time at a DOE National Lab as part of dissertation research.

For Ray, this means he will be working with Dr. Lin-Wang at Berkeley Lab in Berkeley, Calif., where he will be working on some of the world’s most powerful computers to design novel memory devices, low-voltage processors, ultrafast random-access memories (RAM is basically the ‘short-term memory’ of a computer) and new low-voltage processors (which will allow more power to be packed into the computers we use everyday). He will focus on complex nanocomposite structures made of ferroelectric materials, on the scale of just a few thousand atoms. Ferroelectric materials appear in many applications (audio devices, solar cells, capacitors, and so on), though the most familiar application is the RAM in the PlayStation II.

Ray says DMD doesn’t keep him from doing this work.

“Some people would like to know more about the logistics and working with the DOE on disability access,” shares Ray. “All I’ll say is that the DOE has been extremely accommodating: Their job is to do science, and they will accommodate disabilities so they can focus on science. The disabled scientist is first and foremost a scientist.”

After his graduate work, Ray plans to stay in the sciences, potentially working in science in industry or in government labs. Whatever he ends up doing, Ray is positive he will continue to live unlimited through his personal and academic contributions.

“I’m getting busy living instead of getting busy dying. I am doing all that I can in the time that I have, despite the severe limitations to that,” Ray says. “I have followed those of my passions for which I have the most talent, and this has led me to achieve more than most in their lifetimes. I have shared my story with the world to give others inspiration, and they inspire me through their support.

Sign up to learn more about how you can help kids and adults like Ray live longer and grow stronger.