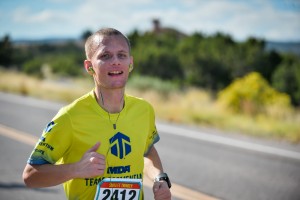 Andrew Hussey runs to work and he runs home from work. He pounds the pavement on the weekends. He runs upwards of 80 miles a week — more than 600 miles since January — training for the multiple races he’ll run this year.

But he doesn’t run all those miles for himself. He runs for his younger brother, Brandon, who has a form of muscular dystrophy called mitochondrial myopathy.

Brandon, who Hussey describes as the life of the party, is the runner’s inspiration. Running is also how Hussey lives unlimited.

“He keeps me running because I know he can’t do that,” Hussey says. “I do something that he can’t do, so that maybe one day people like him can run.”

Hussey is part of Team Momentum, a group of endurance runners who use their training and racing to raise funds for the MDA.

Since his first marathon at 20 years old, Hussey says running long distances has become his passion.

“It was hard,” he said of his first marathon. “But I felt awesome, because I had achieved something that one percent of one percent complete in the world.”

Living unlimited is about refusing to believe in the word “can’t” and consistently pushing to go above limits. Even though he struggled in his first race, Hussey was already well on his way to exemplifying the live unlimited spirit.

Hussey ran 15 races last year, fundraising for MDA and other causes. He plans to run four races in the coming months to fundraise for MDA. He’s also a camp counselor at the MDA Summer Camp at the Manzano Mountain Retreat in New Mexico. This will be his eighth year working at the camp.

“It makes me feel good to know that I’m raising money for something that can help these kids,” he says. “They get to go to summer camp — and some kids say it’s better than Christmas — but it’s just, more than that maybe one day they won’t have to be in that wheelchair or use that ventilator.”

Hussey got some surprise help in reaching that goal in March from his local news station, KOB 4, and their Pay It 4ward campaign. A reporter and camera crew arrived unannounced at the restaurant where Hussey works, bringing along his brother and a good family friend who had nominated him for the award. They gave him $400 on the spot, handing it to him across the counter and capturing all of it on camera.

“They surprised me,” Hussey says, laughing.

Now, people approach him to say that they saw him on the news and Hussey has even gotten more donations, thanks to the coverage. He hopes that the report raised more awareness of muscle disease and MDA.

But Hussey is not about to rest on his laurels. He’s got races coming up and is already thinking about plans for 2017, which might include his own race in Albuquerque to benefit the MDA.

“I love running,” Hussey says. “Everybody know that’s what I do. It’s my life now.” It’s also how he lives unlimited.

Learn more about Team Momentum and races near you