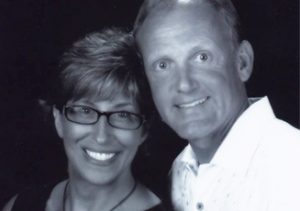 Not in the traditional way — I met Denise via eHarmony. Yes, we were an eHarmony success story. We often joked about the eHarmony commercials with the two incredibly good-looking people dancing in a beautiful garden or around a fountain. We thought how cool it would be for us to be featured in a commercial dancing around with our wheelchair.

Not sure why we never got that call. One of the world’s unsolved mysteries.

Denise was unlike anyone I’d ever met. She was beautiful, smart and had a soul that was unmatched. When I met her, I was in a very dark place. She was the light that got me through the dark place. She would talk to me for hours, either face to face, on a long walk through a forest preserve or on the phone. She never cast judgment and built me up. I knew this woman was living life as God intended and always put others ahead of herself. I’d never experienced that before. She always put her faith first and figured everything would fall into place.

About six months after we got married, on Dec. 9, 2010, this faith was tested in a way we never could have imagined. In a dimly lit doctor’s office these words were spoken: “You have ALS. There is no cure and no known treatment plan. It is a fatal disease. Life expectancy is two to five years after diagnosis. I’m sorry.”

At this point a choice had to be made: Make the best of a terrible situation or wallow in self-pity. Choose to die with ALS or live with ALS and be all in. Because of Denise’s incredible faith, she chose to live with ALS, and that is where this story really begins.

When I met Denise, she was in the best shape of her life. She exercised every morning and had just taken up running. I was 20 states into the 50 States Marathon Club. Denise and I began running together and even did several 5Ks together. I promised her on our wedding day, June 18, 2010, to run a marathon anywhere with her provided she put in the training. I told her 5Ks were “cute” but nothing compared to the rush of finishing a marathon. So that was the plan. 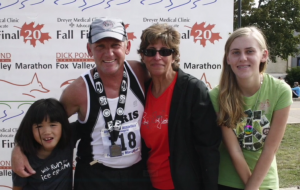 As we trained, some of the problems she was having were magnified and we had to stop. Then we got the diagnosis and things changed — in some ways, interestingly enough, for the better. Running is great, but running for a cause was hands-down better than I ever could have imagined.

I had to keep the promise I made on our wedding day and was looking for a way to keep it. At that time, I contacted the Les Turner Foundation, a nonprofit serving ALS patients in the Chicagoland area, and was put in touch with Kim McGyver, who helped Denise and I decide on our first marathon together. It was in New Jersey along the shore where Denise spent so much time growing up. Les Turner purchased our first racing chair for the event.

I was so blessed to be able to push Denise in eight marathons after that, including Boston in 2014 and 2016. Because of Denise’s faith, we were able to do something together that could be called nothing else but a miracle given our situation.

I often wonder how Denise could stay so positive and be in the fight of her life for five-plus years. I don’t think I could have done it. 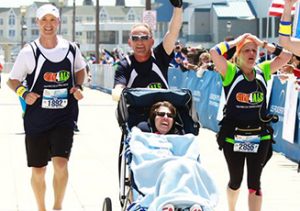 The answer to this question escaped me for quite awhile, at least until Denise and I were watching the movie “Miracles from Heaven,” a fantastic movie about faith and trust in God. My answer came by way of an Albert Einstein quote used in the movie: “There are two ways to live your life — as though nothing is a miracle or as though everything is a miracle.”

Imagine how all our lives would be changed if we all chose to live life like everything is a miracle. If Denise could do it facing everything she was forced to face, I think all of us can do the same.

This is how Denise would want it.

I was so blessed to find Denise and make her my wife. If I could marry Denise tomorrow knowing full-well ALS would rear its ugly head, without hesitation, I would marry her again. That’s how I roll.

God truly smiled down on me that day in the fall of 2009 when I met a girl. Although I miss her terribly, I always try to remember her spirit, her infectious smile and her sense of humor. All I have are memories and her pictures in a frame. I know God has her in his arms. I will always have her in my heart.

Chris is still determined to run in honor of his beloved wife and will be at the start line at the BOA Chicago Marathon on Oct. 9 – pushing Denise’s pushchair filled with cherished memories of her life.