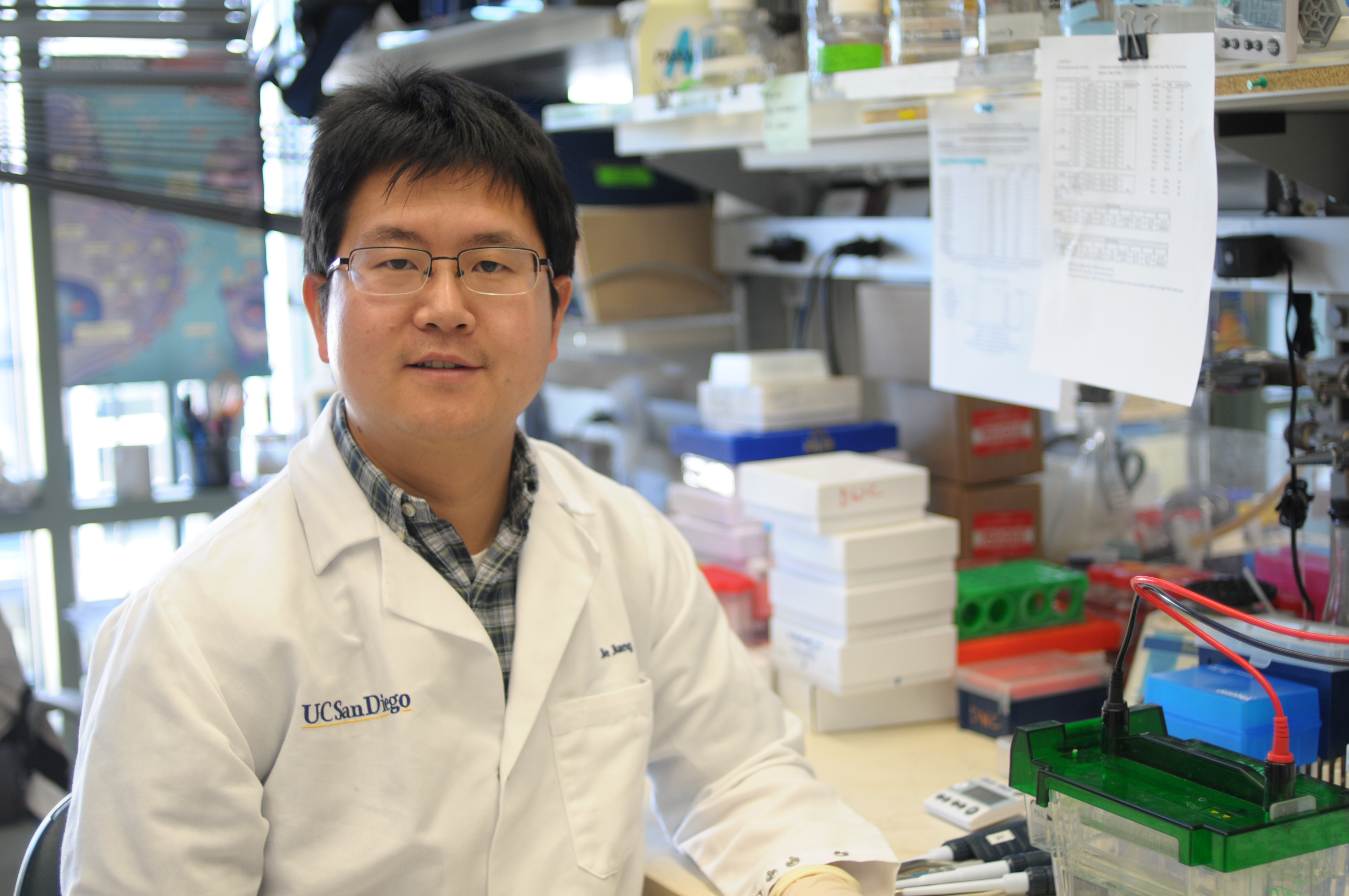 Expanded repeated sections of DNA (GGGGCC hexanucleotide repeats) in a non-coding region of the C9ORF72 gene have been identified as the most common genetic cause of ALS. It’s uncertain, however, if the disease is caused by reduced levels of normal C9ORF72 protein and/or by toxic RNA and proteins manufactured using instructions encoded in the extra DNA. (RNA is the chemical step between DNA and protein manufacturing.)

Jiang and colleagues will work to determine whether the loss of normal C9ORF72 protein synergizes with toxic RNA and proteins to exacerbate disease in research mouse models.

Expanded GGGGCC hexanucleotide repeats in a non-coding region of the C9ORF72 gene were recently identified as the most common genetic cause of ALS and frontotemporal dementia (FTD), another neurological disease characterized by behavioral and language changes. The proposed pathogenic (disease-causing) mechanisms include the reduction in endogenous (normal) C9ORF72 protein function and/or a toxic gain of function (toxicity) from the repeat-containing RNAs.

Previous studies have determined that C9ORF72 repeat expansions contribute to ALS/FTD disease pathogenesis in part by a gain of toxicity mechanism, and that reduced expression of C9ORF72 in mice alone is insufficient to evoke ALS/FTD. However, it has been suggested that loss of C9ORF72 alters microglial (the immune cells in the central nervous system) function, and may contribute to neurodegeneration in C9ORF72 expansion carriers.

My current work aims to determine whether C9ORF72 loss of function will synergize with gain of toxicity to exacerbate disease using genetically modified mouse models, and to understand the role of C9ORF72 in microglia and its contributions to ALS/FTD. The outcome(s) will guide the direction of therapeutic development for ALS/FTD caused by C9ORF72 repeat expansions.

What is your focus in the field of ALS research and why is it important?

My research focuses on understanding the disease mechanism(s) caused by the GGGGCC hexanucleotide repeat in C9ORF72, and developing therapeutic strategies.

Hexanucleotide expansion in C9ORF72 is the most common cause of inherited ALS, and it also accounts for a substantial portion of sporadic ALS. Understanding disease mechanism and its implications for therapy development will bring hope to people with ALS caused by this mutation.

What is expected to come of this research? What will we learn, or what will be accomplished?

This research will determine whether C9ORF72 loss of function will synergize with gain of toxicity to exacerbate disease in genetically modified mouse models, and will shed light on the role of C9ORF72 in microglia and its contributions to ALS/FTD.

How will your research lead to treatments and cures?

Several lines of evidence support a toxicity of repeat-containing C9ORF72 RNAs, and my previous work has identified antisense oligonucleotides that catalyze degradation of repeat-containing RNAs as a potential therapy. (An antisense oligonucleotide is a strand of modified DNA that binds to and blocks RNA.) My current work will determine the degree to which reduction in C9ORF72 function contributes to disease pathogenesis, which will guide therapy optimization. Moreover, a role of C9ORF72 in microglia has been implicated, but not established. Understanding molecular mechanism(s) leading to microglial abnormalities from C9ORF72 loss of function may provide new therapeutic directions.

I believe antisense oligonucleotide therapy targeting repeat-containing C9ORF72 RNAs holds a great promise for patients affected by this mutation. Identifying the contribution of C9ORF72 loss of function to ALS in this research will further help optimize this therapeutic strategy.

Yes. Hexanucleotide repeat expansion in C9ORF72 is also the most common genetic cause for frontotemporal dementia (FTD), another neurological disease characterized by behavioral and language changes.

To learn more about how you can #EndALSwithMDA, visit mda.org.