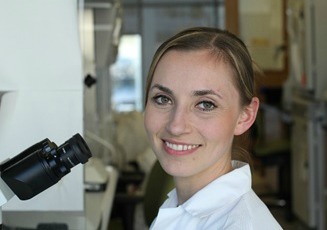 Kim Staats, a postdoctoral researcher at the University of Southern California in Los Angeles, was awarded an MDA development grant totaling $180,000 over a period of three years to study potential causes for sporadic amyotrophic lateral sclerosis (ALS). Using a cutting-edge approach to identify genetic contributors in sporadic ALS, Staats has found a new gene called SEC14L5 with ties to C9ORF72, the most common cause of familial ALS. Now she will elucidate the role of an identified SEC14L5 mutation in motor neuron death in ALS, increasing understanding of ALS disease mechanisms and facilitating the development of therapeutic strategies.

ALS is a devastating fatal disease driven by the death of motor neurons. Understanding the causes of ALS is necessary for developing therapeutic strategies. We are focusing on the potential causes of sporadic ALS for which the Ichida lab has developed a method to find mutations. These mutations are studied in-depth in induced motor neurons (iMNs), which are generated from blood or fibroblast cells from patients.

Here, we focus on an identified mutation in a gene, whose function is closely related to that of the largest genetic contributor of ALS. This research will provide a unique analysis of the identified mutation and its role in human motor neuron death in ALS, which will increase the understanding of ALS disease mechanisms and facilitate the development of therapeutic strategies.

What inspired you to study ALS?

Growing up I was introduced to ALS, as the disease ran in my neighbor’s family. As I began to understand the relentlessness and devastating character of the disease, I decided to study neurosciences to attempt to create further understanding about the disease pathology, mechanisms and causes in hope that others can build on this knowledge to develop an effective therapy for patients.

What is your area of focus within the ALS field and why is it important?

Our work focuses on the mechanisms that take place during motor neuron loss. In particular, it includes identifying ALS mutations and understanding how these mutations specifically lead to ALS.

Only with increased understanding of causal mechanisms in ALS, can the field develop therapeutic strategies that target such causes of ALS. Identifying causal mutations in ALS, including sporadic ALS, will hopefully lead to focused efforts to effectively treat ALS.

Why is it important that MDA continue to fund research in ALS?

Despite the fact that the first ALS mutations have been known for more than two decades, there still is not an effective treatment available for patients. I believe that emerging technologies will continue to increase our understanding of the disease and lead the research field towards a cure. Funding is essential to facilitate such advances in research. In addition, advances in ALS research may be useful in understanding disease mechanisms in other neurodegenerative diseases too.

Knowing the causes of the disease will allow for focused efforts to develop treatments. In addition, identifying ALS mutations will facilitate the development of both gene-therapy and personalized medicine applications. I am very excited about what these approaches will yield for patients in the future.

Multiple disease mechanisms observed in ALS are also observed in other neurodegenerative diseases, so understanding of these mechanisms may lead to the development of treatment for other diseases too. This may pertain to, for example, frontal temporal dementia (FTD), Alzheimer’s disease and Parkinson’s disease.