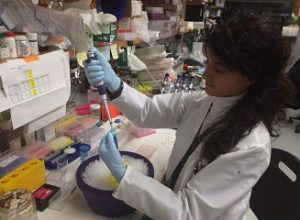 alia Rodríguez Muela, a postdoctoral fellow at Harvard University in Cambridge, Mass., was awarded an MDA development grant totaling $179,985 over a period of three years to deepen our understanding of what goes wrong in spinal muscular atrophy (SMA), a progressive disease caused by low levels of SMN protein. The work will focus on how the SMN protein is degraded in the cell in SMA. If the degradation pathway can be blocked, it could point to a potentially new, exciting approach to treat SMA.

SMA is caused by mutations or the complete deletion of the survival motor neuron (SMN) gene that leads to the deficiency of SMN protein. SMA is primarily characterized by degeneration of lower motor neurons of the spinal cord and atrophy of skeletal muscle.

Autophagy is an intracellular degradative pathway that plays a critical role in the removal of cell components to maintain cellular homeostasis. The involvement of this cellular process in major neuromuscular disorders is extensively reported, but its participation in the physiopathology (disease processes) of SMA remains largely unknown.

The long-term objective of our work is to investigate what the role that autophagy plays in controlling SMN protein levels.

Investigating how autophagy controls SMN protein levels will not only allow us to better understand the physiopathology of the disease, but will also help us find new targets that, used in combination with other approaches acting via alternative mechanisms, may lead to greater therapeutic benefits for SMA patients.

What inspired you to study spinal muscular atrophy?

My entire career I have been interested in neuromuscular disorders. About five years ago, I participated in a neurodegeneration conference where I was first exposed to spinal muscular atrophy. Such a devastating disease affecting children really touched me and made me decide to invest my efforts in trying to find something that could somehow help them.

What is your area of focus within the SMA disease field?

I want to contribute to better characterize the functional changes associated with the disease, which requires carrying out basic science. However, my ultimate goal and main focus is the clinical aspect: to try to find new potential therapeutics to treat the disease.

Why is your area of focus important?

It is universally accepted that increasing the amount of SMN protein is the best therapeutic approach to treat SMA patients. There are several avenues to achieve it, and one of them is by preventing SMN degradation. The autophagy/lysosomal system is one of the two main degradative systems in the cell and almost nothing is known about how it controls SMN protein levels.

Why is it important that MDA continue to fund SMA research?

There is no treatment for SMA. … Furthermore, there are many knowledge gaps regarding SMN functions and SMA pathophysiology in general. Therefore, much more research needs to be performed in this field.

Our group and others have demonstrated that increasing SMN also rescues amyotrophic lateral sclerosis (ALS) motor neuron death. Also, we discovered that SMN controls the correct proliferation and differentiation of muscle stem cells. So, yes, this work by helping us to understand how SMN levels are regulated by autophagy, will provide knowledge that could be applied to multiple neuromuscular diseases.

To learn more about how MDA research is accelerating treatments and cures for SMA, please visit mda.org.