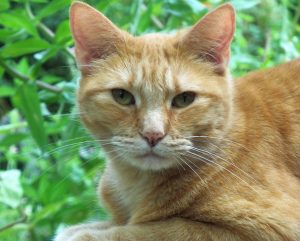 The reality of losing the ability to speak recognizably like yourself, especially when combined with losing the ability to move your arms, has more repercussions than just affecting the way you interact with your family and friends. It affects your relationship with the furry members of your family, your pets, as well. Dogs and cats react to touch and the sound of your voice. If you can’t pet them and they don’t recognize your garbled voice and they sure as heck don’t recognize their name being said by your garbled voice, you begin to become invisible to them.

The first time I realized this was happening, many years ago, was heartbreaking. Our pets have always been true members of our family. They add interest and comfort to our lives and offer us loving companionship. To be without that comfort and to be going through what I was going through was difficult, but I thought there was nothing I could do. And to complicate my dilemma even more, I had never had a normal relationship with these later pets, because they had all arrived after I had ALS.

Then along came Tiger. I think our son, Daniel, was around eight when he and his friend found a litter of kittens in his friend’s open basement. That would have been around 13 years ago. They brought the kittens across the street to our house and we took them in. The first thing my husband, Curry, did was place the entire litter on my lap in the wheelchair. Those warm, squirming bodies felt wonderful! One of those little kittens was an orange tabby that we named Tiger. She would not forget this earliest memory in our house. With the exception of one kitten that we gave away, she outlived all of her siblings. She also outlived all of her children in the one litter she had before she was fixed. Tiger was a survivor.

I can’t remember exactly when it began, but I know that Tiger was an adult cat. One day, out of the blue, she jumped up on my lap. She kneaded it to her liking and settled herself in. I was shocked! For some reason, she had suddenly recalled her first kitten memory in our house. This was not a fluke. She started doing it, maybe not every day, but regularly, and she was definitely my daily companion in the winter. I strongly suspect she wanted to share my warm blanket and space heater! Sometimes Tiger would sit on my lap and look into my face, as if she were trying to figure out what was going on with me. For years I had been without the companionship of our pets and, in the blink of an eye, I had this warm, friendly cat on my lap who actually SAW me. I was truly blessed. 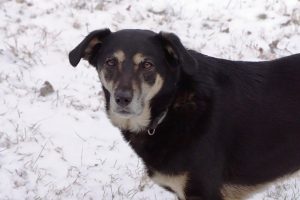 Tiger was the best cat we had ever had. We were continually amazed at her intelligence and prowess. When Curry reprimanded one of the other two cats (Mouse, PK), she paid attention and ran over to give them a smack! Tiger was the boss. If anyone, family member or guest, was talking too loudly, they got a nip on the nearest limb she could reach. She was the mistress of the garden and the garden bench. We always joked that she let us share the garden with her. I told Curry that when she left this world I wanted her to be buried under the bench within my mother’s King’s Wort.

Tiger was an excellent climber and hunter, which did not make me happy. Fortunately, she usually brought her critters in the house through the dog door, where we could rescue them most of the time. We always knew she had a critter by the bizarrely resonant sound she made in her throat. It was funny to hear her make that same sound when she “captured” a sock on the floor in the house! Tiger was one of a kind and I was blessed to have her companionship for many years.

Sadly, on May 16, 2015, she followed Daniel and his friends on a late-night walk around the neighborhood. It wasn’t until they were away from the house that he even noticed that she was tailing them. He tried to be aware of her from then on. They turned onto another street and not long after that a dog started barking. Tiger took off. He continued, thinking she would eventually follow from wherever she had hidden herself. It was so late when they returned, Daniel didn’t think of waking his Dad to tell him about Tiger, so it was well into the morning before Curry went looking for her. He didn’t find her, but hours had been lost and she could have gone in any direction in her confusion and being unfamiliar with that part of the neighborhood.

We did everything that could be done… Put up posters, filed and re-filed lost pet reports, posted at area vets, monitored daily online area lost and found pet sites and posted on those same sites to ask people to keep looking. We did that for well over a year. That was all I was doing and I had to make a choice. I call myself an artist and a writer, and yet I hadn’t written a single word or drawn a single line since Tiger went missing. This could not go on. I decided to continue filing the lost pet reports and updating the Craigslist post. I was going to face reality and get back to work… Of course, all of that went to hell in a hand basket when Curry had his accident. (If you don’t know about that, you might want to read my last blog, “What Happens When the Caregiver Needs Care?”) 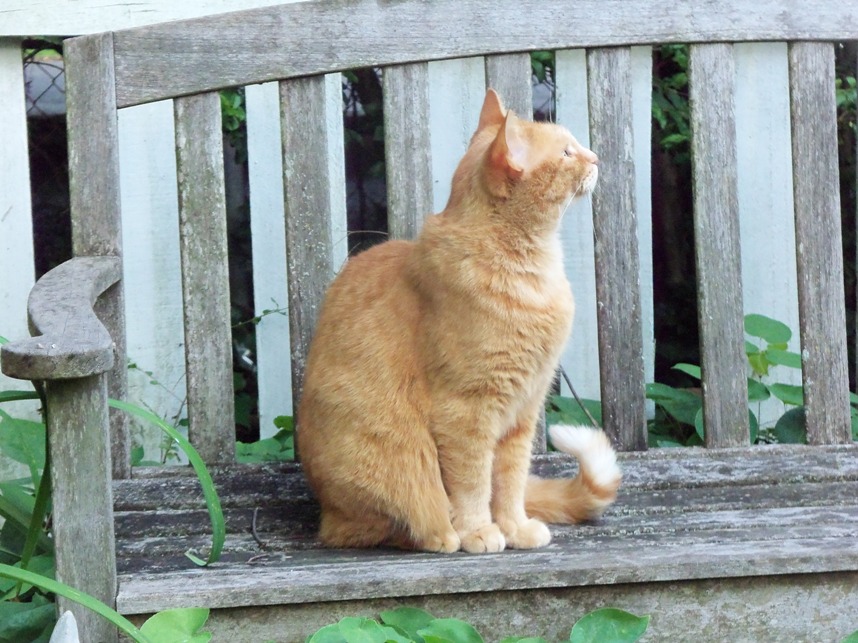 Tiger, I don’t know if we’ll ever see you in this life again, but I pray you are at peace. For all we know, you met your end that night and someone either didn’t see our posters or they were too afraid to tell us it had happened in their yard. But Tiger was a survivor. She would have tried to find her way home and she could have gotten lost and someone could have taken her in. If that was the case, I hope she is safe and loved. If she did cross the Rainbow Bridge, I pray it was quick and painless. You will always live in our hearts, Tiger.

Needless to say, I was pretty devastated after Tiger left. I missed her company. Though they could never replace Tiger, we tried putting Mouse and PK on my lap at different times, but they would just jump down. I wanted a relationship with all of our pets. One day I was looking at Lizzie the dog. It amused me to wink at her and make faces at her. I wanted her to know I was there! She would stare at me solemnly and then laid her head back down on the floor and closed her eyes. Well, at least she looked.

The idea was growing in my mind that I wanted to pet Lizzie and I finally asked Curry to help me. He took my hand and rubbed it all over her face, ears, back and ended with some smacks on her rump around her tail. Lizzie loved it! I don’t know if she was taking in from the scent that it was my hand stroking her, but it was enough for me to physically connect with her. I tried to talk to her while Curry moved my hand. I told her I loved her. That was the very first time I had ever pet Lizzie. It became a daily ritual. When she saw Curry taking me back to the bedroom to go to bed, she would follow. At the appropriate time she seriously took her place beside my wheelchair and the petting commenced. She went away wagging her tail and I went to bed smiling. That’s how Lizzie became Lizzie Worsham, Service Dog.

Lizzie still didn’t pay me much mind, but I noticed her paying more attention to my voice. She mistakenly thought she could get up on the futon because only I could see her. She was wrong! The minute she laid down, I started in with my, “No-no-no,… No-no-no,… No-no-no!” That surprised her and she got down. Curry came in to see why I was fussing and scolded Lizzie for being on the futon. She didn’t even try it after that. I would just give her THE LOOK.

We have a real problem with squirrels getting on our birdfeeders. To counter this, Curry trained Lizzie to run out the dog door and scare the squirrels off the feeders and up the tree. The cue to do this was saying the word “squirrel” to Lizzie. It was always highly entertaining to watch the acrobatics of the squirrels to elude Lizzie and get up that tree. It wasn’t usually much of a contest, because our squirrels are attuned to the sound of that dog door and would be halfway up the tree by the time Lizzie got down in the yard. 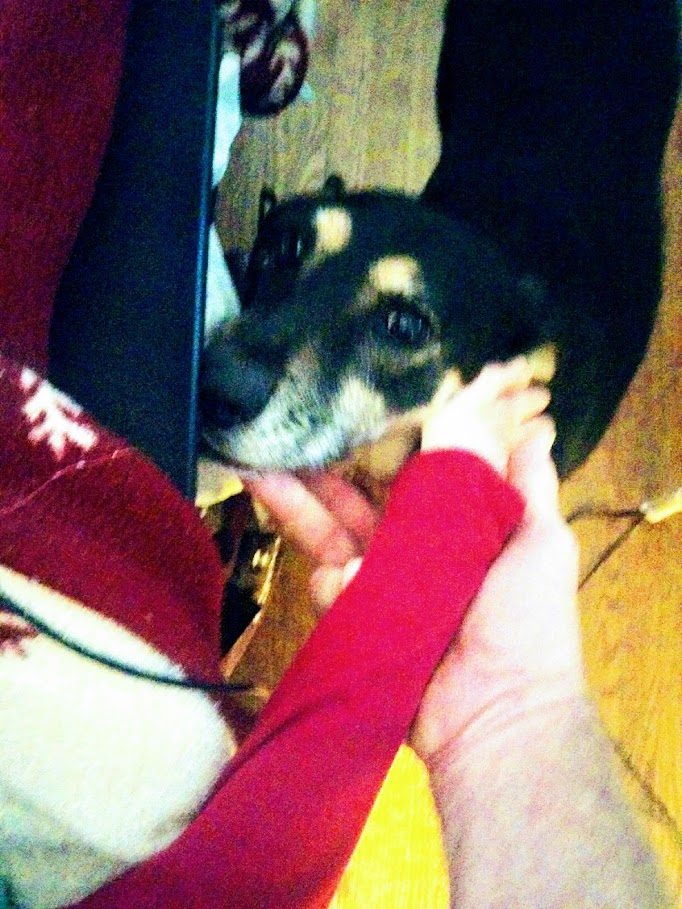 One day I was watching first one, then two and maybe even three squirrels get on the birdfeeders. This really bothered me, because we only put out a daily ration of birdseed for the birds. If the squirrels eat it, the birds will have nothing. So I started hollering! I wanted Curry to tell Lizzie to get them off, but for some reason he was not understanding me and did not see the squirrels outside the sunroom windows. I thought if I started calling Lizzie, he would understand. I called her several times. Now, I know she didn’t recognize her name, but she heard the noise and got up off her dog bed in the corner. She looked at me and I looked outside. Then I said something that sounded kind of like “skirl.” Lizzie turned and headed out the dog door and the squirrels ran for the tree! We were stunned! Curry said, “Did you just tell Lizzie to get the squirrels?” … By golly, I guess I did! Lizzie girl, you made my day…

This has happened several more times. Truth be told, I don’t think I have to even try to say squirrel. She hears me calling and sees me looking outside. She gets the message and carries out the request. Our Lizzie is very smart.

Who knows? Maybe one day we’ll add a kitten to our family and raise her, as much as she will cooperate, on my lap. Then maybe she will choose to be on my lap now and then when she grows up. A little orange tabby, I think. Orange was my mother’s favorite color, and you may recall that I once had a very dear friend who was an orange tabby… Tiger would like that.

Don’t give up on your pets, though it may feel like they’ve given up on you. Think of imaginative ways to interact with your pets, even if you just ask someone to help you pet them occasionally. Show them that you’re still you and you still love them, because you know, deep down, they never stopped loving you.

Help fund research for treatments and cures for ALS and all neuromuscular diseases.

Simply Stated: What Is Neuromuscular Disease?