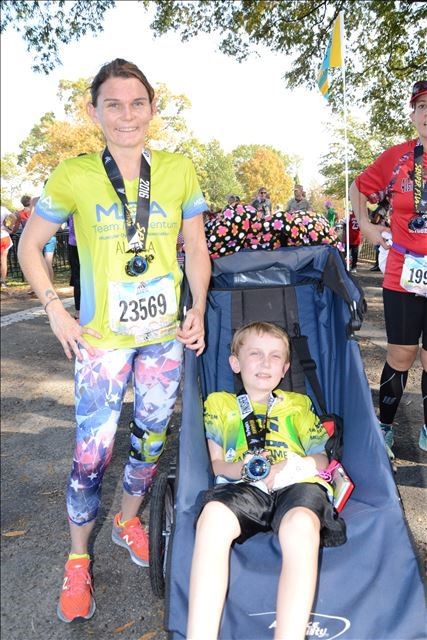 Endurance races had never been on Alicia Miro’s radar. Aside from playing basketball in high school, Alicia had little experience running, due in part to back issues and exercise-induced asthma.

But one day, her son Mason picked up an issue of MDA’s Quest Magazine and flipped open to an article about MDA’s endurance running program, Team Momentum. Upon seeing the article, Mason, who lives with congenital fiber type disproportion (CFTD), asked his mom if they could run a half marathon.

This was the start of Mason’s Movers, a team created by Alicia in honor of Mason.

“Our first race with Team Momentum was the Boston Half Marathon in 2014. We couldn’t participate with the team during weekly training runs since we live in Rhode Island, but we still received a ton of support during our own training runs as well as at the race. When we approached the end of the race, Mason got out of his push chair and we walked across the finish line together,” says Alicia.

Mason and Alicia participated in a few half marathons with Team Momentum before tackling their first full marathon: the Marine Corps Marathon in Washington D.C. The duo didn’t know what to expect, but in usual fashion, they were welcomed with open arms from both their teammates and runners they had never met before.

“It was an extremely hot day and strangers on the course were approaching me during the race and offering to help push Mason’s chair,” shares Alicia. 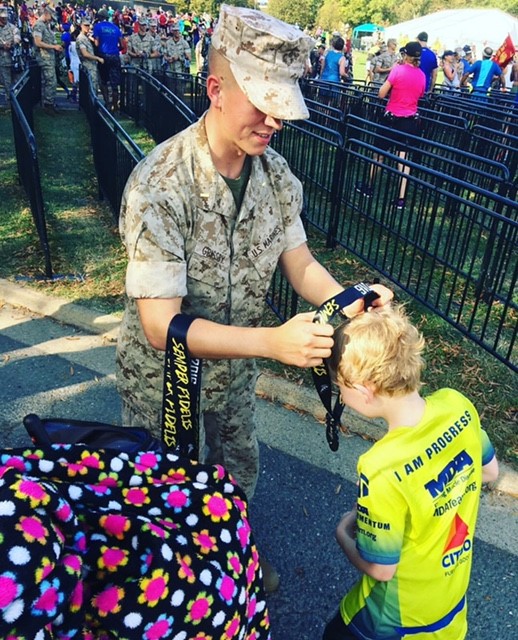 Though Alicia tore her hamstring and walked the last two miles, she and Mason once again crossed the finish line, together.

“The marines in the crowd were cheering for us at the finish line. It was an amazing feeling to have conquered 26.2 miles with Mason. It was truly a life changing experience,” says Alicia.

When discussing her favorite aspect of Team Momentum, Alicia found it difficult to come up with only one answer.

Over the last few years and several races, Alicia admits that Team Momentum has grown to feel more like family than just strangers united by a common bond. She is also grateful to be able to show her son what can be accomplished through perseverance and persistence.

“Mason knows that no matter how challenging something might be, it can always be accomplished together. Mason has all of his medals hanging up in his room and has taken them in to school to show his classmates. He’s so proud of what we’ve done,” says Alicia. 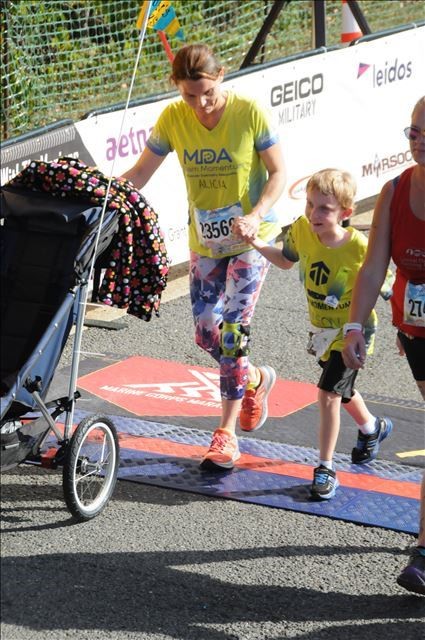 As a former non-runner herself, Alicia knows the choice to run a marathon does not come easily, but advises the best thing to do is “just go for it!”

“Mason and I took a leap of faith for our first half marathon and now we love it. The support you get from Team Momentum is top notch, the coaches are amazing and the running community is incredible and supportive. Although we can’t attend the training runs in Boston, we still play a huge part in the team,” shares Alicia.

She also acknowledges that fundraising can be intimidating but they have received an extraordinary amount of support from Team Momentum; Mason’s Movers’ was able to raise more than $12,000 with the support of friends, family and their local community.