Could genetic modifiers (genes that minimize or exacerbate symptoms) explain why some people who have disease-causing genes for facioscapulohumeral muscular dystrophy (FSHD) seem to be “resistant” to the disease? Could the drug dimethyl fumarate, or DMF, already approved by the U.S. Food and Drug Administration (FDA), be rapidly developed to treat mitochondrial disease? Could a modified antisense therapy be effective as a treatment for spinal-bulbar muscular atrophy (SBMA)?

Neuromuscular disease researchers are looking for answers to these and other questions as they work to find treatments — and MDA is providing support to help ensure their success.

In August, 13 new MDA research and development grants with a total funding commitment of $3.5 million began supporting research projects around the world aimed at answering questions, finding solutions and making breakthroughs that will lead to treatments and cures. The new projects are targeted to make an impact that can be felt across the diseases in our program.

In addition, with these new projects we continue to build on recent successes. Over the last two years, four drugs that can trace their origins to MDA research grants just like the ones we’re announcing today have received FDA approval. In 2015, the FDA approved Keveyis for the treatment of periodic paralysis. In 2016, the agency approved Exondys 51 for the treatment of some forms of DMD, and Spinraza was approved to treat individuals with spinal muscular atrophy (SMA). And in February 2017, the FDA approved Emflaza to treat DMD, regardless of the genetic mutation underlying the disease.

Making progress, like we have with these new drugs, is the reason we are so optimistic about this new round of funding — because we know that every new grant has the potential to catalyze the next medical or scientific advance for MDA families.

New grants are in addition to other 2017 awards 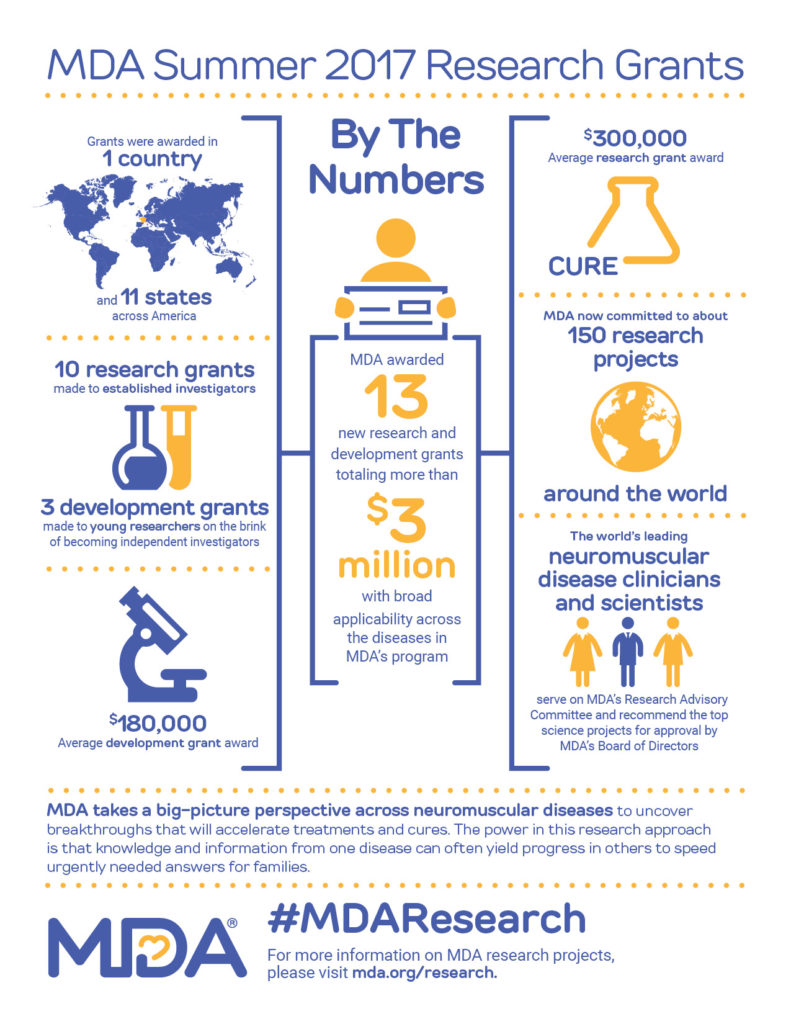 Making up MDA’s Summer 2017 grant cycle, the new awards are in addition to a number of others announced this year.

All of these grants have the potential to lead to breakthroughs that will improve the lives of the individuals and families we serve.

Impact is felt across diseases

As an organization that covers dozens of neuromuscular diseases, MDA is leveraging the power of a big-picture approach in our search to find treatments and cures, with most, if not all, the research projects we support having the potential to further knowledge that can make an impact across all the diseases in our program.

That’s why we continue to support the world’s best scientists who are working on the most promising, most innovative, most cutting-edge science out there. With research investments totaling more than $1 billion over the last six decades, MDA has fingerprints on many major advances in neuromuscular disease research, and with these latest awards we are continuing to fund the science that will lead to the next medical and scientific breakthroughs poised to change lives.

For more information on all the new grants, check out MDA’s Grants at a Glance.

Find out how you can fund cures and champion the cause at mda.org.