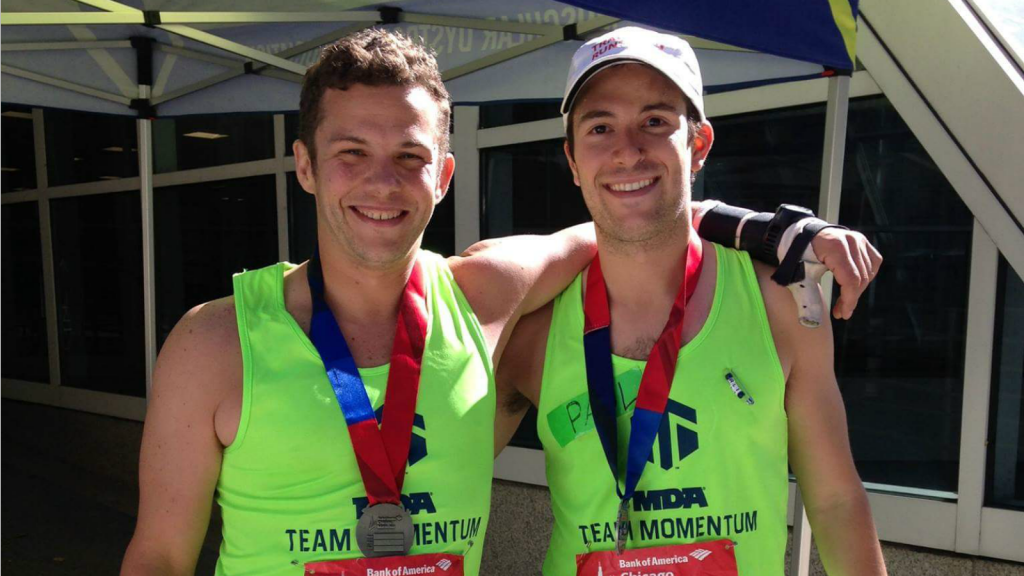 Brendan Chambers had just crossed the finish line at the 2013 Providence, Rhode Island marathon, when he spotted the Muscular Dystrophy Association’s tent. The two pretty girls manning the table had caught his eye, but it wasn’t only that.

His uncle, Luke, had just died from Lou Gehrig’s disease, or ALS.

Standing at the tent, Brendan realized that this was his chance to both run the Chicago Marathon, which he’d been itching to do for years, and to honor his uncle’s memory by giving back. “There was a flyer on ALS, too, right on the table,” he says. “So, I saw it as a sign — that, ‘Hey this is it.’ I signed up.”

Ever since, Brendan has been a part of Team Momentum, MDA’s endurance program that helps participants defy their limits by training for half-marathons and marathons, while also raising funds to help families with muscular dystrophy live unlimited. “You can raise money to do research for these diseases that no one brought upon themselves at all — people who need help,” he says. “And there are people on the other side willing to give money to help fund research and help come up with cures and treatments to help, and I think that’s a great thing.”

Brendan always admired his uncle. Though he was born in Lake Placid, New York, Luke never settled down. The man was a free spirit and always on the move, though his heart was forever with his beloved Yankees.

When Luke got sick, he was in the Midwest, far from his birth home. The quick progress of the disease was devastating. Diagnosed in May 2013, Luke died just four months later, shortly before his family had planned to fly him back to New York state.

Luke’s sister, Brendan’s stepmother, is now one of the runner’s biggest donors, and Brendan’s sister cheers him on from the sidelines with homemade signs. “The personal tie to this is a no-brainer,” Brendan says. “I don’t even think about registering through a lottery. I just register right through MDA. To me, it’s like, until my knee breaks or something, I’ll probably do one every year.”

This October’s Chicago Marathon will be Brendan’s third race with the team, but he’s been running marathons and half-marathons for years. It hasn’t always gone well. Brendan’s very first marathon went terribly. Instead of stopping him in his tracks, that bad race did something different. It motivated him.

“It was the worst time I had ever run,” he says. “At that point, I was like, ‘Never again. I’m never running a marathon again.’ The amount of pain I felt — never again. Then I realized that I came in last in my age group and that completely changed my mind. I was like, ‘Nope, not going out like that.'”

Brendan’s first marathon with Team Momentum went much better. Plus, waiting beyond the finish line was extra motivation. Reagan Imhoff, MDA’s former National Goodwill Ambassador, was there in her chair, handing out safety pins strung with beads that had her initials on them. Reagan handed Brendan her pin and he slipped it into the fabric of his well-loved baseball cap. It’s been there ever since.

“It’s a reminder of what is important in life,” he says.

Brendan is always striving to be better than he was yesterday. His body breaking down under the stress is the only limit he has — and he’d likely just find a way around that anyhow. “You feel like there’s potential to do better than you did before. Sometimes you put in the effort to reach that potential, sometimes you don’t. But, it’s almost like searching for the perfect race and I have yet to have that,” he says.

Brendan will keep running with Team Momentum, whether or not he runs it in the time he envisioned or feels like he could take on the world after the race. “It’s not about that, in the end,” he says. “It’s not about yourself. It’s about raising money for people who need it.”