What does a small bird have in common with an ALS diagnosis? Artist Erin Brady Worsham eloquently shares. 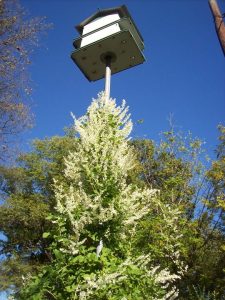 We are crazy about birds at our house. We have seven feeders scattered around our enclosed backyard and two feeders in the front yard. We have been blessed with a number of tall trees in our yard, as well as a head-high hedge that nicely insulates our backyard from the side street. There are cozy nesting places for the two dozen or so sparrows that seem to permanently live in our hedge. The other denizens of our feeders nest elsewhere but come to Chez Worsham daily to dine. So, all in all, the birds like our yard and we like the birds.

But every Garden of Eden must have its snake and ours was that we were also crazy about our two cats and a dog, Mouse, PK and Lizzie respectively. No matter how many bells you put on them, there are going to be instances when they catch a bird and, if not stopped, eat it. This is especially true in the spring when you’re dealing with baby birds learning to fly and falling out of nests. And, as much as we love our tall trees, they also offer cozy nesting places to our neighborhood red-shouldered hawks, who also like to eat birds. Unlike with the cats, once a bird disappears in an explosion of feathers, there is no rescuing it. We feel blessed to have our birds, considering the natural predators they face in our own yard!

We watched a little bird drama play out in the early summer. A feathered fledgling fell out of its nest before it could fly. Luckily, my husband, Curry, happened upon Mouse right after he “found” it. Gently removing the little bird from Mouse’s mouth, he put it safely in a cardboard box and placed it out of reach of our critters inside the house. We tried to feed it during the night with the water-softened cat food mashed with a little applesauce that the internet recommended, but it wasn’t the least bit interested. It was calmly, alertly, even stoically awaiting its fate. 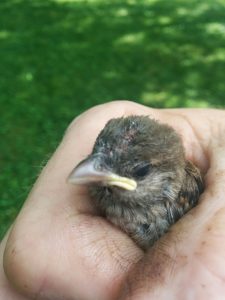 In the morning we looked at our options. Curry had already tested if the little bird could fly. Whether it could before the fall we did not know, but it could not fly now. That meant we needed to put it back in the nest if possible. Based on where Curry intercepted Mouse, we figured it had fallen either out of the Sparrow-Martin House or out of the interior nest near the top of the telephone pole. Yes, you read me right. We have a sparrow’s nest inside the telephone pole on the other side of the hedge. Well, Curry certainly wasn’t going to scale the telephone pole, so we had to take our chances with the Sparrow-Martin House. Even then, he would be risking life and limb!

Curry leaned the ladder against the unsteady house pole and climbed as high as he dared. From that position he could only reach one of the openings and he carefully placed the little bird inside. I was watching from the other side of the garden and saw the female sparrow return in a little while. She checked out the cubicle and seemed to have no problem with the little guy. Then her mate returned and all hell broke loose!

No sooner had he seen that little bird than he pushed it out of the cubicle and off of the house! It fell-flew to the ground in the garden behind the tall goldenrod and the male and female sparrow followed it down. The male left immediately, as if to say, “… and stay out!” The female lingered for half a minute before returning to the house. I was stunned by the horror I had just witnessed. I had always thought of sparrows as kind, companionable birds, but what I had just seen was naked aggression or, actually, the natural instinct of a male to have only his own offspring about. I told Curry where it had landed. He searched but could find no sign of it and left the garden. We figured it had hidden itself deep in the goldenrod.

Then an amazing thing happened. The female sparrow from the top of the telephone pole flew down and perched on the picket fence surrounding the garden. She looked quite concerned and began calling softly. A short time later, she was joined by the male and they both called. Then they returned to the top of the telephone pole. This was repeated many times before we went inside. I don’t know if they ever found their baby, but we never saw it again…

Long before now, you’ve probably been asking yourself why I am telling you this. I mean, this is supposed to be an ALS blog, isn’t it? Don’t you see? WE are that little bird, and the fall from the nest or the push from the house is our ALS diagnosis. We are free-falling into uncharted territory and don’t know how or when we will land. The real sparrow parents represent our family and friends, who love us so much, but can do nothing to change our situation.

Life, like nature, is not always fair. Bad things happen to beautiful people and animals. God doesn’t stop life from happening. He just makes sure we are not alone while we are going through it. And don’t ever think that long freefall is not a blessing! It gives us time to make amends, to heal our relationships with family, friends and, most importantly, God, and to put our lives in order. I pray for those people who are killed suddenly, whether through accident, foul play, natural disaster or terror. They have no time to make their peace with God. So until there is a cure or a viable treatment for ALS, we must be thankful for that long freefall.

During these years, I have come to the absolute certainty that this is not our final destination. Sure, it’s been part of my Catholic faith all my life, but it has gone from being words in the catechism to a true conviction in my heart. You know that passage in the Bible about eye has not seen and ear has not heard what God has ready for those who love Him? Those words are incredibly comforting to me and I love to imagine the verdant pastures and gardens of heaven…

I wouldn’t be at all surprised if that little bird weren’t already there.