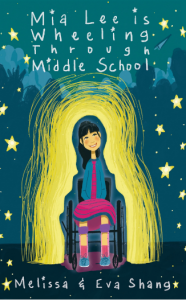 13-year-old Melissa Shang is an activist, an advocate and an author. She’s spoken at the United Nations, given a TedX talk and just published her first book. She is a girl on a mission.

And it all started with an American Girl doll named Isabelle.

For Melissa, Isabelle was the last straw.

Every year, American Girl unveils a new doll, called the Girl of the Year, which comes complete with her own story, usually one describing how the girl overcomes a challenge.

Melissa is an American Girl aficionado — she owns four of the dolls and devours the books and movies — and in 2014, she waited eagerly for the annual release of the Girl of the Year.

When she read the news, her heart sank. The girl of 2014 was a dancer, named Isabelle.

So, she complained to her big sister, Eva. Eva asked her a very important question, a question that would soon be heard around the world.

She asked, ‘What kind of doll would you like?’

So, instead of waiting, Melissa asked.

Shortly after, the sisters launched a petition asking American Girl to make a doll with a disability.

“For once, I don’t want to be invisible or a side character that the main American Girl has to help: I want other girls to know what it’s like to be me, through a disabled American Girl’s story,” Melissa said in the petition.

The girls had hoped for a couple thousand signatures. Instead, the petition would garner nearly 146,000 signatures and lots of press.

“I had seen petitions on Change.org go viral, but of course, at the time, I had no idea that it would reach as many people as it did and that people would be so moved by it,” Eva said. “Because back then we weren’t really looped into the broader disability community, so we didn’t know how many people this issue affected and how close to so many people’s hearts this issue was.”

Despite the outpouring of support, American Girl didn’t make any promises, though they did applaud Melissa’s efforts.

Melissa was facing a challenge, just like American Girls often do in the books that she loves. Would she give up? Or, like generations of American Girls, would she overcome it?

“It made me feel pretty sad, at first,” Melissa says of the doll company’s response. “But I realized that, well, we could make our own story about a girl with a disability.”

Together with her big sister, Melissa wrote Mia Lee is Wheeling Through Middle School, a book which follows Mia Lee, a spunky sixth grader with a wheelchair and a love for stop motion animation, as she navigates the ins and outs of middle school and runs for video production club president.

Mia Lee, like Melissa, is not defined by her disability, the 13-year-old says. For Melissa and Mia Lee, having CMT is part of who she is, but certainly not all of who she is. That’s what Eva thinks is special about this book.

“She happens to have [a disability]. She talks about it in the book like it’s a part of her life, just as matter-of-factly as she talks about other parts of her life,” Eva says. “I think the way she describes her disease is like, ‘Oh I have Charcot-Marie-Tooth — sounds like some fancy French dessert, right? Well it’s not.'”

The sisters are hoping to get the book into the hands of kids who have muscular dystrophy, to show them that they are heroes of their own stories, just like Mia Lee — and just like Melissa. (For her part, Eva calls herself, “the sidekick.”)

Though she’s still waiting for an American Girl doll with a disability, Melissa isn’t holding her breath. She’s got her mind on other things, primarily brewing up more adventures for Mia Lee.

“Maybe in the future, I’ll have a sequel to the book,” she says.