Nearly forty-five years ago, after John and Lois Washburn’s two eldest children were diagnosed with spinal muscular atrophy (SMA), the couple began volunteering with MDA and haven’t looked back.

Today, John and Lois live in Manchester, N.H., where they are now retired, and they often recall with fondness more than four decades of involvement within the MDA community. It all started when, as young parents, their oldest son, Andy, was diagnosed with SMA at age 2 in 1965; a short while later, their daughter Leslie received the same diagnosis.

Soon after, John and Lois began attending local tapings of MDA Telethons in New Hampshire. From there, they learned about local chapter meetings in Salem, N. H., where they lived at the time. There, they met other parents whose children had muscular dystrophy, and it was from this group that John and Lois formed lifelong friendships and were introduced to many volunteer opportunities. All these years later, they still have dinner with the group of friends they made at those meetings. 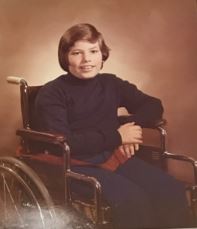 In 1975, Andy, now 52 and living in Alexandria, Va., was named MDA Ambassador for New Hampshire. When asked how Andy was selected for such a role, Lois laughs and says, “Andy has the gift of gab, for one thing. One year, at Christmas, MDA came around in a van and distributed gifts and the staff was rather amused at his responses and ability to express himself.”

Two short years later, their second child, Leslie, took on the role of Ambassador as well. As Lois explains, “Leslie attended a lot of the things Andy went to, so she was also a good candidate. That was fun. We met a lot of people and did a lot of things in those years.” John recalls that, when Leslie was ambassador, she got the opportunity to ride in a side car during a NASCAR race. 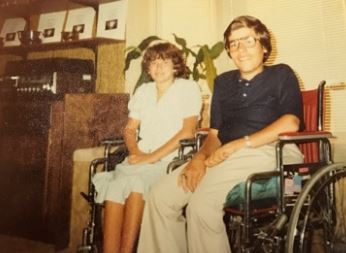 Andy, who has been in a wheelchair for 46 years, currently works for the Justice Department ensuring that companies comply with the Americans with Disabilities Act (ADA). He has personal care assistants who help him daily, and his parents see him every few months as well.

Leslie, now 50, met her husband at MDA Summer Camp when they were camp counselors together at Camp Allen. He was from England, and though he had to return after the summer was over, they kept in touch. Ten years later, he came over to visit friends, and they started dating. They have been married for 22 years and have two children. Leslie currently works as the director of a TRIO program, a federally funded program to help disadvantaged students. But, as Lois says, Leslie spends most of her time shuttling her children around in her van, which she drives with hand controls. 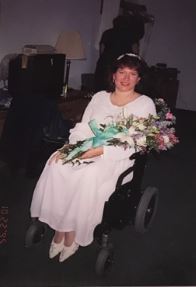 Once, when Leslie was chosen to receive a National Achievement Award from MDA, the family, including their third child, Tom, got to travel to Las Vegas where they met Jerry Lewis. However, as Lois says, the highlight of their trip was meeting Bob Sampson, who was vice president of facilities for United Airlines. Sampson was an outspoken advocate for disability rights who was diagnosed with muscular dystrophy at age 5.

Many years have passed since Leslie and Andy were active Ambassadors, but John and Lois still volunteer as much as they can. When John retired 19 years ago, the director of MDA’s New Hampshire office asked what they were going to do with their time and suggested they get involved with New Hampshire’s very first MDA Lock-Up. As Lois says, “We had so much fun, so I asked, ‘If we haven’t messed things up so badly, could we do it again sometime?’ And here we are 19 years later, still doing Lock-Ups!” John says that if a parent is looking for ways to volunteer, driving for MDA Lock-Ups are a fantastic way to help the MDA community and meet new people. 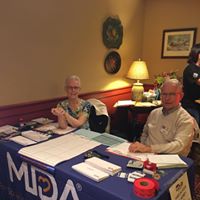 As the Washburns have been volunteering with MDA in some capacity since the mid-1970s, they have noticed major changes, both in the way the public understands neuromuscular diseases and how the medical community treats them. After their children’s initial diagnosis at the MDA Care Center in Hanover, N.H., Lois says she felt hopeful for a full life for her kids. “I don’t remember exactly what the prognosis was, but we did know that there were more severe types of SMA (Leslie and Andy have SMA type 3) and that our children would probably lead a relatively normal lifespan.”

She recognizes that there have been great strides made over the last four decades for people with disabilities. “I think attitudes have changed,” Lois says. “Access to advanced wheelchairs and devices has made it possible for my kids to attend schools of higher learning, hold down jobs, have families, drive vehicles, etc. The progress that has been made that we’ve seen for ourselves is amazing!”
Volunteering has changed, too. As Lois points out, “Practically everything is done online now, which makes it so much easier, because our jobs are to check people out after they’ve done fundraising and to count money. Many years ago, we were counting containers of pennies, and now everything is done online and it’s much much easier. It’s easier, too, to ask someone online to give a donation, rather than face to face and approach somebody.”

On the other hand, one of the Washburns’ favorite volunteer activities hasn’t changed much at all over time. “We enjoy stuffing envelopes. It’s mindless. You can do it and visit and chat and socialize.” They feel very strongly that parents of a child with neuromuscular diseases should seek out a community around them. 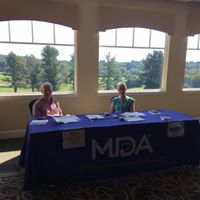 John and Lois are active volunteers in other communities, as well. When Lois’ brother, Jim, was diagnosed with ALS, at 67 years old, she participated in a walk organized by the local ALS organization. Although Jim is now in a wheelchair, Lois reports, “he has not lost his voice and, since he is a storyteller from way back, this ability has kept him in relatively good spirits.”

John has volunteered for nearly two decades at the local food bank, and he has donated blood and platelets. In fact, he was named the American Red Cross Hero of the Year in 2013 for his work. As Lois says, “He’s my hero too!”

When talking to the Washburns about their life and accomplishments, it is apparent that what they are most proud of is the amazing lives their children lead. As Lois eloquently states, “I’m in awe of my children, really. We’ve learned a lot from them. As I say, they’ve done things beyond what we thought they would be able to do. People say what a good job we did, but mostly it’s just them wanting to live as normal a life as possible and they’ve done an amazing job at that.”