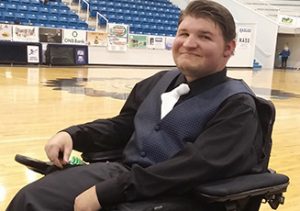 When Zac Henderson could no longer play baseball, he joined the school jazz band. When he could no longer hold his instrument, he migrated to the local 4-H. Then it was on to managing his high school’s basketball team. Now Zac has his own film production company thanks to working on the basketball team’s highlight reels.

“I don’t let this wheelchair keep me back,” he says. “If there’s something I want to do, I’m too stubborn to not go after it and do it anyway.”

Since Zac was diagnosed with DMD at 4 years old, that’s exactly what he’s done, with his family’s complete support.

“We didn’t let it really define us,” Shelly Henderson said of her son’s diagnosis. “We didn’t change much until we had to. We just kept moving forward just like any family and any typical 4-year-old kid. Just letting him do whatever came natural and whatever he wanted to do. We would just make adjustments as things progressed.”

When Zac wanted to show lambs with 4-H and the Future Farmers of America, his family borrowed an all-terrain wheelchair from MDA. Then, his grandfather built a special contraption so Zac could lead the lambs from his wheelchair. He ended up winning awards.

“Of all the things he wanted to do in FFA or 4-H, he decided to show these animals, so we had to make an adjustment,” Shelly says. “We weren’t going to tell him no. We just found a way to do it.” 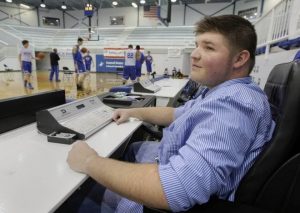 When Zac joined the high school basketball team as manager, it wasn’t any big surprise. He was just doing what he wanted to do.

First he recorded statistics for the coach, then he started taping games and crafting the team’s highlight reels. Zac taught himself how to use software to edit video, adding music and special effects.

He was living unlimited.

“I get on the computer and there’s no limit to what you can do with the computer,” he says of his passion for video editing. “I have the free rein to do whatever I want.”

Joining the basketball team has turned into something so much bigger. Now Zac is the owner of his own sports video production company called Legit Films Sports Videography.

He’s created videos of football games, graduations and even birthday parties. The business may only be six months old, but the demand keeps growing.

There’s no stopping him.

“Whatever I want, whatever I set my mind to, I can do it,” he says.