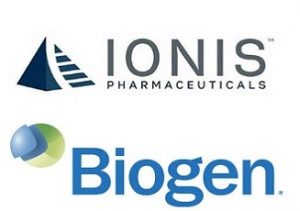 In a joint statement today, Biogen and Ionis Pharmaceuticals announced that Biogen has completed the rolling submission of a New Drug Application (NDA) to the U.S. Food and Drug Administration (FDA) for the approval of nusinersen, an investigational treatment for spinal muscular atrophy (SMA).

Submission of the NDA is the first step toward getting approval of nusinersen to treat SMA in the United States. The FDA now has 60 days to either accept or reject the NDA. If accepted, the agency will begin review of the application, a process that typically takes 10 months. However, Biogen has applied to receive Priority Review which, if granted, would shorten the review period for the drug from 10 months to six.

Today’s development follows news in August that showed encouraging interim results from the late-stage ENDEAR clinical trial to test nusinersen in infants with type 1 SMA. Based on those results, investigators stopped the trial to allow all participants to transition into an open-label trial called SHINE, in which all infants are being treated with the drug.

In addition to the NDA filing with FDA, Biogen plans to submit a Marketing Authorization Application (MAA) for nusinersen to the European Medicines Agency (EMA) in the coming weeks, and will initiate regulatory findings in other countries in the coming months. The company also is working to open a global expanded access program (EAP) for eligible patients with infantile-onset SMA in the coming months.

For more information on who will be eligible to receive treatment with nusinersen and answers to other questions in connection with the drug, listen to a podcast provided by Biogen here.

Nusinersen is designed to modify SMA

In SMA, very little full-length SMN protein is made. Instead, most of the SMN is in the form of a short, unstable protein. Full-length SMN is needed by muscle-controlling nerve cells, known as motor neurons, in the spinal cord. Without the protein, loss of motor neurons from the spinal cord occurs, with resulting weakness and atrophy of the voluntary muscles. In the severest forms of the disease, premature death may occur because of failure of the respiratory (breathing) muscles.

Infants with type 1 SMA can’t sit or hold their heads up, and progressively lose what movement ability they have. These babies typically don’t live past the age of 1 year, with death often due to respiratory failure unless the infant is placed on a ventilator. Other, milder forms of SMA (types 2, 3 and 4) involve difficulties with movement and are associated with normal or somewhat reduced lifespan.

Nusinersen is a disease-modifying antisense drug, one of a class of experimental therapeutic molecules designed to target genetic instructions at the RNA stage (an intermediate step between DNA and protein manufacturing stage inside cells). It is designed to increase production of the needed SMN protein.

Ionis and Biogen have been testing nusinersen both in blinded and open-label studies, and in patients with types 1, 2 and 3 SMA.

Interim analysis from the phase 3 ENDEAR trial, conducted in 120 infants with type 1 SMA, found that the drug was safe and well-tolerated and that infants receiving nusinersen experienced a statistically significant improvement in the achievement of motor milestones compared to those who did not receive treatment. In rare instances, as with the ENDEAR trial, when evidence of efficacy is sufficiently strong, a blinded trial can be halted so all patients can benefit from treatment. Along with ENDEAR participants, patients in the control sections of a phase 2 study called EMBRACE also are eligible to transition to the SHINE open-label study which aims to evaluate the long-term safety and tolerability of nusinersen.

Other studies of nusinersen are ongoing. These include CHERISH, which is testing the drug in later-onset SMA, and NURTURE, for infants with a genetically confirmed diagnosis of SMA who are not yet showing symptoms.

MDA has funded foundational work in SMA and invested nearly $750,000 in awards to Adrian Krainer at Cold Spring Harbor Laboratory in New York for early-stage development of nusinersen. Since its inception, MDA has invested more than $45 million in SMA research.

“Today we mark an exciting step forward for our families living with spinal muscular atrophy as nusinersen formally moves toward FDA review,” said MDA Scientific Program Officer Amanda Haidet-Phillips, Ph.D. “It’s an encouraging sign of progress and hope for all of us in the SMA community who have worked together to develop an effective treatment for this life-threatening disease.”

Nusinersen has been granted orphan drug status in both the U.S. and European Union and fast-track designation in the United States. If approved, it would be the first disease-modifying drug approved for the treatment of SMA.

For updates on today’s news, be sure to check back at mda.org.