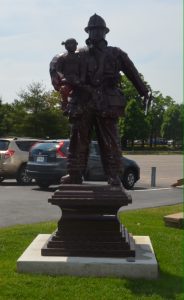 More than 100 Boston fire fighters and dignitaries, along with the the International Association of Fire Fighters (IAFF),  MDA and Boston Fire IAFF Local 718, united today on Memorial Sunday, an annual day to honor Boston’s fallen fire fighters, to celebrate more than 60 years of partnership in the fight against muscular dystrophy, ALS and related muscle-debilitating diseases.

The ceremony included the unveiling and dedication of a 10-foot-tall steel statue that will overlook the Boston Fire Local 718 headquarters and serve as a standing tribute to America’s professional fire fighters and their commitment to find treatments and cures for muscle-debilitating diseases.

The statue was originally commissioned by MDA and installed at its former Tucson Headquarters in 2004 to mark the 50th anniversary of the IAFF/MDA partnership, where it stood until 2014. Now, more than a decade later, the commemorative statue has made its way home to the Boston Fire Local 718 headquarters – close to where it all began and where it will remain as a symbol of fire fighter’s strength and compassion.
IAFF support for MDA began in 1954 in Boston when the organization committed by proclamation to support MDA until a cure is found. The IAFF’s unwavering commitment to MDA has remained strong to this day, providing steadfast drive and uncommon caring to help free kids and adults from life-threatening diseases. To date, the IAFF has raised more than $583 million for MDA through its spirited Fill the Boot drives and other local fundraising events.