Every August is Spinal Muscular Atrophy Awareness Month, and this year we have a lot to celebrate.

At the beginning of August, Biogen and IONIS Pharmaceuticals announced encouraging results from a late-stage clinical trial testing an experimental drug for infants with SMA type 1. The drug is called nusinersen and is designed to increase production of the needed SMN protein. Positive interim results from this study led the researchers to halt the trial and invite all participants to receive the drug, instead of having some of the patients continue to receive placebo. Biogen plans to file for regulatory approval for nusinersen by the end of 2016. Biogen’s application will mark the first ever disease-modifying drug submitted for approval in the US for SMA. Together with the NIH and CureSMA, MDA funded the critical early-stage research that gave way to the development of nusinersen.

This progress is made possible by long-term investments in research that are now giving way to promising therapies reaching the clinic. For SMA specifically, the pace of therapy development is unprecedented, given that it has only been a decade since the causative gene was originally discovered. In the past ten years, we have already witnessed the first human trials testing therapies targeting the altered SMN gene, the underlying cause of disease. In total, there are seven therapies currently in clinical trials for SMA with over a dozen other approaches nearing the clinic.

MDA’s investment in biomedical research has helped bring us to where we find ourselves today. MDA’s mission is to save and improve the lives of those living with neuromuscular diseases including SMA , muscular dystrophy and other disorders. MDA fulfills our mission by funding biomedical research, providing expert clinical care and support through a network of more than 150 specialty care centers nationwide, and championing public policies and programs that benefit those living with neuromuscular disorders and the people who love them.

MDA is also dedicated to ensuring increased federal funding for research, which is why sustained robust funding for the National Institutes of Health (NIH) is one of MDA’s policy priorities. The federal government is the largest funder of medical research in the US, and recent SMA therapy developments are examples of progress that is possible when different funding sources come together around research.

Funding for biomedical research is key to finding treatments and cures for SMA and all neuromuscular disorders. Now is a critical time for federal research funding as Congress is in the process of determining the 2017 federal budget, which includes funding levels for the National Institutes of Health (NIH). Please join us in advocating for sustained and robust NIH funding by taking action today. 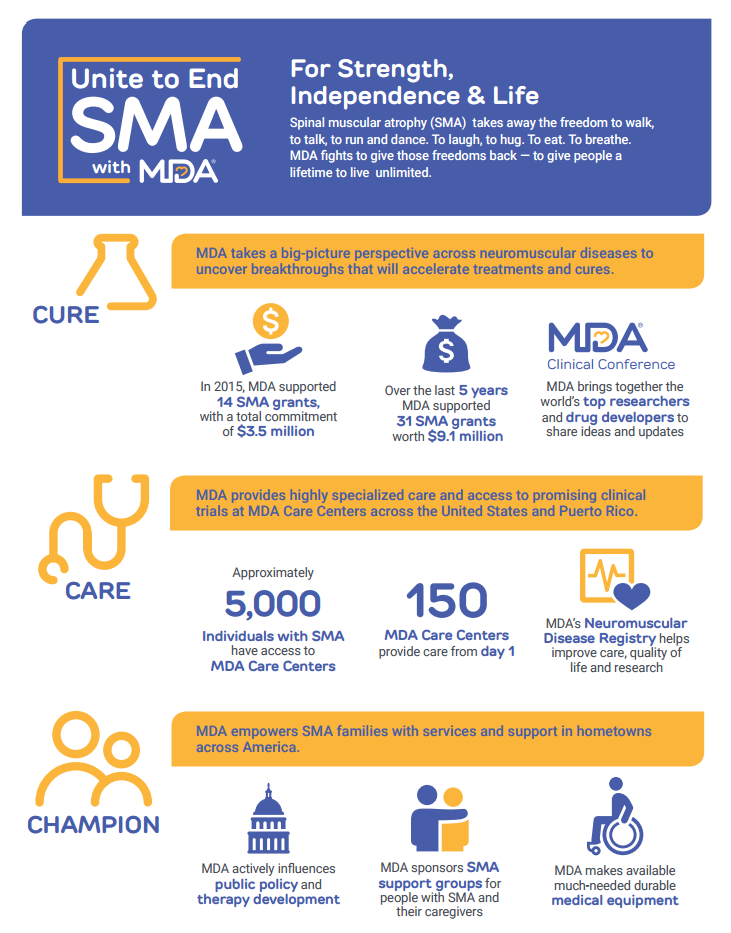 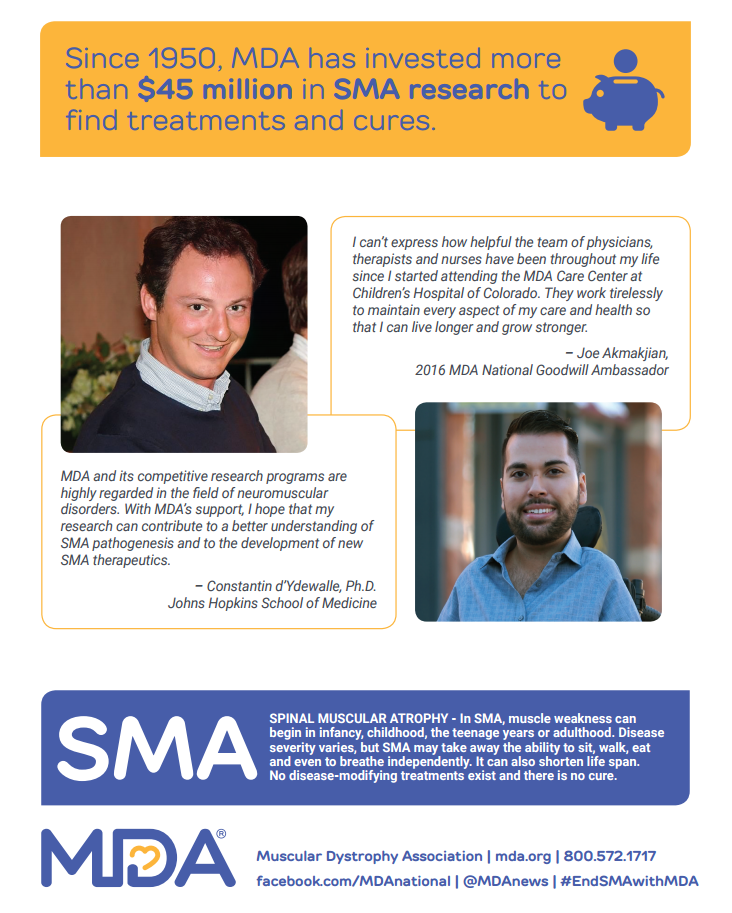