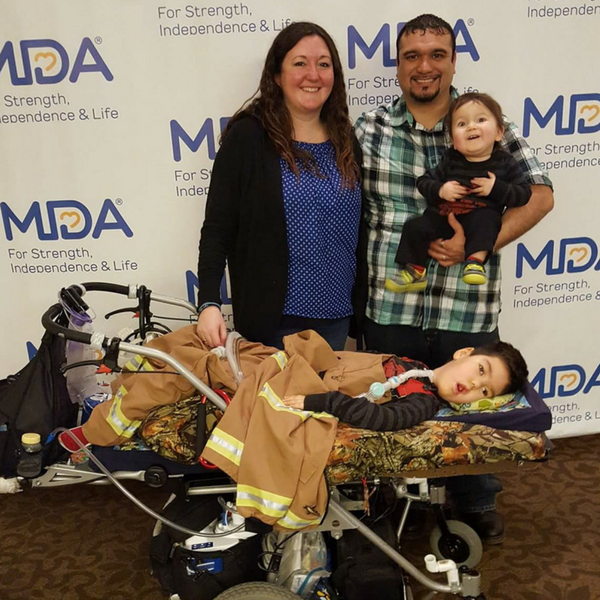 On a cold winter’s day in January 2016, Amy and Adan Medina set out with their two sons from their home in Fond du Lac, Wisconsin. Their destination was The Johns Hopkins Hospital in Baltimore, Maryland, a daunting 16-hour drive, but one filled with determination and hope.

Their youngest son, Javier, only five days old, had just been born with Spinal muscular atrophy (SMA) type 1, the same disease impacting his older brother, 4-year-old Mateo. Amy and Adan wanted to see if they could get Javier into a clinical trial for a drug called nusinersen that they learned about shortly after receiving his SMA diagnosis a few weeks before Javier’s birth.

It was a whirlwind time for the Medina family, but the trip represented a special opportunity to take part in scientific research that could have a tremendous impact on Javier’s development. For years, with the help of MDA, Amy and Adan sought out and accessed the best clinical care for Mateo, and now, for the first time, a drug was available that could change the course of the disease in their youngest son, and, hopefully, someday down the line, for both sons.

August is SMA Awareness Month, and Amy Medina agreed to share her unique family story of raising two boys with SMA type 1 in the hopes of helping other families in the same way she was helped when first faced with this disease.

In the latter stages of her pregnancy with Mateo, Amy started to grow worried that her son was not kicking or moving around very much. Concerned, she brought it up to her doctor, who said that everything was probably OK. “I was just told that I was having a big baby,” she recalls.

When Mateo was born, however, it was clear that something was wrong. “He was making only small noises,” says Amy. “He wasn’t crying. He didn’t kick his legs or arms. He had low tone and his neck couldn’t support his head.” After an additional set of tests, doctors sent him to a children’s hospital in Milwaukee for further observation. After three days, Mateo was discharged and his parents were told that he would grow out of whatever it was he was dealing with.

At home, the problems only intensified. After a couple days, Amy and Adan saw that Mateo’s breathing was difficult and labored, although when they took him to the hospital, doctors once again were not overly concerned. “We went to the ER,” says Amy. “We said he was breathing funny, but the doctor said we were overreacting as first-time parents.”

At his two-week appointment, the doctor said it was time to get to the bottom of Mateo’s symptoms and sent him back to Milwaukee for further observation. When he was one month old, Mateo finally received his diagnosis: SMA type 1. 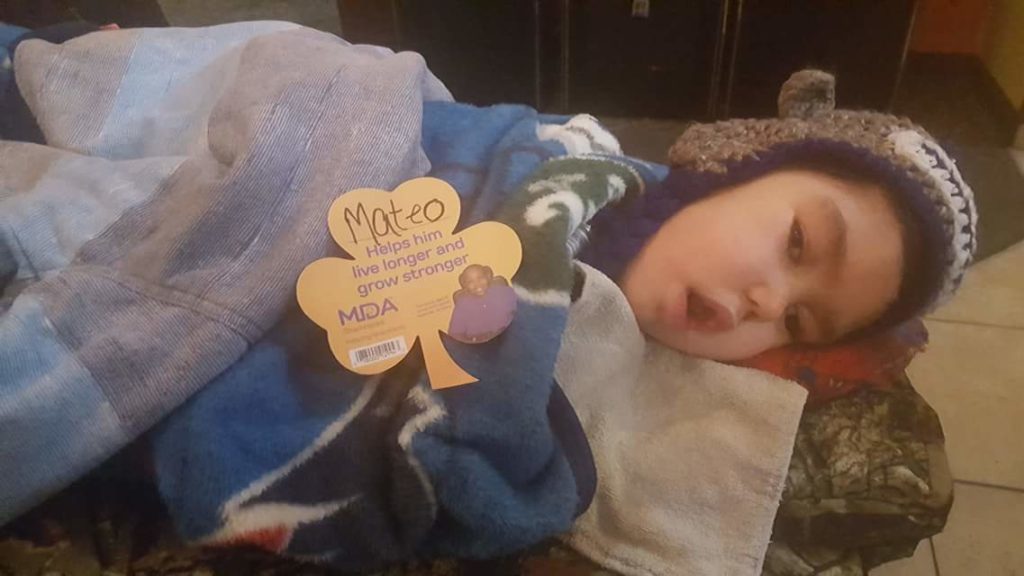 Amy remembers the moment vividly. “The doctor said Mateo most likely had SMA and that he would not see his second birthday. I began crying hysterically thinking my baby is going to die. Adan, who was cleaning up Mateo’s diaper, asked what was wrong, then the doctor said ‘I’ll give you guys some time alone’ and just walked out of the room. It was a hard way to deliver the news.”

On the ride home, still devastated and in disbelief, Amy checked her Facebook feed, where she saw a post that would change the course of their journey. “It was the strangest thing,” says Amy. “I jumped on Facebook and immediately saw a friend post about SMA. I messaged him and asked how he knew the disease. His wife’s best friend’s daughter had the disease and lived only a mile away, and he had shared the post because it was SMA Awareness Month.”

The Medinas were happy to find another family that could understand their situation and soon connected with them. The family’s advice was invaluable. “They said to go to Madison, Wisconsin, and see Dr. Mary Schroth at American Family Children’s Hospital,” says Amy.

“A week later we saw her, and she saved our son – she said not to look at [SMA] as a death sentence. She treated him differently than previous doctors and told us to be proactive. We started Mateo on a bi-pap, a cough assist and a feeding tube.”

Mateo, however, was not out of the woods. Over the course of the next several months he would be hospitalized numerous times. “We had to call 911 at least ten times because he had stopped breathing,” recalls Amy, who often took the lead in resuscitating him. At seven months, given the frequency of his breathing problems, the Mendez’s made the difficult decision to have a tracheostomy done on Mateo. Although a momentous step, it stabilized his breathing and prevented further ER trips.

Today, Mateo is a happy six-year-old, having long since blown past the life expectancy he was given by the doctor who diagnosed him. He is receiving excellent care from his parents and is benefiting from MDA’s cutting-edge clinical guidelines.

Says Amy: “He goes to school full time. He rides the school bus and is very active in the community. He also recently went to MDA Boot Camp with the firefighters.”

“And whenever Mateo sees firefighters, his eyes twinkle and light up.”

With Mateo stable, Amy and Adan decided to have another child, well aware of the potential risks. “We always knew we had a 1 in 4 chance of having another SMA child; however, we looked at it as 75% chance of the child not having SMA. Either way, whether we had an SMA child or not, we’d still love the baby and we were used to special care.” 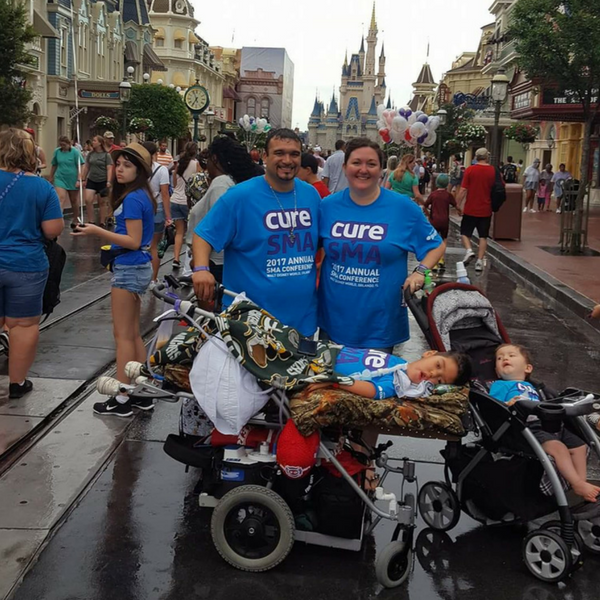 Although the odds were in their favor, they would soon learn shortly before Javier was born that he too had SMA type 1. “It was not any easier than hearing it the first time [with Mateo],” says Amy. “I cried. We didn’t know what to do. We were worried about telling our family. It was so devastating and crushing.”

However, amidst the crushing diagnosis, there was a ray of hope. Dr. Schroth mentioned to the Mendez’s that there was a clinical trial taking place for a revolutionary new drug that might be able to help Javier once he was born. Amy and Adan reached out to doctors at The Johns Hopkins Hospital in Baltimore, where the trial was taking place, who suggested they bring Javier to see if he qualified for the trial.

Five days after Javier was born in January 2016, the family made the 16-hour trek to Baltimore. After being evaluated for a week, it was determined that Javier was eligible for the trial and could start receiving the drug, nusinersen (now called Spinraza).

Javier has received eight injections to date and has produced results that are nothing short of miraculous. “He has shattered the capabilities of what a child with SMA type 1 could accomplish,” says Amy. “Looking at him you don’t know he has SMA. Granted, he is delayed 4 months in development and doesn’t crawl, but he can walk with assistance. He can stand up if you pull him up. He rolls. He eats everything by mouth; he doesn’t even have a feeding tube. He can say a few words and looks pretty typical.”

It was this type of dramatic impact that convinced the Food and Drug Administration (FDA) to approve nusinersen last December, the culmination of years of funding by MDA to advance the promising science underpinning the drug.

Given the success of Spinraza on Javier and other kids like him, the Medina family is eager to also get Mateo access to the drug. Although Mateo did not get the benefit of receiving the drug as a baby, the Medinas feel that he is an ideal candidate to receive treatment. 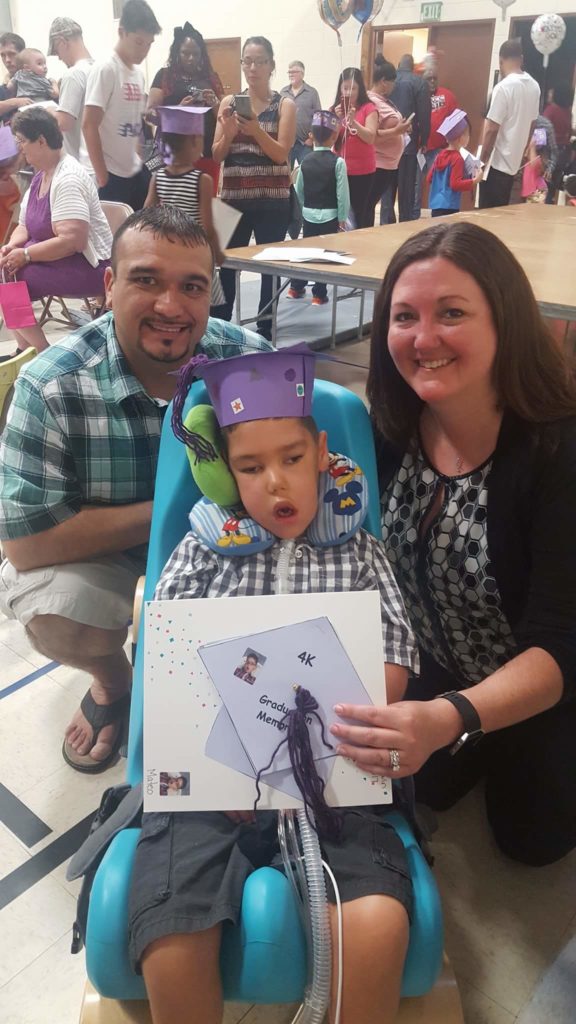 Unfortunately, getting Mateo Spinraza has proven difficult, and thus far the family has been rejected by insurance. “We’ve gotten two denials from private insurance and one denial from Medicaid,” says Amy. “The court hearing is August 1 to appeal our denial for Medicaid. The denial is based on the fact that he is ‘trached,’ which is an automatic exclusion for the drug. In the letter they sent back with the denial, they basically said there’s no proof this can help him or his quality of life, and that his prognosis is slim.”

When Amy read the denial, she knew they were underestimating Mateo. “We are going to appeal it and show them that he’s six, and the evidence shows that its worth trying. After all, he wasn’t supposed to have lived to his second birthday.”

The importance of MDA funding and advocacy

Although there are inevitable ups and downs in raising two boys with SMA type 1, the Medina’s have provided Mateo and Javier with unyielding love, perseverance and hope for the future. Much of this hope can be traced back to MDA’s continued commitment to funding research that has helped to produce drugs like Spinraza, along with being a leader in providing cutting edge clinical best practices for SMA. As a result, better outcomes are available now for children with SMA, including Mateo and Javier, than ever before.

One key component to furthering MDA’s mission is awareness. Amy remembers how important it was to come across the Facebook post from a friend that ultimately pointed them towards Dr. Schroth. The Medinas hope that by sharing their family story, they can provide comfort and hope to other families newly faced with an SMA diagnosis for their child.

Although difficult, SMA is something that parents like Amy and Adan ultimately learn to adapt to.

“Getting the diagnosis of SMA is devastating. It didn’t get any easier the second time around, but over time, this life gets easier.”

As for advice for other parents in her situation, Amy replies, “Don’t give up. Do your research and look at what’s out there. If you want to fight it, there’s plenty of resources available – whether its MDA, Facebook groups, or out in the community.”

Help adults and kids like Mateo and Javier live longer and grow stronger.