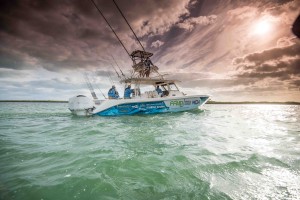 Muscular dystrophy couldn’t keep Paul Robertson from the water, and he doesn’t want muscle disease to stop anyone from doing what they love.

A mere 11 months after Paul first approached MDA with his idea, he was captaining a brand new boat with an 8-person team at FFMD’s first tournament — the Jimmy Johnson National Billfish Championship in Key Largo, Florida. 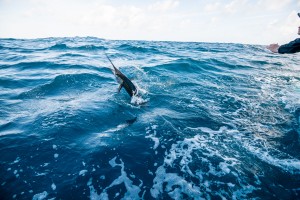 The FFMD team came in sixth out of 31 boats during the competition (a very respectable showing for a maiden voyage) and netted an award for getting the last bite one day. In addition, the group staffed a tent, organized a raffle and sold swag, all to help raise funds and awareness for the MDA.

Paul’s goal is to send $1 million back to MDA each year, raised from tournament winnings, fundraising and corporate sponsorships, like the one from Everglade Boats, the manufacturer that donated a significant portion of the team’s boat fresh off the assembly line.

But Paul’s vision isn’t limited to the fundraising and sponsorships. He also wants to create more teams focused on different kinds of fishing and captained by other fishing enthusiasts who have a muscle disease.

“Why not let someone else feel good about what they can do?” he said.

Paul was diagnosed with limb-girdle muscular dystrophy 15 years ago and was in denial for at least 12 of those years, he said. A bad fall and words from a friend got Paul on the road to where he is today.

“Someone told me, when I first thought about this — when the idea was there and it was on the sidelines — ‘Dreams expire.’ They do,” he said. “So, I couldn’t allow myself to sit back five years from now and all of a sudden find out that maybe I’m in a wheelchair, my mobility has declined, and I can’t do this, and say, ‘I could have done this, but I didn’t.’”

The whole enterprise has been therapeutic for Paul. He’s happy to be doing good, while doing what he loves — being out on the water — and he hopes FFMD can make a difference in others’ lives too.

“To put this in perspective, for me, it’s almost been what allowed me to break out and freely and openly talk about being affected with a muscle disease and not be ashamed of it,” he said. “It is what it is. Big deal. Let’s roll, let’s keep living life, let’s move forward.”

Seeing his vision come to life in Key Largo was fantastic, Paul said. Besides the support from 30-plus family and friends who came to cheer on FFMD, there were other indications that he was on the right path. Paul was thrilled, for example, to meet others who had personal experience with muscular dystrophy and loved what the group was doing. 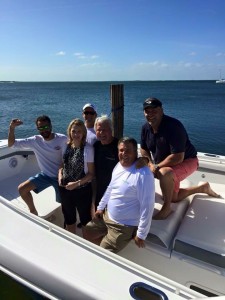 “It’s priceless. You can’t put a value on doing that,” he said. “Sitting in a restaurant one night, someone walks up and says, ‘Hey, where can I get one of those shirts? My cousin’s daughter has muscular dystrophy.’ That’s just like, wow.”

Next up is a tournament in Key West, Florida, and after that the team is off to the Chesapeake Bay in Maryland. With a parade of trucks, trailers and boats plastered with the MDA logo, the group is sure to have more encounters with people whose lives have been touched by muscle disease.

“We’ve got this caravan going from city to city, all with the MDA logo and our logo and pictures of the boats, out there bringing awareness to muscular dystrophy and those affected with muscle disease.”