Erin Brady Worsham is a Nashville artist, writer and speaker. Since her diagnosis of ALS in 1994, Brady Worsham has had her work featured in exhibits throughout the U.S., Canada and Australia and has received several accolades for her artistic achievements. 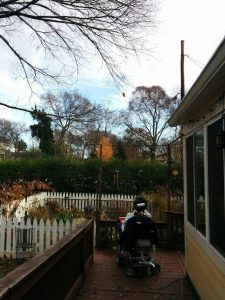 For me, our series of very unfortunate events started with the mysterious disappearance of our night nurse. One minute she was doing four nights a week and the next she was calling out for five consecutive scheduled nights. Everyone at the office had very little to say about why she was gone. We later found out that they were having trouble reaching her, too, and that she had had back surgery . Who knows if she’ll ever be back?  I liked her, too. She was a positive presence. Our other night nurse graciously picked up another night, but that still left three nights without a nurse while the office looked for one.

When there is no night nurse, I sit alone at the computer in the kitchen and my husband, Curry, sleeps close by on the futon in the sunroom.  If I feel a problem developing, I can call him with two different alarms I have on my communication device. If the quieter one doesn’t wake him up after a bunch of tries, I hit him with the big alarm. I very seldom have to sound that one twice!  I love my communication device and I feel safer with it, but every day it tells me it’s getting older. I know I could not wake Curry up without it, so it’s absolutely critical that I have it on those nights without a nurse.

You may be wondering why I have such a crazy schedule and stay up all night. Well, I’ve always been a bit of a night owl and I like working at night on the computer, but I choose to stay up for safety reasons. Curry has to sleep. If he doesn’t, our family falls apart. If, by chance, a day nurse calls out and Curry has to fill in, I can sleep peacefully because I know he’ll be awake. But if I were to sleep at night while Curry was sleeping, I might not perceive a problem developing and could wake up in a no air situation with little time to call him. I get plenty of daylight because I don’t go to bed until around noon. The best of both worlds…

I had been worrying about the age of my communication device for some time. In fact, we had tried to order a new device last year, but Medicare turned us down. I felt a greater urgency to get a new device when we lost that night nurse, so I e-mailed my speech therapist to see if we couldn’t just re-submit the request. I truly must have had a premonition, because the very next morning the power jack on my device broke and I could no longer communicate. The only sound I could make was a tiny beep from the box that controls my device. If you’ve never experienced the inability to communicate, you don’t know what hell is. That was on a Wednesday. Curry called the company and arranged for a loaner to be sent out on Thursday. It was supposed to get here on Friday. The time passed slowly. I went to bed around noon on Thursday, excited at the thought of a communication device arriving the next day. I fell asleep.

I woke up and knew instinctively that it was much later than 6 p.m., which was when Curry was supposed to be home. I beeped my little beep, which was being loudly amplified into the kitchen by the baby monitor, and expected to see Curry come walking in. Instead it was Cherie, my wonderful day nurse, who came in the room and she looked tired. “Where’s Curry?” I mouthed. There was a pause followed by, “You don’t wanna know.”  My heart sank. All the worst fears of my Irish imagination were coming true. “Curry was in an accident. He’s at Vanderbilt Hospital. He was hit by a car.”  Inside my mind I was screaming non-stop O-my-God-O-my-God-O-my-God!  Cherie first heard about it around 4 p.m. when a witness called to tell us what happened, so Curry had the presence of mind to ask them to do that. Curry talked and texted with Cherie through the night and he actually thought they might let him come home.

I don’t think Curry understood how badly he was hurt. We finally found out that he had nine broken ribs, a broken vertebrae and a broken tailbone, not to mention cuts and abrasions on his face. Here’s what happened… Curry was driving on I-40 by the airport when the front left tire blew out on his van. It was only with difficulty that he was able to maneuver the van to the shoulder. He was way over on the shoulder and easily got out of the van and walked around to the front to see if the wheel was damaged. He was relieved to see that it wasn’t, but his spare tire was sitting in the driveway at home, where he hadn’t gotten a chance to attach it to the rear underside of the van. That was actually a Godsend for him. If he had been at the rear of the van getting the tire, he would have been killed. Curry leaned back against the hood to call the tow truck. A split second later he heard an enormous crash as his car was backended by another car going at top speed. He thinks he lost consciousness then, with the exception of a very surreal image of a car flying past him. He came to in the ambulance and after a while he said he was talking some sense. They rushed him to Vanderbilt Hospital. We understand that the woman in the other car was also taken there after she was extricated from her vehicle. A policeman friend was able to get pictures of Curry’s van and the woman’s car. Looking at those horrific images, I thanked God, once again, for sparing Curry’s life, not to mention the woman’s. From the picture of the van, it looks like after the initial bone-breaking impact of the grill against Curry’s back, his head whiplashed back into the windshield. Then he was thrown forward through the air like a ragdoll. It must have been his Guardian Angel that prevented him from being thrown into the traffic or against the unforgiving guard rail… Curry Worsham was damn lucky to be alive. 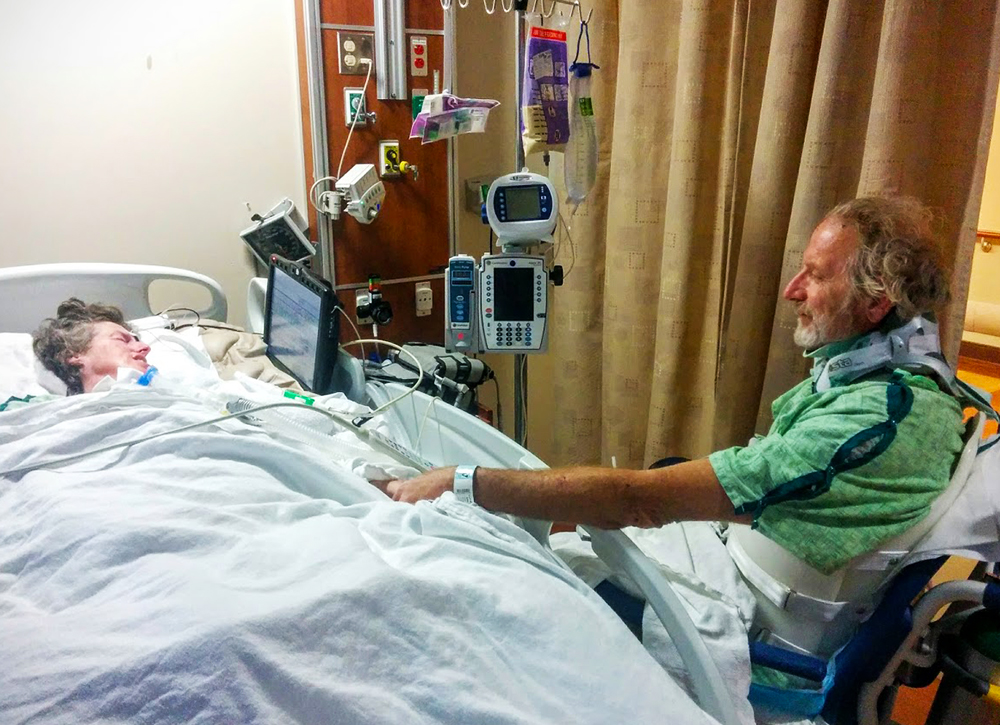 My poor day nurse had been with me for close to 24 hours when the agency decided, to my horror, that I needed to go to the hospital, too, in order to receive care. There weren’t nurses to cover for Curry not being there. They scheduled an ambulance to come pick me up. Just by chance, my loaner communication device arrived at the same time as the ambulance. It needed to be programmed and I couldn’t risk anything happening to it, so I left it behind for our son, Daniel, to bring to the hospital later. He was driving in from the University of Tennessee in Knoxville to help over the weekend… But when the ambulance pulled away from our house, I was alone, armed only with my written plan of care and only able to communicate with a tiny beep. I was terrified. My sole consolation was that I was going to where Curry was…

During the time we overlapped at Vanderbilt Hospital, I saw Curry almost every day. It was good for us to be together, especially when Daniel was there, but it was obvious that he was in pain. My anxiety level dropped drastically after Daniel set up my communication device. I think the nurses, care partners and respiratory therapists also appreciated not having to guess what I needed or wanted. I wanted to stay with Curry, but after six days they transferred me to Trevecca Healthcare facility not far away. I would have been terrified all over again, had it not been for our dear friend, Iva McGavock, going with me. She made sure my communication device was set up correctly, which was incredibly comforting for me. Another dear friend, Brian Hill, and his daughter, Alix, came and set up my computer bedside so I could talk to Curry. Man oh man, I loved those conversations!  They kept me sane.

Curry made rapid progress after I left and was released after twelve days in the hospital. After his release I saw him every day, but he still wasn’t ready for me to come home. The physical therapist, Josh Mitchell, and his team, who were keeping me limber, trained us on the Hoyer lift, which we would definitely be using at home. I had never spent so much time in bed, which was good for neither my lungs nor my behind. Because of that, I had a lot of secretions in my lungs when we deflated my cuff, and I had very little tolerance for sitting up in my chair. The latter was very disheartening, because I would normally be up in my chair for 14 to 16 hours. I saw a long, slow rehab ahead of me at home.

I met some truly wonderful people at both Vanderbilt and Trevecca, but there’s no way they could care for me like Curry and my nurses did. They have too many patients!  It was a happy day when I left Trevecca 19 days after I entered it. Curry and Cherie took me home and I sat outside for two hours watching the birds and trying to believe I was really home. It wasn’t a happy ending, not yet. Curry’s back continues to hurt and I pray for God’s healing touch. There have been some rough, emotional days as my mind worked to mentally leave behind the places I had been and truly come home. Peace has entered my heart again and normalcy is creeping back into our lives, just in time for Love’s Incarnation into our world on Christmas.

So, what happens when the caregiver needs care?  A lot happens and adjustments must be made. But if you’re blessed to have that beloved caregiver still in your life, it’s a reminder not to take anyone or anything for granted and to take every opportunity to tell those you hold dear that you love them. My gift this year is having my family together under one roof again. My heart is full.

Help fund research for treatments and cures for ALS and all neuromuscular diseases.