Mark Eisenberg was diagnosed with Duchenne muscular dystrophy at the age of 4, but he hasn’t let it stop him from achieving his dreams. He recently graduated from college, where he became largely involved in muscle disease awareness. He now works as a blogger, raising awareness through his current blog, Duchenne Talk. 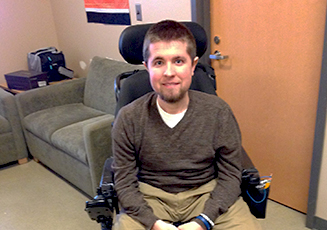 Two years ago was supposed to be the last year I would ever see. When I was diagnosed with Duchenne muscular dystrophy, the doctor said I wouldn’t live past the age of 21. I didn’t actually hear any of this or understand it, thankfully, because I was only 4 years old at the time. As it turns out, I was one of the “lucky” ones for whom the disease progressed more slowly. I wasn’t in a wheelchair full-time until the age of 17.

The fact that my diagnosis came at such an early age made a huge difference in how it affected me psychologically. See, a death sentence has you on a string — always telling you your means have no end. What I had was a childhood full of new challenges to overcome, leading to a deeper understanding of my disease. By the time I was able to do my own research on the statistics of Duchenne, I knew the end was nowhere in sight.

Today, at 23, I can still sit upright, pull my computer onto my lap and type out my story for you.

Sure I wasn’t dealt the best hand in the deck, but I’ve always been a glass-half-full kind of guy. Now, I’m never going to tell you that I love my disability or that I wouldn’t have it any other way. Believe me: If I could start over without Duchenne, I would. That doesn’t mean I haven’t learned some valuable lessons from my experience with the disease, though.

The biggest one I realized is that life isn’t about trying to prove anything to anyone.

That included trying to prove I didn’t need help. It was hard to ask for help in the early stages of Duchenne because I didn’t want to appear different. I felt embarrassed and helpless, especially if I’d just lost an ability I’d had a few months before.

Trying to accept that there might be a future where I needed help was even more difficult. I had convinced myself a cure would arrive before I left high school and took on any real responsibilities. However, as graduation crept closer, reality sunk in. I would have to find a way to survive as an adult with not only muscular dystrophy but a much more advanced muscular dystrophy than I knew as a child.

I was already one of those kids who tried to co 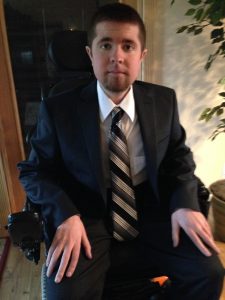 mpete for the highest GPA. Like many of my peers, I sprinkled my schedule with honors classes in the hopes it would get me into the best school so I could land the coolest, smartest-sounding job around.

All of the sudden, it wasn’t just about competition. Having the highest GPA felt like a necessity in order to compensate for my lack of physical ability. I spent a lot of time my senior year and my first few years of college obsessing over my grades.

Because I had been able to keep up in high school, I admittedly felt like one of the smarties at the start of college. I definitely believed I was the brainiac who ought to be pursuing an engineering physics degree. Unfortunately, it wasn’t long before I realized I was a 60 watt among 100s. (In fact, if I’m being completely honest here, I just had to look up a wattage chart to make sure I had that sentence right. Some engineer I would’ve been.)

Anyway, it finally dawned on me that I didn’t need extra brain power to make up for my disability. I could only do the best I could, and Duchenne couldn’t be held against me.

In case you’re wondering, no, I didn’t give up on that major. I completed it with a mediocre GPA, but as several of my friends reminded me that last semester, Cs really do get degrees.

So, whatever. I would never be the math whiz I thought I was in ninth-grade geometry (I still have trouble adding up the dice in Yahtzee). The one thing I still had, which was hiding behind the math for so long, was my writing. I had done a few internships writing online in the past, all the while saying, “When am I ever going to use this? I’m going to be an engineer.”

It’s funny how certain things seem to find a way back in your life. Still, the rediscovery took me a bit of time.

As a winter grad, my first few months post-college were pretty uneventful. I tried to stay active searching online for jobs, but I didn’t know what I was looking for anymore. With all that free time, I started a blog called Duchenne Talk. I took a big interest in raising awareness for Duchenne in college, so I figured why stop now?

After a few more months of the “job search” and a little more research (actually a lot more), I learned I could make a living blogging full time. Yes, it takes hard work, but the same goes for any other possible endeavor. Only 10 months post-graduation, I’m just now starting to really attack it, but I know I can turn this passion into a success.

And remember, too, not to let the thought of losing your benefits hold you back. There are a ton of resources out there to help. I’m no expert, so I won’t go into detail, but the point is: Don’t be afraid to take advantage. No need to prove you can make it without them.

There’s also no need to prove you’re genius enough to pursue the toughest career you can think of. I’m done trying to prove things to people, and I’m glad to have found my true calling.

Are you, or do you know, a young adult seeking employment resources? Send us your questions to youngadults@mdausa.org.