It was winter of last year and the goal was Stella Point on Mount Kilimanjaro — 18,884 feet into the heavens.

On the team there were marathoners and ultra-marathoners, mountain climbers and triathletes, and a girl who’d started bagging peaks at the tender age of three.

Then there was the woman who would end up inspiring them all — Nicki Hudson.

“And me, with muscular dystrophy,” Nicki says. “I find it hilarious.”

Nicki was diagnosed with Charcot-Marie-Tooth Disease, or CMT, when she was 12 years old.

CMT causes muscle weakness and affects how well nerves carry signals from the brain to the muscles.

Nicki always struggled with running and playing kickball during recess. Her ankles would roll and she had trouble with coordination, which frustrated her.

She had her first surgery the year she was diagnosed — doctors fused her ankle bones to help Nicki remain steady on her feet — and she’d end up having five more surgeries.

Her mom had CMT too, but the disease wasn’t something they’d talk about at the dinner table.

“It really impacted me a lot. My mom didn’t really ever deal with her muscular dystrophy in regards to coping with it,” Nicki says. “She was also a practicing alcoholic, so she shamed me about it. So I was real sha

meful for years and years about it and really felt different.”

Now, Nicki is no longer ashamed. She doesn’t want CMT to stop her from doing what she wants to do. She’s empowered, she’s motivated,and she’s a mom. Her daughter, Leah, is 7 years old and has also been diagnosed with CMT.

“I want to raise her knowing that she can do anything,” Nicki says.

That’s how Nicki found herself in Tanzania on an inky night on January 26, taking her first steps up the highest mountain in Africa — Mount Kilimanjaro.

Her ex-boyfriend had invited her and she’d said yes. Then the gym rat added more cycling and stair climbing to her already packed workout schedule. It was an opportunity she couldn’t pass up. Climbing Kilimanjaro was a chance to embody the values she wanted to pass onto her daughter — that nothing, not even muscular dystrophy, can stop her from reaching her goals.

“I don’t know how much of it is my innate personality, like I’m just that type of driven person,” Nicki says. “Or how much my muscular dystrophy is motivating me to not let it stop me and slow me down.”

Once she stepped foot on the trail, Nicki dug deep into that motivation. Though they had spent time there acclimating before the trek, the thin air made her feel sick and sleepy. She gasped for breath, desperate for oxygen. Her boyfriend at the time stayed by her side, cheering her on, and the guides brought her hot tea in a thermos to help her stay awake.

Partway up the dormant volcano, Nicki passed a woman sitting on the side of the trail, sobbing and spent.

“She was by the side of the trail crying and saying, ‘I can’t do it. I’m going to die.’ Because your mind tells you you can’t do it and that you’re going to die. You can’t breathe,” Nicki explains. “So, she was crying and I thought to myself — this is my thinking the whole time — ‘Don’t listen to her. Just keep going.'”

“I just kept focusing on each step. ‘Don’t look ahead at how far it is, or on the terrain, just focus on each step. Just keep going. Don’t give up.’ That’s what I kept telling myself the whole time.”

At 6:45 in the morning on January 27, Nicki stepped foot onto Stella Point. She had made it.

“The cool thing is, all those avid mountai 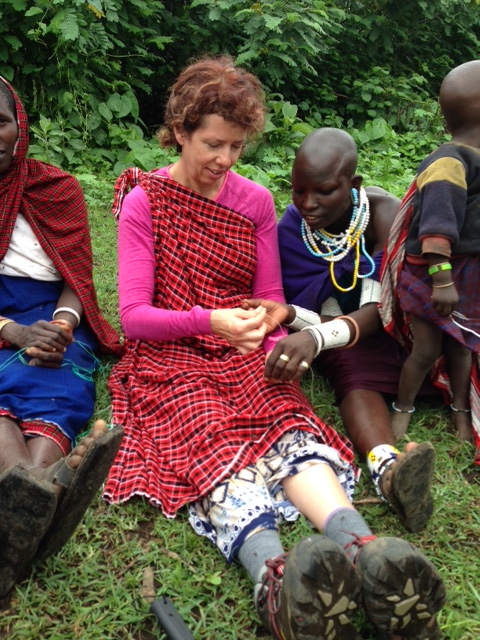 n climbers, they told me that I really inspired them and made them want to push harder,” Nicki says. “One of the girls on the trip, a marathoner, she said, ‘You know, I have no doubt you’ll make it to the top.’ Those things really made me feel good.”

After completing the trek, Nicki received a certificate of completion. She hung it in her hallway and sees it every time she walks out the door.

It reminds Nicki of how much she can accomplish when she puts one foot ahead of the other.

“Don’t give up. Push yourself to do as much as you can,” she says. “Don’t just write yourself off because you have muscular dystrophy. Let it be a motivator instead of a reason to not try.”

Help fund research for treatments and cures for CMT and all neuromuscular diseases.