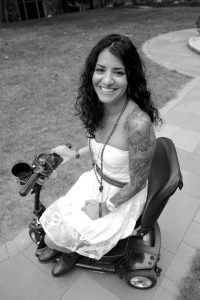 Bernadette Scarduzio doesn’t like secrets. Her life is an open book — in fact, now it’s a documentary.

But Bernadette and her struggles didn’t start out in the spotlight. Her disease was a secret.

Born with Charcot-Marie-Tooth Disease or CMT, an inherited disorder which impacts the nerves in the legs and arms, Bernadette was in the dark about what was happening to her body until she was diagnosed at 8 years old.

“The thing with me, with my family, is it was a hidden thing. No one wanted to talk about it and I didn’t have it severe enough at that age for them to have to really talk about it,” she says, explaining that she was treated like any other kid. “I always thought, ‘Why do my legs hurt, why am I the slowest runner, how come I can’t keep up with everybody else?’ I just always felt like I was one step behind.”

Bernadette’s father, John, and her brother also lived with CMT, along with cousins and distant relatives.

“I guess my dad and my mom — I think they felt ashamed. Like, if you said the name Charcot-Marie-Tooth Disease, people didn’t know it,” she says. “When people asked what’s wrong, we would say I had hip dysplasia. It’s just easier.”

But in 2011, Bernadette decided to go public with her disease in the biggest way possible, and her family was right behind her.

A friend of hers from New York, a filmmaker named Josh Taub, wanted to make a documentary about her.

“There’s something about you. I want to film you,'” she recalls him saying. “I was like, ‘Alright, I would love that.'”

That’s when the documentary “Bernadette” was born. That’s also when, as her father said, Bernadette became the face of CMT.

The filming was a wonderful experience, Bernadette says. But it was tinged with sadness.

Early on, after completing his first interview with the filmmaker, Bernadette’s father suffered a major heart attack and died. It was a massive blow to Bernadette, who was best friends with her father.

“He was my everything,” she says. “He was my rock. He was the go-to. Actually, a lot of people looked up to my father.”

A trailer for the film came out not long after his death, and the response was huge. People with CMT all over the world reached out to Bernadette. Through her grief, she kept filming.

“It kind of kept me going, having them film me. Because it gave me something to live for,” she says. “When my dad died, I said, ‘Now, I really want awareness.’ This film was dedicated to my father.” 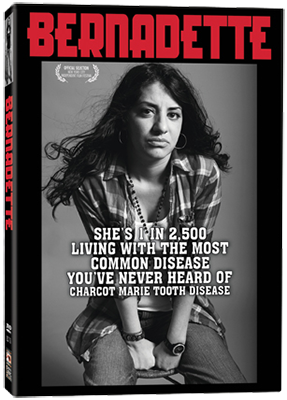 The film showed in New York, Los Angeles, Philadelphia and New Jersey. It sold out three times during its premiere in New York, Bernadette says.

“I’ve met people from all over the world, places I’ve never even heard of, that reach out to me still to this day. They find me on social media and they say, ‘I saw your trailer, or I googled CMT and I found you, and thank you for putting yourself out there,'” she says.

Bernadette is affected by CMT more severely than the rest of her family, including her father, who had 20 surgeries over his lifetime. Since the film came out, her disease has progressed. Her wrists are weaker and her fingers are stiffer. She experiences more numbness in her body. Bernadette uses a scooter full-time and has a physical therapist, occupational therapist and a caretaker.

But, as much as she struggles with CMT, she considers the disease a gift. It’s her mission in life, she says, to make CMT a household name. Bernadette aims to get involved with the MDA and go to events to raise awareness.

She’d shout about CMT from the rooftops if that would help people understand.

“My goal is to get this disease known worldwide,” she says. “I want people to be aware of it and I also want to help people who have it, so they don’t have to experience what I did, so they can live a more open life and feel more comfortable about having CMT.”