The deafening roar of thousands of motorcycles is music to Julie Harris’s ears. To her, that rumble means one thing: “Hope.”

This weekend, the Reading Fairgrounds in Eastern Pennsylvania will be filled with Julie’s favorite sounds. That’s because the 30th Annual MDA Ride for Life is speeding into town.

Those motorcycles herald hope for people like Julie’s son, Brandon, who was diagnosed with Duchenne muscular dystrophy (DMD) when he was 6 years old. Brandon’s dad, Bob, remembers it like it was yesterday.

“He was diagnosed February 21, 2006. Before that time he was just a normal little boy who had a little trouble running,” he says. “At first we were confused. We didn’t know a whole lot about the disease. You know, you grow up watching the Jerry Lewis Telethon. You hear of muscular dystrophy. But I didn’t really have much of an idea at that point until we came home and began researching.”

It didn’t take long for Julie and her family to find MDA.

“We kept seeing that a lot of research [on DMD] was done by MDA.” 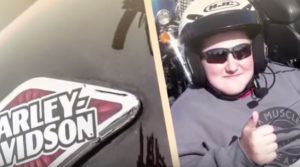 Around the same time, some neighbors who ride Harley-Davidson Co. motorcycles invited the family to a block party. Julie remembers, “We actually went down to volunteer. We didn’t know anything about it, we just said, ‘Ok, we’re going to help somebody else.'”
They were surprised to learn that the event would be benefitting their own family. That block party was also their first introduction to the long and proud relationship between MDA and Harley-Davidson.

Harley-Davidson has been helping MDA families like the Harrises since 1980. Of the more than 100 motorcycle rides benefiting MDA each year across the country, MDA Ride for Life is the largest. It all started when members of the Eastern Harley-Davidson Dealers Association joined forces to combine their separate fundraisers supporting MDA into one large event. Today, the beloved annual event, which takes place over a weekend in May in different venues throughout Pennsylvania, features its namesake motorcycle ride, a concert and a parade.

Since 1988, more than 50,000 riders have raised over $21 million for MDA through Ride for Life. The 2017 Ride for Life funds raised will also propel Harley-Davidson’s overall support for MDA and families affected to more than $100 million raised in 37 years of partnership.

For the Harris family, Ride for Life is a bright spot in the face of a devastating progressive disease. 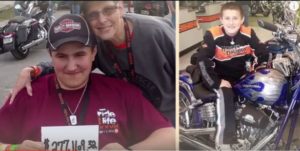 “When you think of someone with the challenges [Brandon has] it seems like a lot of heartache. This is the blessing. People are there helping families like ours. For all of the negative that happens in this world, to know that there’s something good going on warms my heart and I’m proud to be an advocate for the Ride for Life because it means so much to so many.”
The money the Ride has raised for families like the Harrises has helped usher in a new age of treatments for diseases in MDA’s program, including DMD. Exondys 51, approved by the FDA in 2016 for treatment of DMD, can trace its genesis to the fundraising efforts of Harley riders – and could be a viable treatment for Brandon.

That’s something Bob Harris takes to heart. Speaking of Brandon and the Ride’s impact, he says “Here’s a little boy who’s going to have a longer life and hopefully get to improve on things that he’s doing now. The riders made a difference. It’s an exciting time.” 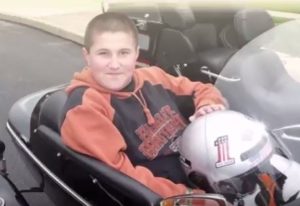 As for Brandon, who will be there this weekend as he has for many years, he is optimistic about the hope those Harleys have brought to his family.

“Hopefully one day, I know this doesn’t sound good, but hopefully we don’t have to have these events anymore. But instead, everybody will still come together to kind of celebrate our accomplishments of finding a cure.”

For people on the fence about attending, Brandon has this encouragement: “It’s for a good cause. That’s what I’ll say until we don’t have to say it anymore.”