From April 16 to 20, we’re celebrating National Volunteer Week! We’re so thankful for our MDA volunteers who give of their time and talents to help families with muscular dystrophy, ALS and related diseases. If you’re an MDA volunteer, consider this your virtual hug from us! If you’d like to become a volunteer, we’d love to meet you.

Each day this week we’ll be sharing the story of one of our amazing volunteers. Today, meet Ches Hutchinson— a devoted MDA Summer Camp and MDA Team Momentum volunteer.

In 2011, a coworker whose son attended the Minnesota MDA Summer Camp reached out to Ches. The camp was in need of volunteers — specifically men — and Ches’ little brother had just graduated from high school. Might he be interested, Ches’ coworker asked? 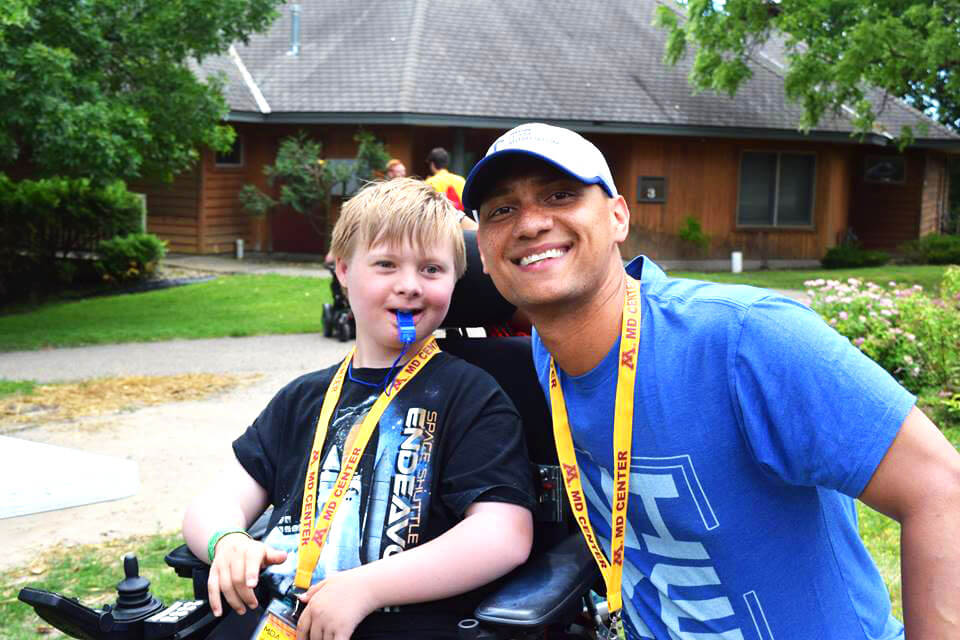 Ches’ brother had gotten a job and wasn’t available. But Ches could be.

That day his coworker called, Ches was headed to a softball game. He had a long walk from his bus drop-off to the softball field, and he turned the idea of volunteering over in his mind as he walked. He had no experience as a camp counselor; he’d never been to camp as a kid himself. He’d just started dating a woman; would she support the idea? (She would.)

Maybe he’d be really bad at it, he thought.

“And then I thought, you know, I’m just going to call to see if they need help,” Ches says. “So I called and said if you still need somebody, I’m free. It started as a spur-of-the-moment thing, and the rest is history, I guess.”

That history now includes seven summers at Minnesota’s MDA Summer Camp at True Friends Conference & Retreat Center, where, as a cabin leader, he connects with not only the individual campers paired with him each year but also all the kids in his designated cabins.

“As a camp volunteer I bond as much as I can with my own camper,” Ches says, “but I also get to know every kid in my cabin. I find out what their interests are and make sure they’re having a good time. A dozen kids aren’t going to be exactly into the same things.”

Luckily, camp has plenty of activity options. The zip line is a perennial favorite, Ches says, along with riding in a pontoon boat on the camp lake and fishing from the lake’s dock.

“There’s a wide variety of activities offered, and kids get to experience as many as possible,” Ches says.

MDA has a wide variety of activities for volunteers, too. In addition to helping out at Summer Camp, Ches has served as a volunteer ambassador, or Shambassador, during MDA Shamrocks season and, since 2015, has run marathons with MDA Team Momentum. 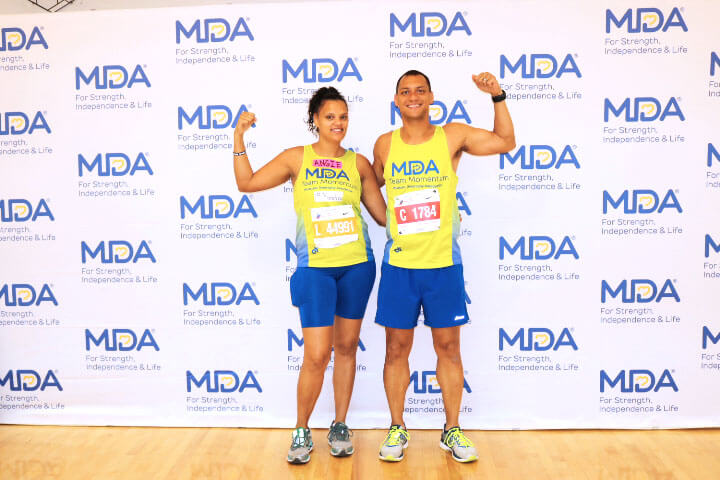 “Team Momentum changed my life,” Ches says. “In 2015 I was not necessarily overweight, but I was the heaviest I had ever been in my life. I had just started to run, and one of these local emails came —  a cool opportunity with MDA Team Momentum.”

Running a marathon was something else Ches had never done. He could run three miles, but 26?

So he did. He got his weight down, he and his wife and team raised $10,000, and Ches found a new community. In Team Momentum’s Facebook group, he gets support for his own training and gets to be there in return for MDA families living with neuromuscular disease.

“The Facebook group has a lot of parents who don’t just post about running,” Ches says. “You get to see the parents’ perspectives, the day-to-day life … how muscle disease impacts folks. It’s not just ‘Hey, how’s your running?’ but, ‘Hey, how’s your family doing?’”

After all, the families are the reason Ches keeps answering every MDA volunteer call.

“It’s what’s the hardest part about it, but it also grabs you emotionally,” he says. “These diseases impact children. You see these kids that are so young, and when you’re talking to other campers and you hear about an awesome kid who’s not doing well, it hurts. These kids have this amazing spirit. I have so much fun with them. It makes you want to do more.”

Whether volunteers are able to donate a week of time to Summer Camp or just a day for a run or Muscle Walk, Ches says they won’t regret it.

“If you can just do one day,” he says, “you’ll get to meet some of the families and some of the MDA staff and you’ll be touched by the passion people have for the organization. You’ll be impacted and fall in love with the kids. You won’t have any regrets, and you’ll have a good time in the process.”

How Parents Can Help Kids Prepare for Adult Life