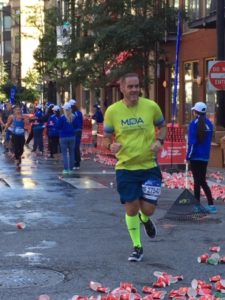 rattles off the marathons that he has completed for Team Momentum, the endurance running program for people of all abilities who want to dedicate their miles to helping kids and adul
ts with muscular dystrophy live longer and grow stronger: “Chicago 2014, 2015, 2016 and now 2017. I ran Dallas with Team Momentum and also New York City.”

But completing six marathons is not Pat’s biggest accomplishment: He has been the top single fundraiser for MDA at the Chicago Marathon since Team Momentum’s inception in 2014. Pat’s fundraising strategy is simple: tell potential donors about his son Finley.

Finley, now 6 years old, was diagnosed with nemaline myopathy at two months old. “He came out and everything seemed fine. But about four hours in, he turned purple. It was because he wasn’t swallowing properly and aspirating everything,” Pat says. In the weeks that followed, there was “a lot of testing, a lot of scary nights.” 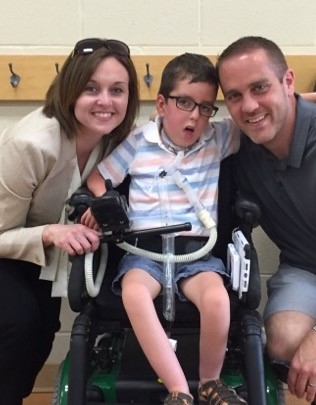 Finley’s doctor pointed Pat and his wife Kate to MDA as the best source of information about their son’s disorder. “We went to MDA Care Centers and met with MDA representatives,” Pat says. “It took me quite a bit longer to accept what was going on — to accept that this was not a cold, it’s not the flu. It’s going to be something we need to work on forever.”

And Finley works hard. “We weren’t always sure that Finley was going to talk. One of the main parts of his disease is weakness through the lower face and vocal chords in the trunk area,” Pat says. And now?

“You can’t say a word because he just will not stop talking. It’s one of the great joys to be able to hear him talk,” Pat says. “The little steps that you get, the small victories become much bigger.”

Pat and his family made the decision to move from their two story house and built an accessible home for Finley, who uses a wheelchair. They moved into a rental while their new home was completed. “I was moving stuff from the sold house to the rental house, and an email from MDA came through about running the Chicago Marathon. I just deleted it. Because I’m not going to run a marathon. That’s crazy.” 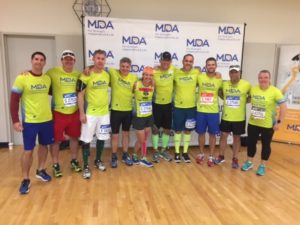 But with some convincing from his wife, he decided to sign up. “I wouldn’t say I’m a wonderfully athletic person or gifted in that way, but I was always involved in sports. I never liked running, but I’ve learned to love it now,” Pat says.

His team, Finn’s Fighters, consists of friends and friends of friends inspired by Finley to raise money for MDA’s life-changing programs and research. Finn’s Fighters raised over $35,000 at last year’s Chicago Marathon, and Pat hopes to best that this year. “We’ve got so many pharmaceutical therapies being approved. It’s great to be able to tell people that their dollars are making a difference.” 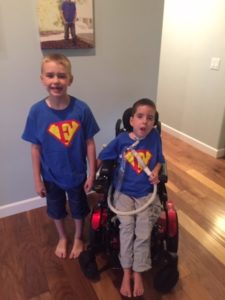 Pat now gets up before 5:00 a.m. two to three times per week with his running partner, Jerry Kitter, who’s also a part of Finn’s Fighters. “The longer the run, the better,” Pat says.

Finley and his older brother Max can’t wait to join their dad and train with Team Momentum. “My time with Team Momentum — I love it. It’s an all-year event for me,” Pat says. “The people you meet, the families you meet, the staff at the MDA — it’s all incredible. It’s the most inspiring thing I’ve ever been a part of. I explained to my wife after the first time I ran the Chicago Marathon that I feel like I have this cup of good feelings in my life, and that weekend, it overflows.”

Join Finn’s Fighters and Team Momentum by dedicating your miles to helping kids like Finley live longer and grow stronger!