Melanie Carson has peered into the Grand Canyon and craned her neck looking up at the giant Redwoods of Northern California. She’s felt the mist of waterfalls in Hawaii and gazed at Yosemite’s Half Dome. 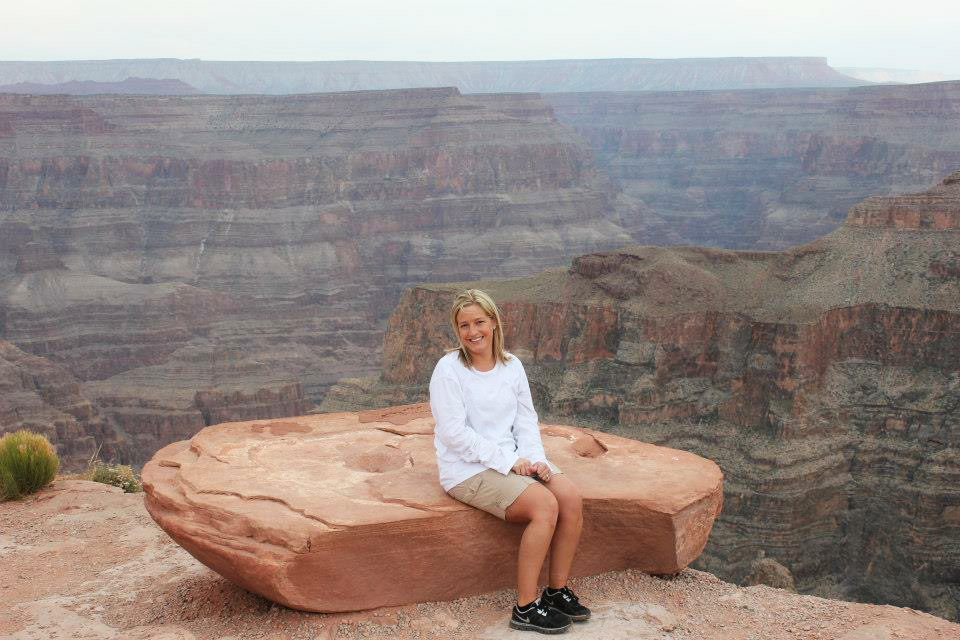 “My main symptoms were that I was just really, really fatigued all the time,” she says. “I just didn’t feel well. I was in pain a lot of the time.”

She discovered that she couldn’t raise herself onto her toes — a classic sign of Miyoshi myopathy — her ankles were weak, and her feet always hurt.

Over the next 10 years, she was diagnosed with everything under the sun — except Miyoshi myopathy. Melanie saw doctor after doctor and took drug after drug. She got foot surgery that she didn’t need. No diagnosis seemed to fit quite right, and no treatment seemed to be working. In fact, some treatments made her condition worse when they were supposed to make it better. 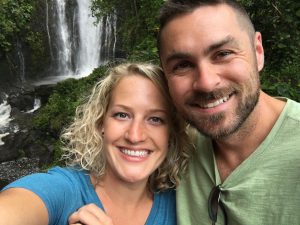 The call came a week before her birthday. Melanie vividly remembers answering her phone while standing outside a shoe store, where she was about to spend cash she got as a birthday present.

As she listened to what the doctors were saying, she looked into the shop’s window. Staring back at her was a display full of high heels that she knew she couldn’t wear now and, considering the caller’s news, she realized she had no chance of ever wearing.

She was disappointed, sad and scared, but there was something else too.

“I remember standing there and I was not happy, but I was relieved, because at least now I could put a name to something, put a name to all the issues I was having,” she says.

Melanie was also determined to do something about it.

“Instead of sitting there and wallowing and feeling bad about myself,” she says, “why not go out there?”

So, she started an MDA Muscle Walk team.

One of Melanie’s friends came up with the team’s name — Melanie’s Indomitable Will. It suits her perfectly.

That first year, in 2013, Melanie and her Indomitable Will raised nearly $4,000 with the Rhode Island Muscle Walk. 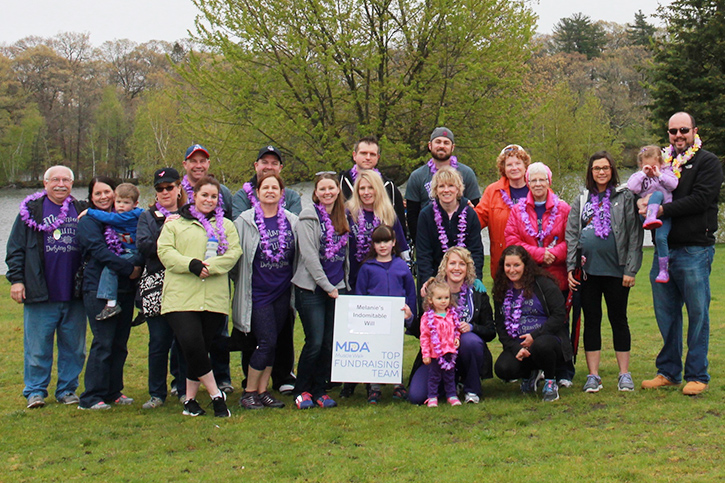 “I actually felt that maybe this will help me, too, but I started feeling passionate about raising money for all the other people who had it much worse than me,” she says, explaining that while she’s still walking and her heart works fine, others with muscular dystrophy are not in the same position. “In a sense, if I was going to have muscular dystrophy, I got lucky.”

Lucky or not, the progression of disease is different for everyone. She’s already having trouble getting around, and she knows she might not have much more time to walk to the edge of the Grand Canyon or stand on her own two feet under a Hawaiian waterfall. Or even walk on her own in the Muscle Walk.

“After I finally got the diagnosis and I knew that there was no chance it was a misdiagnosis, which is kind of hard to do when you’re looking into DNA,” she says, “I started to realize what was going to happen and what could happen and what might not but probably will happen. I decided that I’ve been kind of living my life being scared.”

She decided to change that. Not long after her diagnosis, she visited Niagara Falls with her husband and then went sky diving.

“I would absolutely go back,” she says of jumping out of a plane. “It was so much fun.”

Melanie is living unlimited and she’s loving it. 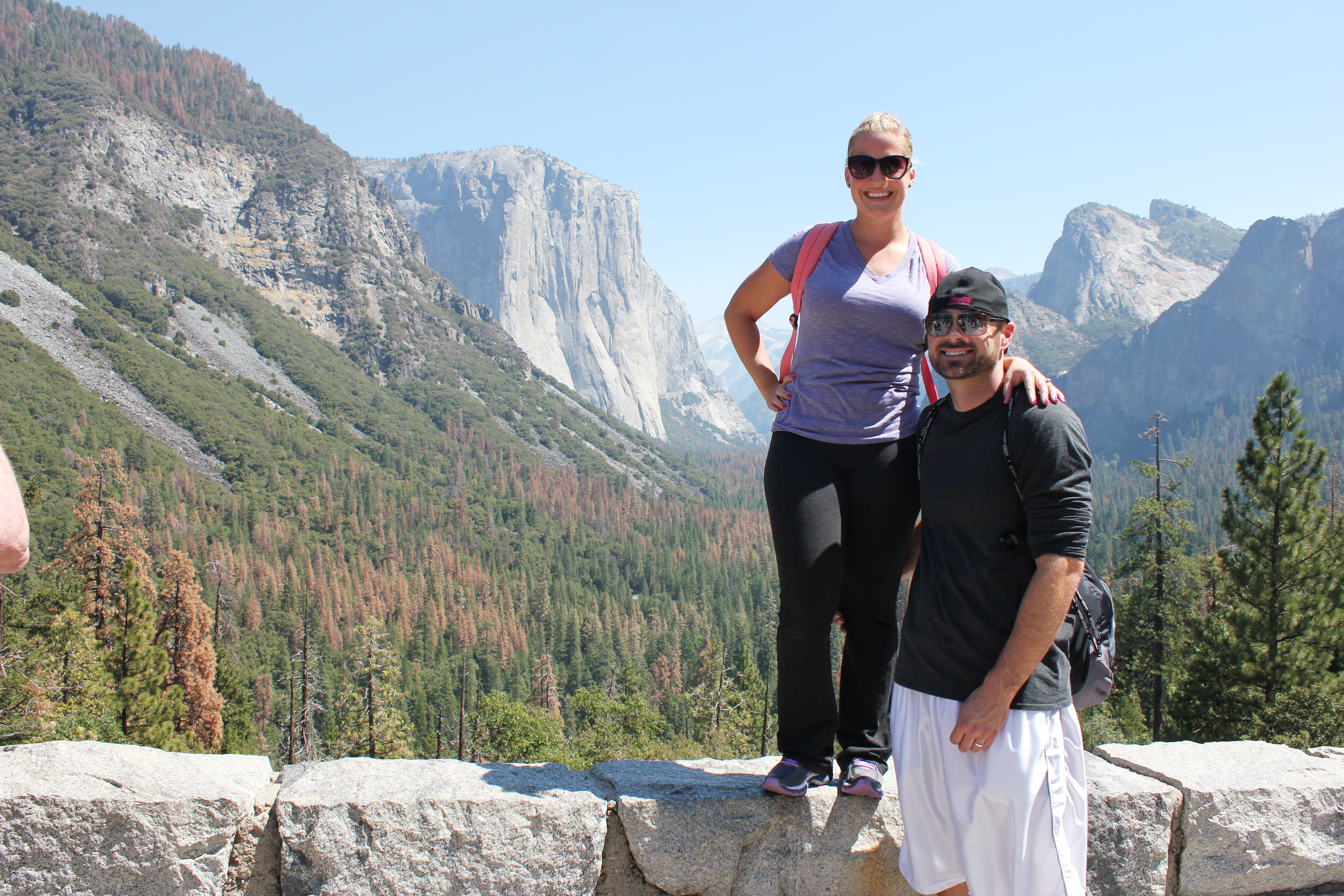 “The way that I feel like I live unlimited is honestly, in general, I don’t use my Miyoshi myopathy as an excuse to not do anything anymore,” Melanie says, explaining that she also works full-time. “I don’t use how I feel or my inability to do something to not achieve something.”

Next on her bucket list are visiting Utah and traveling to Australia and New Zealand. With her indomitable will, she’s sure to make it happen.

“I don’t want to be held back from anything,” Melanie says.

Want to join in the MDA Muscle Walk fun this fall?

Find a Muscle Walk Near You

People May Not Accept Your Disability. You Don’t Have to Accept That.