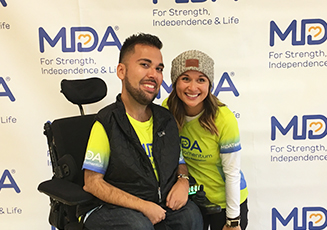 “What would you do if you weren’t disabled?”

Yep — that’s the hard-hitting question everyone and their mother wants to know. Can you say, #cliché? Truthfully, at this point, anyone who’s anyone knows I would twerk. And that’s what I’ve started telling people. But when most people ask, “twerking” isn’t generally the answer they’re hoping for. As someone who’s been asked this too many times to count in my life, I’ve figured out that people expect me to say I want to be able to run — that I DREAM of being able to run.

I don’t dream of running. And I especially don’t dream of running 26.2 miles at one time. That’s not to say I don’t, from time to time, wish that my muscles worked better. And thanks to a group of about 260 legitimately crazy individuals who decided run the Bank of America Chicago Marathon on Oct. 9, my muscles are one step closer to being able to do just that.

If you haven’t heard about the MDA Team Momentum program yet, let me catch you up.

Our Team Momentum Program is designed to let individuals who enjoy running in major races and marathons participate in fundraising on an individual basis. MDA has partnered with several races around the country to allow those who want to race on behalf of MDA Team Momentum to fundraise to bring strength to life for people like me. This program is fairly new, but I think it has major potential to become an integral part of our fundraising network. 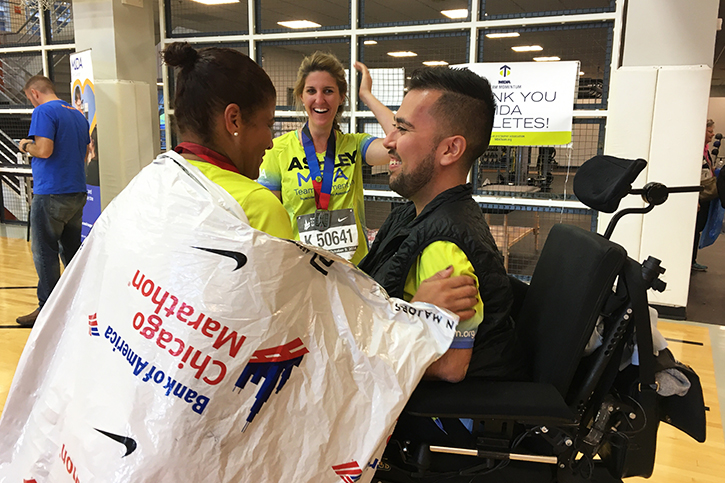 The Bank of America Chicago Marathon was the first MDA Team Momentum event I’d attended. I have a lot of family in Chicago, so I frequent the city often. However, playing the role of a bystander at the Chicago Marathon, cheering on our Team Momentum runners, was an inspiring experience I will never forget.

The night before the race I had the honor to speak at the Inspiration Dinner that MDA hosted for our runners. And yes, rest assured, it was definitely a carbo-load — plenty of pasta and bread to satisfy any gluten fiend for weeks. But, if you can believe it, that wasn’t what made the night so special. At dinner, several runners and teammates got on stage to share their reasons for running. It seemed like everyone in the room had a special connection to MDA. Some were running in honor of a sibling with DMD, others for a friend with SMA. One man who stood out to me most was Chris Benyo.

Chris had initially planned to push his wife, Denise, in her push chair in front of him as they tackled the marathon together, which they’d done many times before. Denise, who had been living with ALS for several years, passed away this year as a result of the disease. At dinner, Chris gave a powerful speech about how much MDA had supported him and his wife on their journey with ALS. He decided to run in the Bank of America Chicago Marathon in her honor while pushing her now empty push chair in her memory.

Chris’s story, and those of the other runners who spoke and whom I met that night, were what made this event so memorable for me. The room was filled with so much passion and positive energy as the team prepared to take to the streets of the Windy City the next morning. It was truly inspiring to see so many ambitious people using their muscles to strengthen those of kids and adults with muscle-debilitating diseases. We even had 95 first-time marathoners join the team this year! How neat is that? 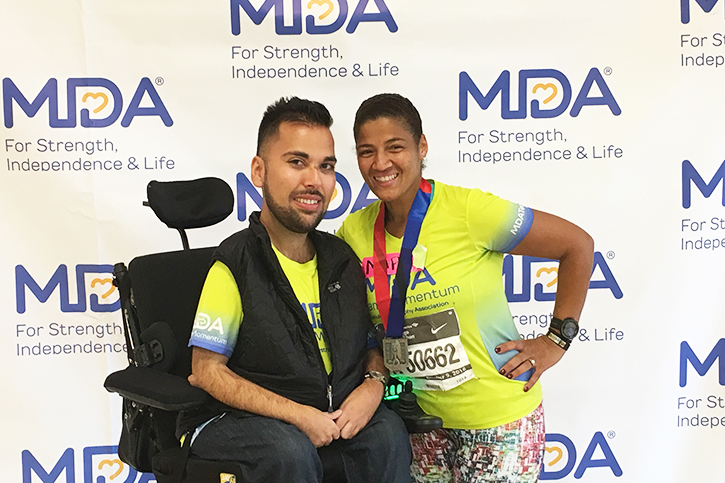 I guess you could say that even for someone like me, who probably would never choose to run 26.2 miles even if my legs did work properly, attending the Chicago marathon was one of the most rewarding experiences I’ve had since becoming MDA’s National Ambassador.

I absolutely encourage all of you to consider joining MDA’s Team Momentum.

Whether you’re looking for a way get back into shape after the holiday season or you’re trying to find a New Year’s resolution that will push you to the next level, there’s never been a better time to join. Please go to mdateam.org for more information on Team Momentum and to find a race near you happening soon. I promise, you won’t regret it!

Learn more about how you can make a difference with MDA Team Momentum!

Connecting With Our Young Adults

Help and Hope for Friedreich’s Ataxia