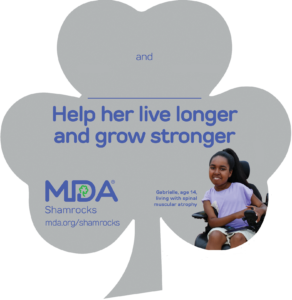 Fourteen-year-old Kentucky native Gabrielle’s favorite subject is geography, which is appropriate when you have an insatiable desire to travel.

Gabrielle, who has spinal muscular atrophy (SMA) Type 2, has already seen a great deal of the world, including Europe, the Caribbean and the western United States.

This year, Gabrielle is featured as a “Shamrockstar” on a platinum custom MDA Shamrock at retailers across the country, a country that Gabrielle has seen extensively in her travels with her family.

These trips have enabled her to experience many different cultures and landscapes. Being in a wheelchair has provided the occasional challenge, but Gabrielle and her family have learned how to be creative in dealing with logistical difficulties.

For example, on a recent trip to Europe, they discovered that not all of the cities are wheelchair friendly, given the age of the buildings and infrastructure. “In Vienna, we were fortunate to travel with a tour,” recalls her mother, Aurlisa. “Some of the guys adopted us and carried Gabrielle and her wheelchair up and down castle stairs and streets with steep inclines.”

These family trips take on added significance considering the prognosis Gabrielle was given when first diagnosed.

“We Never Went Back”

Gabrielle’s SMA journey begins when she was just a baby. “Around six months, I noticed she had been raising her head up, on target, but she stopped doing that,” recalls Aurlisa. “She also wasn’t rolling over that much.”

Aurlisa took her to the pediatrician, who was not overly concerned, telling her to monitor her progress over the next three to six months. However, there would be no improvement.

Growing concerned, Aurlisa pushed to have a battery of tests done at nine months instead of waiting until Gabrielle’s first birthday. She took her to a variety of specialists, and, three months later, Gabrielle was formally diagnosed with SMA Type 2.

Aurlisa remembers the shock of the diagnosis, but she remembers even more vividly the response of the neurologist.

“We never went back to that doctor again.”

Soon after, Aurlisa began taking Gabrielle to the MDA Care Center in Louisville, where Gabrielle has been receiving her treatment ever since.

From Care Center to Camp to Kroger

Seven trips to Disney World later, Gabrielle is now a high school student in Louisville, pursuing her passion for singing.

Gabrielle recently enjoyed her first MDA Summer Camp and is already looking forward to going this year. Last year she attended camp for the first time, and this year will be going to camp in Antioch, Tenn., outside of Nashville.

For Gabrielle, attending summer camp is as exciting as a cruise or trip to another continent. “She loved the horseback riding, being able to form relationships with counselors, making new friends,” says Aurlisa. “This year they are going to have zip-lining. I told her ‘I don’t want to know.'”

As an ambassador for MDA, Gabrielle has been able to visit many sponsors of the MDA Shamrocks campaign, and, just as importantly, showcase her singing talents. “It is exciting for both parties,” says Aurlisa. “They get to see someone they are helping, and Gabrielle makes it real for them, the impact they are making. For us, we get a chance to say thank you.”

So far, Gabrielle and family have visited several Kroger locations, a company that has been a staunch supporter of MDA Shamrocks. They have also visited White Castle and Drybar, a well-known salon in Louisville.

Gabrielle is excited for the opportunity. “With Shamrock season coming, we are excited to be on it, to be able to go, talk to folks and show that she’s on there,” says Aurlisa.

In addition to providing the opportunity to send local kids to MDA Summer Camp, Shamrocks go a long way towards funding critical care that helps improve the quality of life for kids like Gabrielle.

“The support matters,” says Aurlisa. “When [someone invests] in that Shamrock, they invest in kids’ abilities, even if for a week, to have a sense of freedom, independence, and peace for their families, who get a break.

“MDA is everything. It’s not just the care center and the camp, it’s knowing there’s a place I can go, even if I have a question or am encountering something new.”

MDA Recognizes the Esteemed Members of Our Volunteer Advisory Committee