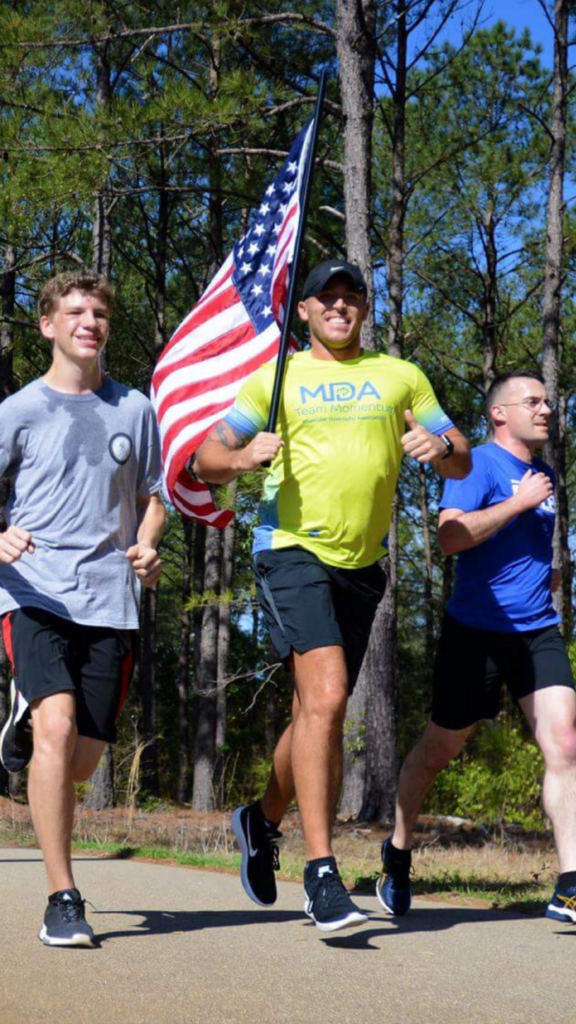 The unspoken requirement for MDA’s Team Momentum seems to be the driving force behind its success.

It’s not being the fastest, strongest or most experienced runner on the course.

To put it quite simply, this unspoken requirement is passion.

Since the program began fewer than four years ago, Team Momentum has found its greatest victories are accomplished by its dedicated team members, all of whom are devoted to finding treatments and cures for neuromuscular diseases.

Take for example, the seven Team Momentum athletes who participated in the 2017 Boston Marathon. These runners rallied together for a cause more powerful than anything standing in their way and in the process raised more than $50,000 to help MDA families live longer and grow stronger.

While all Team Momentum athletes run to find treatments and cures, Air Force Senior Airman Mike Hall, 20th Aerospace Medicine Squadron flight and operation medical technician, ran with two very special people in mind: his 27-year-old sister Danielle who lives with SMA, and his late brother DJ, who lived with the disease and passed away when he was just 19 months old.

Finding treatments and cures for neuromuscular disease has always been near and dear to Mike’s heart; however, running marathons to raise funds for research was a fairly recent development.

“Last year around July, Danielle was in the hospital, and before going into surgery she said, ‘Mike, if I wasn’t sick and could walk, I would run a marathon with you.’ At that moment I knew that one day, I was going to show her how much that meant to me,” shares Mike.

A few months later Mike did just that by taking part in the Marine Corps Marathon. During the race Mike shared his story with a fellow runner, who in turn shared it with Team Momentum. Moved by his story, Team Momentum reached out to Mike and offered him a coveted position to run with them in the Boston Marathon.

“What better way of supporting this cause than by running the most prestigious marathon in the world? I’m fulfilling my dream, while also supporting a cause that is very close to my heart,” says Mike.

Mike admits that the race was challenging, but it was his family who gave him the strength necessary to finish strong.

“My sister and family were at mile 24 and seeing them so close to the finish line it just gave me the extra push I needed to run the last couple miles hard,” shares Mike.

He also shares that finishing the race was an experience unlike any other.

“As I came to the finish line I started to become very emotional. Everything just kind of hit me. I thought about my sister Danielle and how she inspires me with her will to live. I thought about my brother DJ being with me every step of the way. I was running for something so much bigger than myself. This was for all of those who suffer from muscular dystrophy, ALS and all neuromuscular diseases. As I crossed the finish line I pointed up to the sky and told my brother I loved him.”

And it’s this passion that truly has the power to impact others.