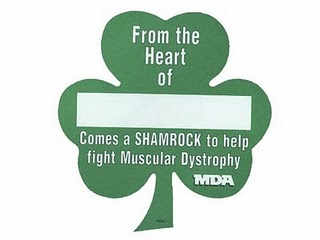 MDA’s iconic paper Shamrocks are synonymous with St. Patrick’s Day for millions of Americans who purchase the symbols of good luck at retailers nationwide to help MDA families live longer and grow stronger.

But how did this annual tradition get started?

To get to the bottom of this mystery, we sought out the woman who started it all, Molly O’Toole Karnitz Parker, who gladly accepted our invitation to take a stroll down memory lane.

Inspiration in a pub

It may be a behemoth program today, but MDA Shamrocks started out small. Its roots trace back to the Southwest Michigan field office in Grand Rapids, Mich., where Molly served as district director in the early 1980s. And even though today, many customers buy their Shamrocks at retailer check-out counters, they got their start in an altogether different place.

In early March 1983, Molly was celebrating her Irish heritage – how else? – by enjoying a drink at her favorite local watering hole, Flanagan’s.

“The bar was decorated with plain, green paper shamrocks,” Molly recalls. “They were everywhere: hanging from the ceiling and taped to the walls. That is where the idea came to me. I thought to myself, ‘If we printed Shamrocks with an MDA logo and message, they could be sold at local bars to benefit our families.’”

Molly took a souvenir from that night of inspiration: a shamrock she “borrowed” from the bar as a sample for the printer. Would it be feasible to print the pinups on a large scale, she wondered. At the local print shop, Molly got some good news.

“I was very surprised that, not only could they print and die cut the shamrocks, it was fairly inexpensive to do,” she says.

She had an idea. She had the printer’s assurances. Now she just needed a plan to get the Shamrocks to the bars.

“There are thousands of bars in Western Michigan. Packet distribution would be very difficult, time consuming and expensive, if we had to get them to bars on our own,” Molly recalls thinking.

Once again, beer was the answer.

Distributors to the rescue

At the time, Molly explains, Anheuser Busch was one of MDA’s largest national sponsors. The distributors were already delivering their product to the places she wanted to reach. Maybe some Shamrocks could hitch a ride with the kegs?

“Once we determined that we could afford to run a small batch of sample Shamrocks, I contacted my largest distributor to set up a meeting,” Molly says.

After she explained the program, showed him a sample packet and pointed out the benefits for everyone, he agreed – and invited Molly to pitch the idea at the next gathering of all Anheuser Busch distributors in Western Michigan.

Needless to say, the distributors loved the idea.

“All they had to do was provide MDA with the number of bars they serviced in their distribution area, and then we provided them that many information packets for the truck drivers to drop off to every bar in their territory. The packet contained one sample Shamrock, a one page information sheet, an order form and a return envelope,” Molly says.

We were so excited when the orders started coming in that January — and anxious because we were going to have to order all of those Shamrocks, thousands of them, and not know if any of them would be sold,” she says.

The early feedback was great. Truck drivers were reporting to Molly that bar owners were enthusiastic about the program. But she had to see for herself.

It was the first week of March 1984, and Molly had been too busy mailing out Shamrocks to spend much time in the places that were selling them. She had sent out “huge numbers of Shamrocks,” but she worried the boxes would end up in storage rooms and never get sold.

Amidst these worries, she found herself in a small town in southwest Michigan working an MDA event when she saw a bar whose name she recognized from its order.

“After getting up my nerve and thinking the worst, I opened the door and walked in to this dark cavern,” Molly remembers. “It took a minute for my eyes to adjust but when they did I found myself in the middle of bar that was absolutely filled with Shamrocks. I just stood there with chills and tears streaming down my face. I knew that we had a winner — I knew that we were going to make a difference.”

That first year, the program raised $40,000. “We were ecstatic,” Molly says. She was also ambitious. “Once the numbers were in, I used the back of a Shamrock, wrote out the details of the program and sent it to MDA’s National Office. After that, it’s history. They contacted Anheuser Busch corporate and worked out a program for all distributors.”

It’s one thing to have a successful pilot program. It’s another entirely to have a national fundraising campaign that sets the standard for all other pinup programs. MDA Shamrocks evolved into the latter because of a confluence of factors, Molly believes.

“We sold them in bars, which have lots of people coming in and out on a daily basis. We had the right message. We gave bar owners free decorations for their biggest night of the year (after New Year’s Eve) and the opportunity to do good and help others. And we let patrons make a small contribution that — with others — became a huge gift to people helped by MDA.

“The stars just all aligned,” she says.

Though there is no definitive answer on whether MDA Shamrocks were the first pinups – a staple of many charities’ fundraising strategies today – but they are certainly among the first. And, according to the program’s inventor, they are the best, too.

Reflecting on the legacy of her idea, Molly says she’s thrilled that other organizations have adopted the model.

“I am extremely proud every time I see a pinup that provides help to a non-profit. I always buy other charities’ pinups. There are so many good causes,” Molly says. “I do know, for certain, that MDA will always be the most successful program — we have the St Patrick’s Day advantage.”

These days, Molly is enjoying retirement in Florida, still frequenting local watering holes and still deeply connected to MDA through friendships and memories. So what’s it like to see Shamrocks today?

“I worked as a patient services coordinator for many years and had personally met families living with Duchenne, ALS and SMA and know that the millions of dollars raised by this one simple idea gives these families hope — when sometimes that’s all they have to hang onto.  I never pass up an opportunity to buy a Shamrock and always think that the luck of the Irish was with me when that idea popped into my head.”

Help find treatments and cures for adults and kids living with muscular dystrophy and related life-threatening diseases with MDA Shamrocks!

Find MDA Shamrocks Near You