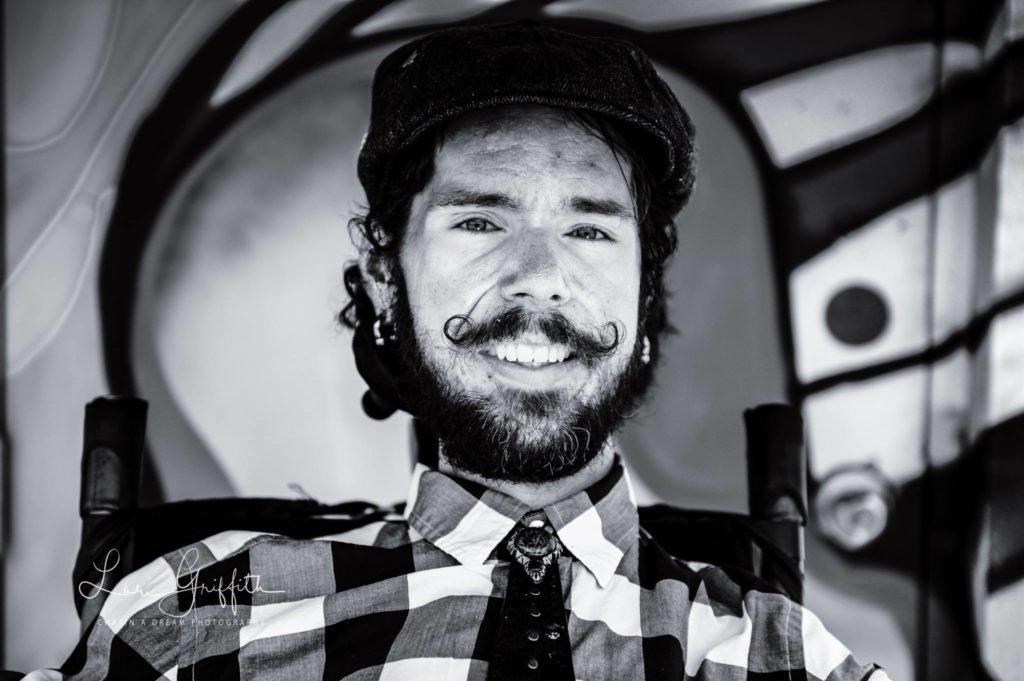 All his life, AJ Brockman has seen opportunity where others see obstacles.

The 29-year-old South Florida native’s creativity and imagination have helped him move beyond physical limitations to establish a successful career as a digital artist. Using cutting-edge technology and his left index finger, Brockman has painted portraits that have won numerous awards and has gained a wide following, including the admiration of a former president.

Brockman, who has spinal muscular atrophy (SMA) type II, has always dealt with declining muscle strength. However, as he puts it, SMA is only one part of who he is. Although his muscle weakness has been consistent, he has learned to adapt to his body, become comfortable with change and see the world in a different light. This outlook has enabled him to think big and find success in unique ways.

In the last two years, Brockman’s penchant for converting vision to reality has helped in another way: as a gallery owner. In 2014, Brockman opened The Brewhouse Gallery in Lake Park, Fla. —part artist’s co-op, part beer oasis. In doing so, he has helped to spark a neighborhood revitalization.

A wheelchair user since age 2, Brockman became involved with MDA at a young age, participating in the local Labor Day telethon for several years. In addition to 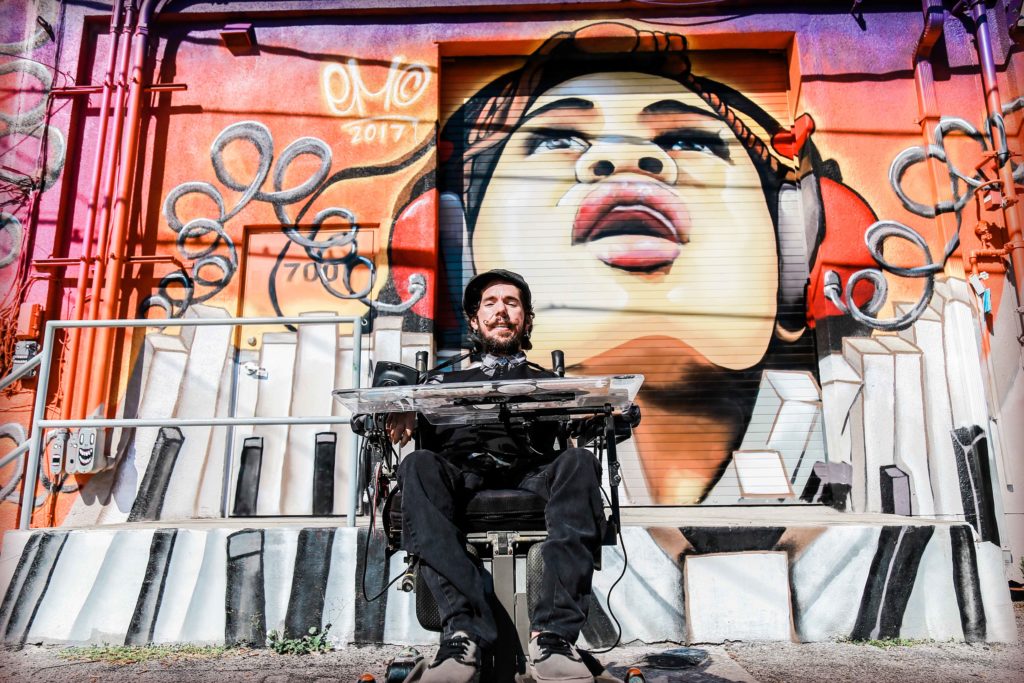 being in front of the cameras, he significantly impacted MDA in other ways as well. “As a kid, I was the Florida state goodwill ambassador and helped to get a proclamation signed that recognized the efforts of our firefighters in raising money for MDA,” Brockman says.

During his childhood, Brockman developed a passion for art. “I used to paint with acrylics,” he recalls. “At the time, I had use of my hands, but eventually they got too weak, and I had to give up painting. That’s when I started to think about other careers.” He briefly considered pursuing a career in television production, an interest cultivated from his time participating in the MDA telethons.

However, his passion for art was rekindled when he took a class in high school called Commercial Art Technology, a graphic design class that enabled him to explore art digitally, instead of with paintbrushes. “The class helped open my eyes to the possibilities of how digital technology could help to create art,” Brockman says. “It was something I could do and it only required moving a computer mouse.”

Armed with newfound artistic possibilities, Brockman flourished, and after graduating from high school, he enrolled in Digital Media Arts College in Boca Raton, where he graduated at the top of his class with a Bachelor of Fine Arts degree.

Getting noticed by the president

After graduation, Brockman initially started out in the corporate world as a graphic designer and commercial artist, but his desire to make his own art, on his terms, ultimately won out. “I burned out after awhile,” he says. “I wanted to explore my own ideas and didn’t find creating art for other people to be fulfilling.” 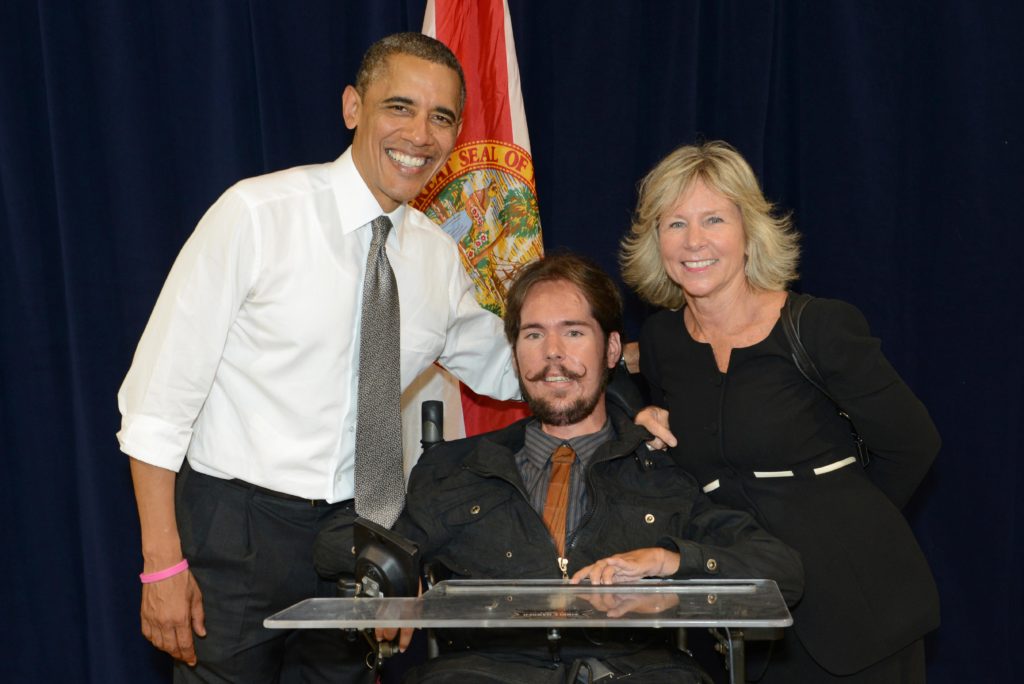 Although he knew the risks inherent in being a solo artist, Brockman decided to venture out on his own, opening Single Handed Studio, where he creates paintings and designs ranging from portraits to landscapes, and everything in between, using just the index finger on his left hand.

His art technique, according to his website, is a combination of both impressionism and realism. After visualizing the work he wants to paint, he then draws it with painstaking precision on a computer using Corel Painter and Adobe Photoshop programs. It is a process that takes hours, sometimes even days.

Or, in the case of a portrait of the former first family, six months.

In 2012, Brockman painted a portrait of President Barack Obama and his family, with the ultimate goal of finding a way to present it to the president. That September, he would get the chance, after President Obama stopped in South Florida on a campaign stop. At a reception after the rally, Brockman presented Obama with the painting, which greatly impressed the commander-in-chief. “He was blown away by it,” Brockman recalls. “He signed a copy of the painting and gave it to me. The original actually hung in the White House for a time.”

Since his encounter with the president, Brockman’s career has continued to progress. With the support of his mother, Jo, and brother Skip, AJ has been able to fulfill his dreams and make a name for himself in a career he loves. “My mom and brother have been instrumental in encouraging me to follow my dreams and supporting me in my career,” he says. 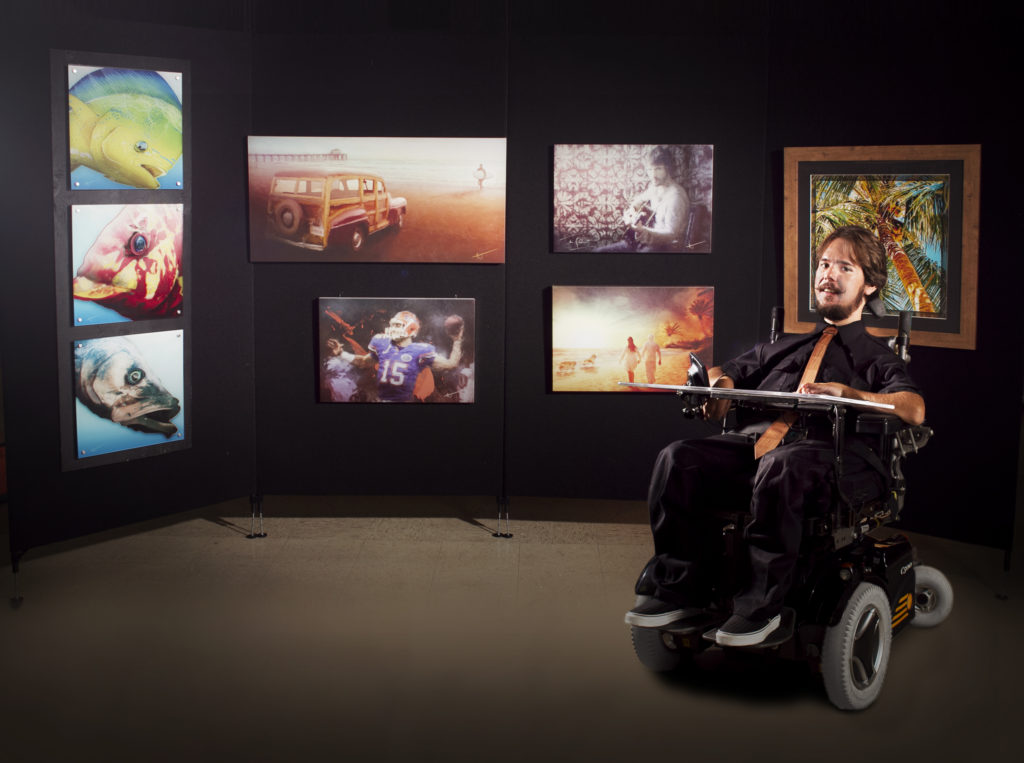 In addition to being a caregiver, Jo is also AJ’s business partner. In 2014, the Brockmans purchased a space in Lake Park, Fla. Shortly after, they opened The Brewhouse Gallery, which serves as both an artist’s co-op and a beer oasis. For Brockman, it was a dream come true. “I had been wanting to create an artist’s space for a long time,” he says. “I wanted to be able to help local artists out without charging a commission and enable them to make a living off their work.”

In 2015, the Brockmans bought the entire complex where the gallery is located. Today, the plaza is 100 percent occupied and also features The Kelsey Theater, a refurbished theater now acting as a national music venue. Combined, the two venues have helped to revitalize a once-neglected part of town.

The last few years have been a thrilling ride for Brockman, but he knows that living with SMA presents an uncertain future. This knowledge motivates him to live each day to the fullest. “I could lose the ability to use my hand in the future, but I’ll find another way to adapt,” Brockman says. “I don’t let it bother me. I’ve adapted and dreamt big my whole life, and I’m going to continue to do that.”

Help kids and adults like AJ continue to live longer and grow stronger.