Myasthenia gravis (MG) is an autoimmune disease — a disease that occurs when the immune system attacks the body’s own tissues. In MG, that attack interrupts the connection between nerve and muscle — the neuromuscular junction. 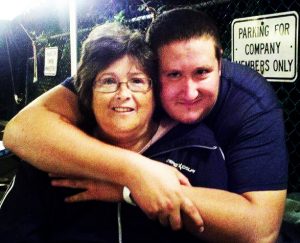 For the past 20 years, Gina Pieroni has been an avid fundraiser for the Muscular Dystrophy Association. The 56-year old from Nanuet, N.Y., has lived with the effects of myasthenia gravis, on and off for 33 years, and has raised more than $20,000 dollars for MDA.

A senior typist by day, Gina can be found outside of work raising money in a variety of ways, whether by reaching out to people on Facebook or being “locked up” as part of MDA’s popular fundraising event. She approaches her fundraising efforts with energy and enthusiasm, eager to help others living with various forms of muscular dystrophy.

“Paralyzed from my eyes to my toes”

Gina’s initial bout with myasthenia gravis at age 21 was nothing short of harrowing. The symptoms turned her life upside down literally overnight.

“One day I was fine,” Gina recalls. “Then, before I know it I was paralyzed from my eyes to my toes. My eyelids were completely closed. Then it got worse — chewing, swallowing, speech — it progressed throughout my body.”

Within a day, Gina was completely immobilized, which confounded doctors. It took 12 doctors over eight months before she received the proper diagnosis. During this time, she was unable to eat solid food because of choking concerns. However, after receiving a shot of the medication Tensilon from a neurologist who correctly realized she had myasthenia gravis, she recovered almost instantly.

She was talking within two minutes of the shot and could eat solid food minutes after.

“I hadn’t eaten for eight months.” Gina says. “I was choking on everything. The day I got the shot, I had a Big Mac, large fries and two chocolate shakes.”

Total remission would take 12 years. During this time, Gina had her son, Mark, who was initially born with the condition but recovered after a week. A regimen of Mestinon has kept Gina mobile for the past 33 years, although the effects are starting to wear off.

“The strength in my right side will not allow me to drive anymore,” says Gina. “I also have a little difficulty swallowing, but nothing like when I first had symptoms.”

None of this, however, has dampened her spirit or her enthusiasm to raise money.

As Gina tells it, her zeal for fundraising can be traced back to a summer night in 1997. On that night, she encountered a man named Bill St. George who was in the midst of a seven-day endurance challenge standing 35 feet high atop a cherry picker crane in Nanuet to raise money for MDA.

“I asked him, ‘What are you doing up there?'” Gina says. “He said he was raising money for muscular dystrophy. I was on vacation starting that day and I said, ‘I know what I’m doing with my vacation.’ That entire week, I ran around back and forth collecting money for him as he stood up there.”

Affectionately dubbed “Perchman,” Bill would become a close friend of Gina’s. He repeated the endurance feat for the next few years. Unfortunately, Bill passed away from a heart attack in 2012 at age 51. However, his desire to help others lives on through people like Gina, who was forever touched by his selflessness and generosity.

Today, Gina involves herself any way she can in fundraising. She has participated in Lock-Ups and has sought out donations through close friends on Facebook to support MDA. In doing so, she has raised more than $20,000 in the last 10 years, including more than $1,200 this year alone. She has been “absolutely shocked” by the kindness of others in the amounts they have been pledging.

Despite the harrowing circumstances of her initial paralysis and the resulting treatment over the years, Gina considers herself fortunate that her symptoms, for the most part, have been in remission.

“I feel lucky and blessed,” she says. “I didn’t end up in a wheelchair, and I know I am better off physically than those who are. I felt that I had to do something to help others with muscular dystrophy — especially kids.”

Help fund research for treatments and cures for myasthenia gravis and all neuromuscular diseases.