Gianna Schwartz was born to write. 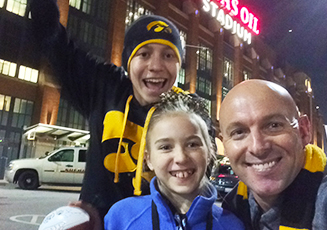 Just 10 years old, the fifth-grader from Bettendorf, Iowa, has already won writing contests sponsored by PBS and participated in poetry slams. She’s even written a children’s book that was purchased at an auction by a Major League baseball player.

Gianna — who is the Iowa State Goodwill Ambassador and lives with Charcot-Marie-Tooth Disease (CMT) — has always had a special talent for writing. Last month, at the annual Iowa Muscle Team Gala in Des Moines, Gianna shared with the audience a poem she had written thanking everyone who helped make MDA Summer Camp possible for kids like her.

The poem profoundly impacted everyone in the room.

The support of the MDA 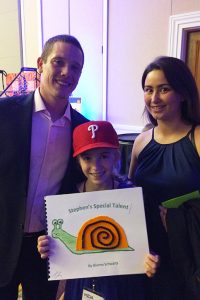 Gianna was born with bilateral clubfoot deformity, a dislocated hip and very weak lower extremities. However, her doctors weren’t sure what was causing these symptoms. Gianna received two misdiagnoses before age 7, when she was finally diagnosed with CMT.

Gianna’s parents, Monte and Nadia, say MDA was there for the family almost immediately.

“[The diagnosis] was a gut punch,” Monte says. “The MDA has been a great organization and very supportive. We could have been bitter and upset, but they helped us to get through it, and as a result, [Gianna is] a happier and more well-rounded child.”

Although today Gianna has difficulty moving her feet and is unable to walk for long distances, she truly lives unlimited. She plays in both the orchestra and band at school, and loves to, in moderation, go hiking and play golf. She is so active, in fact, the braces she wears for stability have broken several times.

MDA has been integral to Gianna’s development. She loved her experience at MDA Summer Camp at Camp Courageous in Monticello, Iowa, where she enjoyed zip-lining, swimming and making friends with other children who had CMT.

“MDA takes the attitude that kids can do anything they want to do — water, zip-lining, etc.,” Monte says. “They will make anything possible for these kids.”

This year, Gianna became Iowa’s MDA Goodwill Ambassador. Her travels have taken her all over the state, giving her the opportunity to meet supporters, including firefighters.

“The firefighters have been very supportive,” Monte says. “We have gone to Fill the Boot events and pancake breakfasts. In Clinton, the firefighters raised more than $10,000 for MDA.” 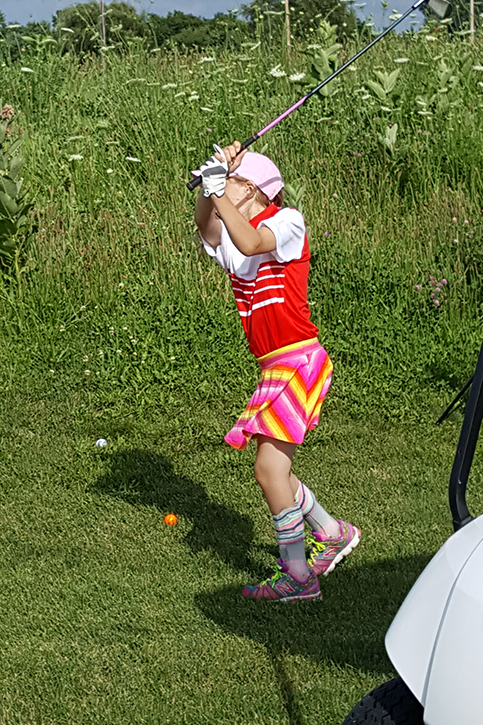 A night to remember

Although Gianna has many talents and is an exceptional student, what makes her truly stand out is her writing ability. She was the winner of a book-writing contest run by her local PBS station, allowing her to compete at the national level.

She shared her talent last month at the Iowa Muscle Team Gala. At the event — attended by corporate supporters, MDA families and local celebrities — one of Gianna’s books, “Stephen’s Special Talent,” was auctioned off. The book, about a snail named Stephen who discovers the one thing he is good at, was purchased by MLB pitcher and Iowa native Jeremy Hellickson.

But it was one of Gianna’s poems that stole the show.

The poem was originally written as a thank you to corporate sponsors who helped make the MDA Summer Camp experience possible for kids like her. Although not written exclusively about Gianna’s own symptoms, the poem highlights the experience of all kids with muscular dystrophy, including the friends with CMT Gianna made at Summer Camp.

Gianna shared her poem at the gala, and she gave us permission to share her meaningful art again here:

I cannot walk, my hands I cannot lift.

It’s hard run, to dance, to draw, and even sing.

It’s hard to smile to you; to eat, breathe, jump, and cough.

To sit and stand, to play and talk.

Then you came along and turned my world around. You stretched out your hand to offer help.

You give me wheelchairs, walkers, splints, and cough assist machines.

You helped me get to MDA camp where:

I went kayaking, swimming, zip-lining, sliding, crossed a rope bridge, tried to catch an egg with a hat.

Danced and twirled, caved, and went to sleep under a starry sky.

I sang, played with furry friends, and rode a motorcycle.

I even took my first steps in water, because you didn’t know I couldn’t.

I met new friends who did not judge my feet, hands, or speed, but rather said, “Let’s go and play.”

But as much as all of these things, you give me hope.

You research for a cure and never give up.

Please know that I will never give up either.

I’m so grateful for all that you do, THANK YOU!

Sign up to learn more about how you can help kids and adults like Gianna live longer and grow stronger.