When Jayden Long learned four years ago that the firefighters in his hometown of Nampa, Idaho, had to work on Christmas, he devised a plan.

“He wanted to deliver baked goods to the firefighters on Christmas day,” recalled his mother, Shellie. “So we baked just about all night and delivered trays of food to three or four firehouses in town.”

To anyone who knows 9-year-old Jayden, who lives with mitochondrial myopathy and is a two-time MDA State Goodwill Ambassador in Idaho, his plan for the firefighters is simply a reflection of the kind of person he is. 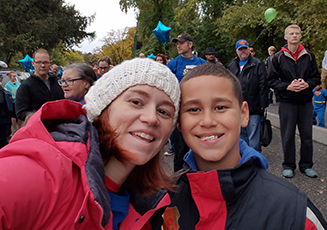 “I may be biased,” Shellie says, laughing. “But he really does have a heart of gold and is such a good kid.”

Although Jayden sometimes has trouble keeping up with physical activities, that does not deter him from being a normal kid and playing his favorite sport, soccer.

“Jayden loves sports, he loves to read and he has a lot of friends,” Shellie adds. “He is the center of attention wherever he goes.”

It also was the likely diagnosis for Jayden’s younger brother Jaxon, who tragically passed away from pneumonia in 2009 at 2-and-a-half months. Although not diagnosed formally, it is suspected that Jaxon, whom Shellie calls “Jayden’s guardian angel,” most likely also had mitochondrial myopathy.

Five years later, in December 2014, Shellie decided to get tested for the disease on the advice of a neurologist and found out that she had it as well. The diagnosis helped to explain the muscle weakness in her hands and legs and the extreme fatigue she had been feeling.

It was difficult news for Shellie to receive, but it helped to forge an even stronger bond with Jayden.

For the Longs, the support and kindness of others has made all the difference in living and thriving with mitochondrial myopathy. One group that has been especially kind to Jayden in his travels as Idaho goodwill ambassador are the local firefighters, who have been steadfast supporters of the MDA for more than 60 years. 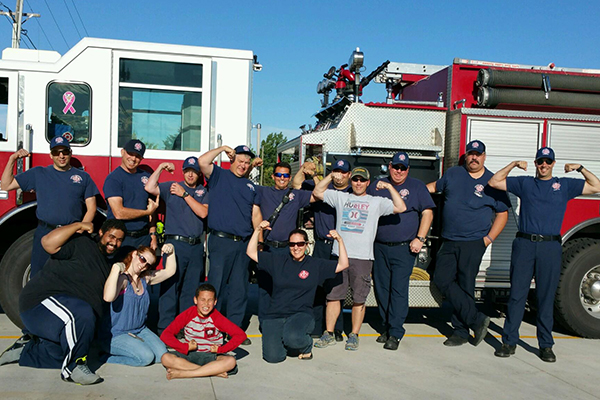 “The firefighters have been so good to Jayden. He looks up to them, and he gets to hang out with them at events and when they are filling the boot,” Shellie says. “They are his buddies.”

It was while he was hanging out with the firefighters that Jayden found out they worked on Christmas. He knew that if he was going to get gifts, they should, too.

Another opportunity for Jayden and Shellie to experience the wonderful support of the community has been by participating in MDA Muscle Walks. Team Jayden recently completed its third Muscle Walk on Oct. 15 in Boise.

Team Jayden comprises loving family and friends, including several of Shellie’s coworkers at T-Mobile, where she is a supervisor and an active member of their employee disability network. Muscle Walk has been a great venue for Shellie and Jayden to talk to other MDA families and meet locals from the community who come out to show support. 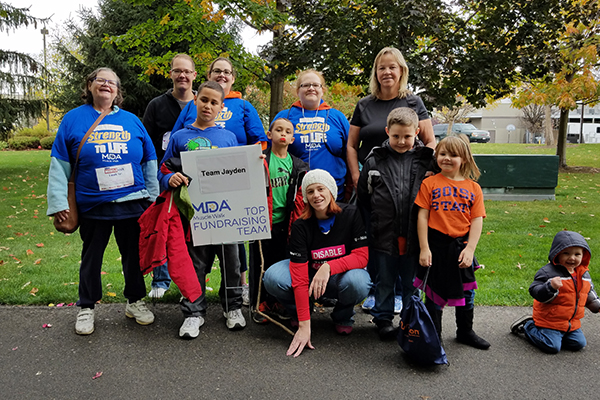 “I get goosebumps thinking about it,” Shellie says. “I am overwhelmed by the support from the community, even people without a direct connection to MDA, who support my son at the Muscle Walk and who donate to Fill the Boot during the year.”

One resource that has been especially helpful in Jayden’s development is MDA Summer Camp. Shellie calls the camp a “transformative experience.” At camp, Jayden has made several new friends with various forms of muscular dystrophy, and it’s had a significant impact on him.

“When Jayden came back, he was more adventurous and independent.” Shellie says. “He was a changed boy. The MDA has been a godsend for our family in providing education and resources.”

Jayden’s experience at summer camp and as a goodwill ambassador has motivated the Longs to give back to MDA by participating in events such as Muscle Walk. For Shellie and Jayden, it is an empowering experience.

“I walk for Jaxon and Jayden, so that one day the mission of the MDA is fulfilled and the MDA will no longer be needed,” Shellie says.

“I walk for kids with MD, to help raise money to send kids to camp, and for a cure.”

And as a further show of gratitude, this Christmas the Longs plan to deliver baked goods to all firehouses in Nampa — and if time permits, to the surrounding towns as well.

Make a donation to help kids like Jayden live unlimited!