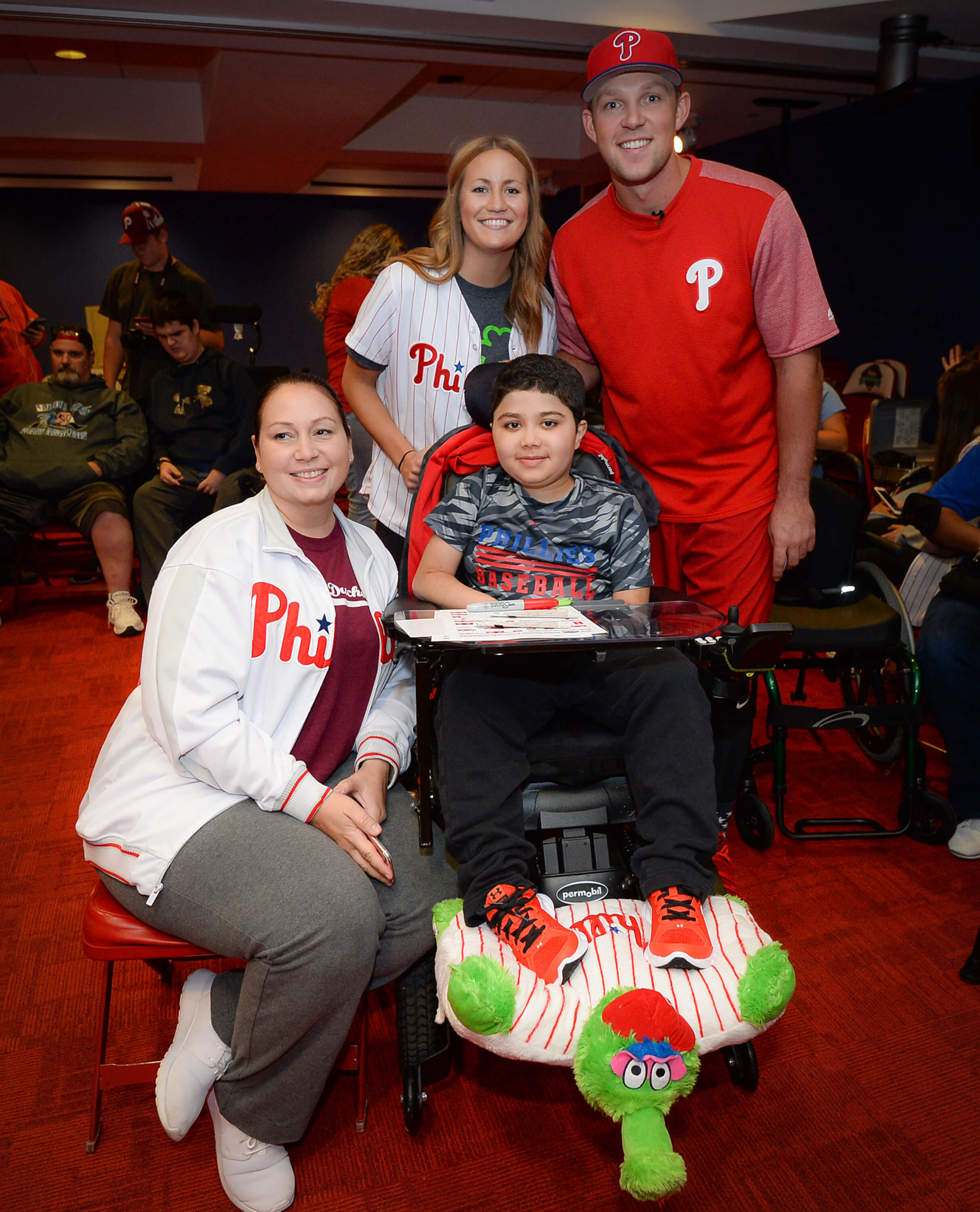 Since his call-up to the Philadelphia Phillies in August 2017, Rhys Hoskins has taken Major League Baseball by storm. A prolific hitter, Rhys burst onto the scene late last summer with a home run barrage that made national news and shattered rookie records along the way. In just 10 months he has become the face of a young and improving Phillies team.

Many athletes, when thrust into the limelight, use their newfound celebrity to help their local community or take up a cause near to their hearts. For Rhys, the cause is the Muscular Dystrophy Association. After spending two unforgettable summers as an MDA Summer Camp counselor in Northern California, Rhys knew he wanted to reconnect with MDA once he made it to the big leagues.

And he has done just that. In a short period of time Rhys has made a tremendous impact for MDA, participating in local events and befriending several MDA families along the way. On May 12, Rhys will be the emcee of the MDA Muscle Walk of the Greater Philadelphia Area at the Philadelphia Navy Yard. Leading the event and sponsoring a Muscle Walk team is an opportunity Rhys cherishes, continuing his support for an organization that provided him with so many wonderful memories as a teenager.

Part of Rhys’ graduation requirement at Jesuit High School in Carmichael, Calif., was to perform 50 hours of community service. When choosing what organization to volunteer for, Rhys relied on word of mouth to aid in his decision.

“I had some friends who were [MDA Summer Camp] counselors before and raved about how much fun they and the campers genuinely had,” Rhys says. “After I heard that, I knew it was something I had to be part of.”

Going into his junior year of high school, Rhys volunteered as a Summer Camp counselor at Sly Park Environmental Education Center, not too far from his home in the Sacramento area. Rhys bonded with his camper, Charlie, and had almost as much fun as the kids themselves. When it was over, he knew it was an experience he wanted to replicate the following year.

“It turned out to be a great idea,” Rhys says. “It really hooked me. I raved so much about the camp to my girlfriend [Jayme] that she joined me the next year as well.”

Rhys has kept in touch with several campers and counselors over the years. Although everyone has gone their separate ways, they are still close.

“There is a group of us that keep in contact on Facebook,” Rhys says. “It’s pretty cool to see where everyone is at in their life right now, compared to when we went to camp together.”

After graduating high school, Rhys went on to play baseball at Sacramento State University before being drafted by the Phillies organization in 2014. Although he was busy establishing himself in the minor leagues, Rhys tried to stay involved with MDA when possible, participating in the ALS Ice Bucket Challenge in 2014 and attending a Harley-Davidson sponsorship event while in Double-A. The Ice Bucket Challenge was an experience that he remembers fondly and made him think about what more he could do to make an impact.

“Until the Ice Bucket Challenge, people were not aware of the harshness of ALS,” Rhys says. “I remember wondering if there was something more I could do to get the ball rolling to raise awareness for MDA.”

Rhys quickly ascended through the minor leagues and received a call-up to the Phillies on Aug. 10, 2017. His impact was both immediate and historical. Rhys became the fastest player to ever hit 17 home runs, accomplishing the feat in just 33 games. The hitting spectacle thrust Rhys into the national spotlight and made him a household name overnight.

As he was hitting home runs, Rhys was working behind-the-scenes to re-establish a relationship with MDA. 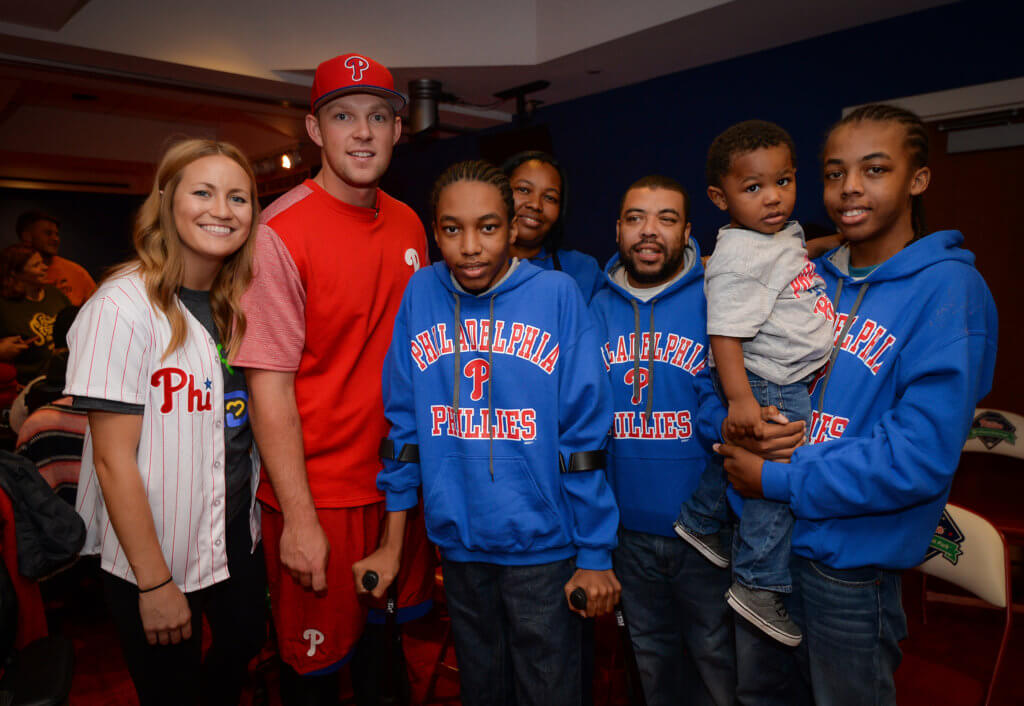 “Once I got called up to Philadelphia, my girlfriend noticed there was a Philadelphia chapter,” Rhys says. “We reached out to them and have become very good friends with the executive director [Amanda Sweet]. The relationship has taken off from there.”

Although a big leaguer for just 10 months, Rhys has already made an impact in the community. On Sept. 30 last year, Rhys hosted an event at Citizens Bank Park, the Phillies’ home ballpark, welcoming more than 100 Summer Camp counselors and kids. In December, Rhys attended a local Muscle Summit, which served also as an unofficial kickoff for this May’s Muscle Walk, where he met families and took pictures. And this April, Rhys teamed up with Collegeville Bakery, a Philadelphia-area restaurant, to sell “Rhys Shakes,” 20-ounce Oreo shakes chosen by Rhys himself. One dollar of every Rhys Shake went to MDA, and those who won an associated campaign raffle had the chance to meet Rhys in person.

All of Rhys’s efforts thus far will culminate on May 12, when he hosts the Philadelphia MDA Muscle Walk. In addition to emceeing, he will also be the sponsor of Team Hoskins, composed of family and friends.

Amanda is appreciative of all that Rhys has done on behalf of MDA.

“From the first day that I met Rhys, not long after he was brought up to play with the Phillies, I could tell he was 100 percent dedicated to supporting MDA,” Amanda says. “In a short period of time, I have had the pleasure of watching Rhys interact with numerous MDA families. Each time he gives them his full attention, inquiring about school, sports and everyday life. It is very evident that he is committed to not only helping fund the treatments and cures MDA is searching for but also to getting to personally know the kids and families living with muscle disease in and around Philadelphia.

The importance of volunteering

As a longtime supporter of MDA, Rhys appreciates how his visible platform can have an impact for the organization, especially in raising awareness for muscle disease.

“I think sometimes families are at a disadvantage because a lot of people don’t know a lot about these diseases, what’s going on in terms of research and advances in the field, and what families go through on a day-to-day basis,” Rhys says. “That has really stuck out for me and put things in perspective.”

For anyone interested in volunteering with MDA, Rhys emphasizes the friendships one can make as a major reason to get involved.

“And above all, being able to bring joy to these kids is so cool to see.”