Jake Roszelle is a “go big or go home” type of guy. Between Jake and his brother, their mom, Krista, is running out of room for all the plaques and medals.

“He’s a very spirited go-getter,” Krista says of Jake. “He just never took his disability to heart, I guess. He works 100 percent of the time.”

Krista remembers that when her son was a baby, he’d have trouble holding his head up. When Jake would crawl around the house, he’d drag his head on the floor. He started walking late and often used a scooter to get around.

Krista took Jake to doctor after doctor and finally, when he was 6 years old, Jake was diagnosed with a type of muscular dystrophy called congenital myasthenia DOK7.

The 13-year-old takes medication that helps alleviate his symptoms, but he still gets tired easily. But that certainly doesn’t stop him from doing whatever he wants to do.

“He just wants everyone to know, ‘This is my thing and even though I have muscular dystrophy, I’m going to rock it,'” Krista says.

And Jake does rock it. He rocks it hard.

Jake is on student council and in Junior Honors Society, where he recently received an award for doing the most community service. He swims, bowls and competes in gymnastics in the Special Olympics, where he’s won gold medals.

Jake routinely hauls in the most donations for his Shamrock locations and hits the pavement with his firefighter buddies for the Fill the Boot MDA fundraiser. 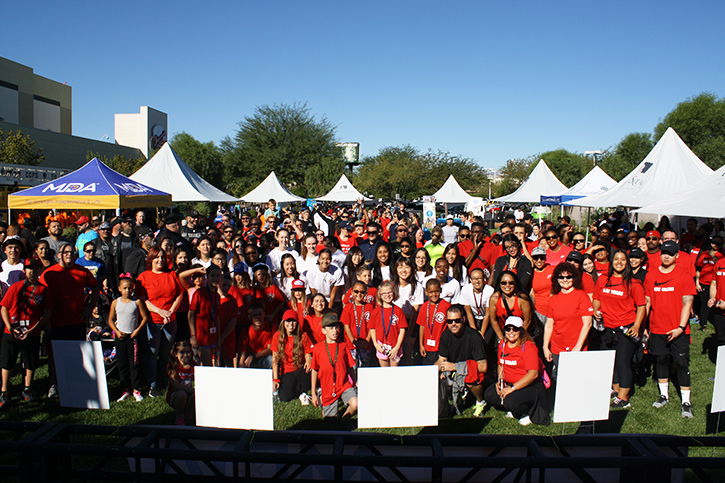 He’s participated in the MDA Muscle Walk of Las Vegas for four years, bringing the biggest team for the past two years running. And just how big is his team? Team Jake and Liam has a whopping 200 participants, many who know him personally.

“He wants to get awareness out there, like, ‘Look, I can still be president if I want to be. Just because I have this, doesn’t mean anything,'” Krista says.

Jake certainly has the makings of a president, but what he really wants to be is a K-9 police officer. Considering his drive, passion and talent for adaptation, Krista knows that somehow, some way, her son will do it.

“I’ve just always taught him you always give 100 percent. You always do better and bigger — just don’t ‘get by,'” Krista says. “And I’ve always taught him, don’t use your disability as a crutch. Yes, you were dealt something, but you can make something of yourself with this. And he does.”

Want to join in the MDA Muscle Walk fun?

Find a Muscle Walk Near You