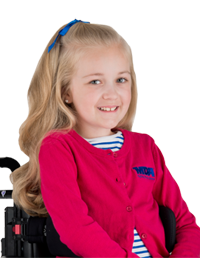 Reagan, 10, is the daughter of Jenny and Joe Imhoff. She is from New Berlin, Wisconsin.

Reagan has spinal muscular atrophy (SMA type 2), a genetic disease affecting the part of the nervous system that controls voluntary muscle movement. Type 2 SMA is a progressive muscle disease most commonly diagnosed in infancy. The biggest potential problems in SMA are respiratory muscle weakness, swallowing muscle weakness, and back muscle weakness with progressive spinal curvature. Reagan uses a power wheelchair, a feeding tube for nutritional supplementation, and BiPap to assist with breathing issues.

Reagan is a charming, happy and outgoing fifth-grader who enjoys art, social studies and recess.

Reagan loves reading, dancing, drawing, swimming, traveling, musicals and attending MDA summer camp. She enjoys art class and aquatic therapy and loves spending time with her family and friends. Reagan dreams of being an artist, a dancer and a nurse.

Beautiful and talented, Reagan served three terms as MDA’s Wisconsin State Goodwill Ambassador and brightened each day for everyone she met. In 2014, Reagan became MDA’s 39th National Goodwill Ambassador. That year, MDA announced Reagan’s term as ambassador at the world-headquarters of Harley-Davidson in Milwaukee Wisconsin. 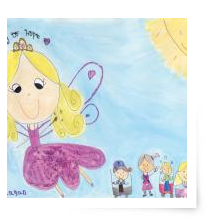 In 2012, Reagan lived out one of her dreams when she starred in a moving dance performance done from her power wheelchair; the segment was a highlight of that year’s MDA Show of Strength Telethon. During the 2013 broadcast, Americans got the chance to meet Reagan and her parents on a more personal level through a profile of the family.

Reagan also created “Fairy of Hope” specifically for the MDA Art Collection. Her colorful and bright artwork features a happy and beautiful fairy dressed in pink flying over three of Reagan’s friends — Bryson, Abbey and Ryder — as well as Reagan. According to Reagan, “The Fairy of Hope brings happiness and hope to children with muscle disease.

Reagan is very aware of the challenges she faces as a person with SMA, but she handles everything with courage and grace and never misses an opportunity to tell her story, speak about the support she receives from MDA and enlist someone in our mission to save and improve lives.

Beginning in 1952, when public awareness and understanding of muscle disease were almost non-existent, MDA put a human face on its mission by calling upon young people affected by these diseases to serve as National Goodwill Ambassadors, telling their personal stories and inspiring support of MDA. Former ambassadors have grown up to achieve distinction, earning advanced degrees and making their marks as published authors, popular musicians and artists and successful business professionals. Many continue in volunteer roles for MDA, serving on various committees on public awareness and appearing at large events to tell MDA’s story of progress.