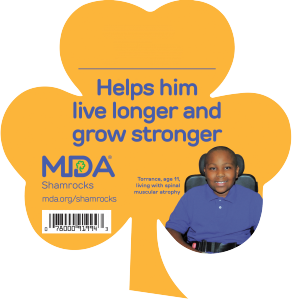 Most people fear public speaking. But most people aren’t like 10-year-old Torrance of Eastern Michigan. In fact, the former MDA Michigan state ambassador counts public speaking as one of his favorite activities.

For Torrance, who has spinal muscular atrophy (SMA) Type 2 and is one of ten “Shamrockstars” featured on gold MDA Shamrocks at retailers across the country in 2017, public speaking has also allowed him see more of the country and meet new people. He has spoken at more than ten events in four states, where he spreads positivity while also educating the world about muscular dystrophy and how it impacts his life.

Torrance’s diagnostic journey started with a keen observation by his mother, Katrina, who knew something wasn’t right early on. “I could see the signs since his birth: the poor muscle tone, not being able to walk or crawl and things like that. My motherly intuition said that something was wrong.”

However, a definitive diagnosis would prove elusive. Torrance and his parents traveled to six different hospitals throughout the Midwest, yet doctors time and again were unable to determine what to make of his symptoms.

His family
returned home, frustrated by the lack of answers and still fearful of what was wrong with their son. Katrina searched the yellow pages, found the MDA and gave them a call. “I told them something was wrong with Torrance that we couldn’t pinpoint. He was in and out of the hospital every week with pneumonia, and the doctors didn’t know what it was. The MDA said to bring him in.”

Katrina brought Torrance to the MDA Care Center in Farmington, Michigan, where he was evaluated by Dr. Eileen McCormick. “They looked at him, decided ‘let’s run some tests’, and right around Christmastime, right when he was about to turn one, he was diagnosed with SMA Type 2.”

Katrina was initially fearful of what the diagnosis meant for her son. “It was heartbreaking. I lived for a while in the dark until my son looked at me and said ‘Mommy, I’ll be OK’. Then I knew from that point forward I had to fight not just for him and his dreams, but for others with this horrible disease.”

The MDA was there for the Johnsons from the beginning, providing the support and education necessary for Torrance to live a full life. Under the guidance of Dr. McCormick and the MDA Care Center, the Johnsons learned that Torrance would need to change his diet and that they would have to acquire devices such as a cough assist, a wheelchair and a breathing machine.

With the proper support in place, Torrance today is an active fifth grader with many friends and a passion for math. His dream someday is to become a lawyer and a judge, professions that require superb speaking skills, which Torrance is already developing.

His proud speaking voice can be traced back to a bullying incident a few years back. One day, the bully pointed out to everyone that Torrance was in a wheelchair and teased him that he couldn’t walk. Rather than get upset, Torrance saw in this situation an opportunity to educate.

“Mama, I need to be able to express myself and not be afraid of being me!” Torrance told his mother shortly after the incident.

Katrina recalls that he loved to write, and speaking became a natural extension of that. “We used to have him write whatever was on his mind. Well, he took that same mindset and started talking [about his story] every chance he got. He would be at school, first talking to his teachers, then to other teachers. One day the principal came around and heard him speak from the hallway.

“He is an excellent speaker. One thing led to another, and different people started inviting him to speak at churches and then hospitals invited him.”

On stage, Torrance controls the narrative, talking about life with SMA on his terms. “He expresses why he’s on these machines, what they are, their purpose,” says Katrina. “He can tell you, ‘Hey, I have this disease, but I’m not letting it limit me'”.

His speaking has taken him to exciting places like Chicago, where he got to meet the CEO of the MDA, Steven Derks, along with former National Goodwill Ambassador Reagan Imhoff. “He loves to travel,” says Katrina, “and we take the machines wherever we go.”

Grateful for the Shamrocks and the MDA

The MDA Shamrock campaign is a powerful way for people to learn about and support individuals and families in their own communities living with muscular dystrophy.

Torrance particularly enjoys this season, as it allows him to visit several of the organizations who support MDA, including 7-Eleven, the Kroger Company, Lowe’s Home Improvement, National Association of Letter Carriers, Harley-Davidson Motor Co., and of course, local fire fighters. Funds raised lead to breakthroughs in the lab and also send kids to MDA Summer Camp, one of Torrance’s favorite activities. Last summer, Torrance spent a week at Camp Cavell in Lexington, Michigan, where he enjoyed casino night, swimming, and riding in a motorcycle sidecar.

“The money goes to so much stuff, and people that buy [the shamrocks] sometimes never realize that it helps someone locally,” says Katrina.

For Torrance and his family, the support of the MDA and its donors have made all the difference.

“I hate what this disease does to my son but it has made him more outspoken and limitless than I could ever imagine,” says Katrina. “He has touched so many people’s lives and my entire family has become closer because of him. Thanks to God and MDA, we are living unlimited.”