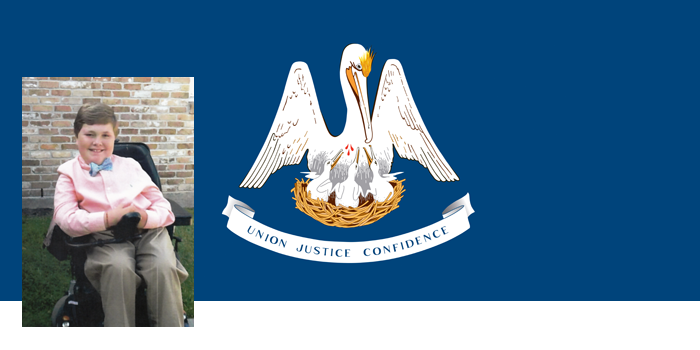 Rivers lives in the Greater New Orleans area and has a pet dog named Raven. He is a happy spirit and is very well-spoken. His mom says he has never met a stranger!

Spinal muscular atrophy (SMA) is a genetic disease affecting the part of the nervous system that controls voluntary muscle movement. The age at which SMA symptoms begin roughly correlates with the degree to which motor function is affected: The earlier the age of onset, the greater the impact on motor function. The biggest potential problems in SMA are respiratory muscle weakness, swallowing muscle weakness, and back muscle weakness with progressive spinal curvature.

Rivers is in the 6th grade. He enjoys Math, Science, and P.E. and participates in the after-school running club.

Rivers is a big LSU fan and tailgates at almost every home game! He likes outdoor activities including fishing and playing football.

On behalf of MDA, Rivers has traveled to Nashville to make an appearance at the Telethon. He attends Summer Camp and participates in various other MDA events such as the Muscle Team Gala, fundraising kick-offs, and the Muscle Walk! Rivers does it all and enjoys speaking about his love for camp!

Strengthened by Spinraza, Marley Robinson is Tackling College — and Planning for More